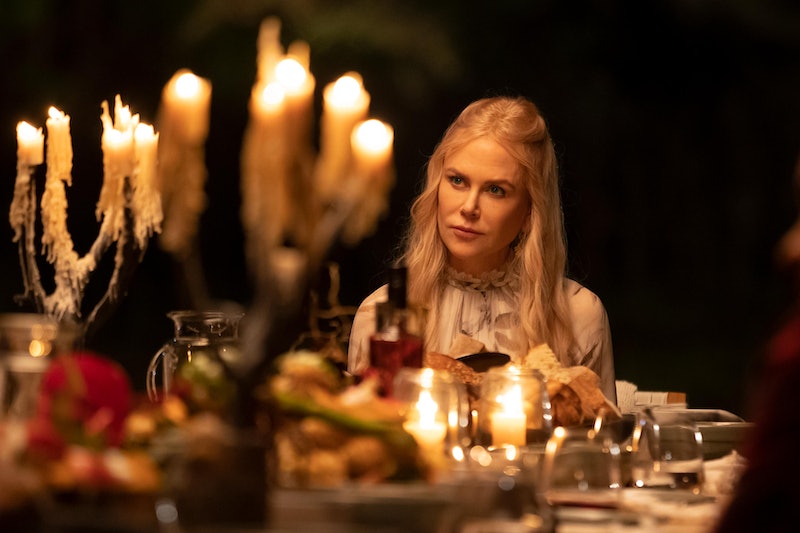 Spoilers ahead for Episodes 1-3 of Nine Perfect Strangers. There are a lot of questions hanging over Hulu’s trippy new drama Nine Perfect Strangers. Did Masha (Nicole Kidman) really survive a murder attempt before becoming Tranquillum’s enigmatic leader? Why did she select these particular guests for the retreat? And what’s up with the strange, co-dependent relationship between her and staffers Yao (Manny Jacinto) and Delilah (Tiffany Boone)?

By the end of Episode 3, the only thing that’s really clear is that Masha is definitely drugging the Tranquillum guests. Viewers are clued into this much earlier than the characters are. The opening credits imitate a hallucinogenic mushroom trip, and it’s overlaid with Unloved’s song “Strange Effect,” which includes the lines “You've got this strange effect on me.” Masha speaks to Delilah and Yao about using a “new protocol” that hasn’t yet been tested. And when the guests arrive, Yao informs them that they’ll be fasting and only drinking the smoothies provided — which are all “tailored specifically to [their] metabolic needs,” so they’re not allowed to share them or leave anything unfinished. Later, Delilah explains that they have their medical files and will be doing blood intake every few days.

Though this raises alarm bells in more cynical characters like Lars (Luke Evans), somehow most of the guests don’t find this particularly unusual or invasive. “Our desperate desire for personal transformation is so strong that we can give up our good sense,” author Liane Moriarty, who wrote the book the show is based after attending her own wellness retreat, told Entertainment Weekly.

It’s not until a day-long hike on day three, during which the guests are expected to forage for food, that everyone breaks down. The women end up swimming naked in a river and Heather (Asher Keddie) comes to the wild conclusion that her husband should have an affair while he’s at Tranquillum. The men overshare to each other without meaning to — wealthy Ben (Melvin Gregg) admits that he won the lottery while Tony (Bobby Cannavale) reveals he was a pro football player before he blew out his knee — and then they kill a goat. It’s only after sweet-natured Napoleon (Michael Shannon) gives a winding, biblical monologue in which he confesses he, not Tony, killed the goat to atone for his son’s death that Heather realizes something is very wrong.

“Have you been medicating us?” Heather demands. At first Masha looks startled, but then she gives a dark grin. Yes, it’s implied, of course she has. Though the episode cuts out right before we see the guests’ reaction, they have every right to be angry. Drugging someone without consent is illegal, and is even considered second degree assault in most states. (And they don’t even know yet that Masha’s also been sweeping their rooms and monitoring all of them on camera.)

While it’s pretty obvious that Masha has been giving them some sort of substance — possibly mushrooms, based on the visuals of the opening sequence — it’s not yet clear if everyone has been given an equal dose, or if some guests haven’t been dosed at all. (For example, the amount given to Tony, a heavy substance user, is probably going to be very different than what they give to Grace Van Patten’s Zoe, who’s only 20.) The major question now is whether or not the group will agree to continue with their treatments as planned — as some of them seem to finally be making progress — or if they’ll be angry enough at Masha that all hell breaks loose.

More like this
The 'Reasonable Doubt' Cast Includes A 'Save The Last Dance' Reunion
By Grace Wehniainen
18 Principal Ava Quotes That Prove She's The Queen Of Shade On 'Abbott Elementary'
By Grace Wehniainen
On 'The Handmaid’s Tale,' Christine Ko Fights Back
By Gretchen Smail
UK Viewers Will Have To Wait To Watch The Handmaid’s Tale S5
By Maxine Harrison
Get Even More From Bustle — Sign Up For The Newsletter