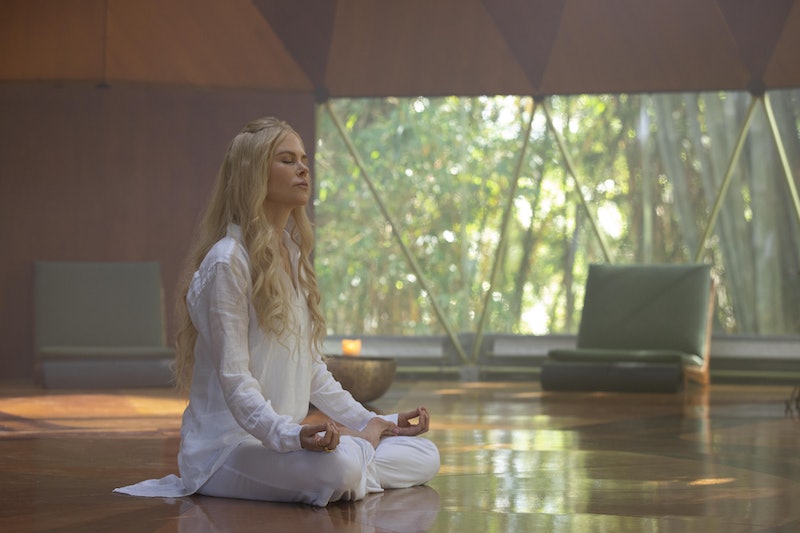 In the hair-raising Hulu limited series Nine Perfect Strangers, a group of (mostly) strangers checks into the same week-long wellness retreat on the same day. They’ve been hand-selected by the center’s charismatic founder, both for how their strengths might complement each other and the ways their flaws will constructively expose their worst traits. Basically, the guests were cast, not unlike the actors who play them.

It’s not the only time life came to imitate art on the set of the show. Because filming took place amid the coronavirus pandemic, the strangers in the cast really didn’t need to pretend to be marooned together. In the series, the wellness-seekers hand themselves over to the mysterious California resort where contact with the outside world is forbidden; in real life, the cast and crew descended onto a hermetic set in Byron Bay, Australia. The safety protocols in place meant that the group was stuck in close quarters together over the course of 18 weeks, with no assurances about which borders would still be open under what conditions by the time production wrapped. Regina Hall, who plays a single mother broken by her husband’s infidelities, tells Bustle that the cast was “lucky” that “everyone really did bond and get along.”

The same can’t be said of their characters, who over the course of one claustrophobic week become experts in how to hurt each other. The atmosphere at Tranquillum ranges from ecstatic to miserable, creating an intensity that could be tricky to detach from after filming. “I'm very guilty of that ... carrying characters’ energy off set,” says Manny Jacinto, who plays a Tranquillum staffer named Yao. “I had to check myself every once in a while and be like, ‘Oh wait, I'm not Yao right now.’”

Something that immediately bonds the Tranquillum guests is their collective impatience to meet Masha, the enigmatic Russian guru who designed the retreat and its wellness practices. The same sense of anticipation recreated itself when Nicole Kidman, who plays the character with a bewitching quietness, was initially absent from set. “We had been in quarantine. We had been in Australia doing our rehearsals,” remembers Hall, who surmises that Kidman’s separation from the rest of the cast was purposeful. “And it was like, ‘Is Nicole coming today? Is Nicole coming today?’”

Meeting Kidman in real life played out similar to how it does onscreen, with most of the characters sitting on the floor of a geodesic dome — Tranquillum’s Chakra Room — in the early days of filming. Kidman entered in full costume and makeup — a white, gauzy dress and long, ashy hair. When she spoke, it was with a gentle Slavic lilt. “I had never met her,” says Hall, and neither had her true-believer character. “Carmel was like, ‘Ahhh.’”

Jacinto remembers things similarly. “[Kidman is] actually an introvert, she's pretty shy, and I didn't expect her to be. Just shy at first, but still very open,” he recalls. “Right when she started talking, I just fell into this sense of devotion. I'm like, ‘Oh, I'll do anything for this lady. I don't know what it is about this lady, this woman, but I'll do anything for her.’ And I don't know if that's Yao or Manny. I'd like to think a bit of both.”

More like this
18 Principal Ava Quotes That Prove She's The Queen Of Shade On 'Abbott Elementary'
By Grace Wehniainen
On 'The Handmaid’s Tale,' Christine Ko Fights Back
By Gretchen Smail
UK Viewers Will Have To Wait To Watch The Handmaid’s Tale S5
By Maxine Harrison
Hulu’s Mike Tyson Series Is Unlikely To Return For Season 2
By Brad Witter
Get Even More From Bustle — Sign Up For The Newsletter