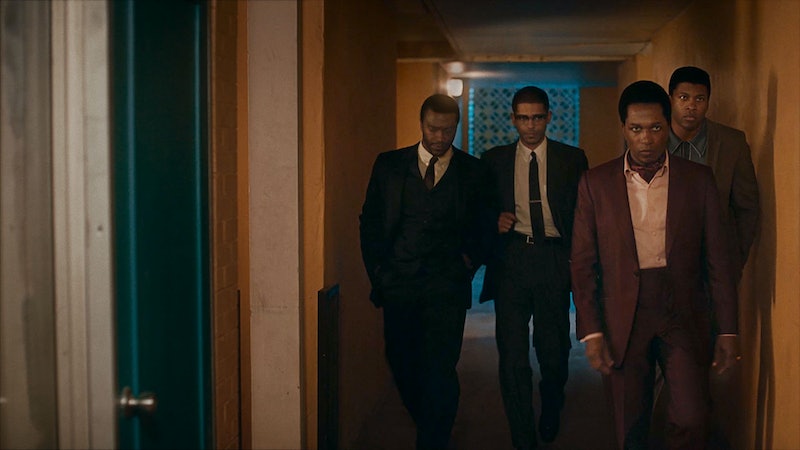 February 25, 1964 was one of the most monumental gatherings of Black voices in American history. Or, at least that's what it looks like in the new Amazon Prime Video film One Night in Miami. The movie depicts a one-night-only gathering between African American icons Malcolm X, Muhammad Ali (then known as Cassius Clay), Jim Brown, and Sam Cooke, with the four cultural titans gathering in a Miami hotel to discuss Black society in 1960s America and their roles in it as wealthy and influential Black men. But is One Night in Miami a true story, or is this meeting completely made up?

The movie was written by Soul co-writer Kemp Powers, and is based on his 2013 play of the same name. And although the conversations between the characters in the film are entirely fictional, the genesis of the story does actually come from a real meeting between the quartet. On Feb. 25, 1964 in Miami, 22-year-old boxer Cassius Clay defeated Sonny Liston to win his first-ever World Heavyweight Championship. After the fight, Clay celebrated his win at the Hampton House hotel with three other well-known figures: superstar NFL running back Jim Brown, chart-topping singer Sam Cooke, and civil rights leader Malcolm X. Brown, the only surviving member of the group, spoke about the night in a 2020 video for NFL Media Originals. "America racially in 1964 was embarrassing," Brown says in the video. "I was a good athlete, I got treated well as an individual, but all around me, Black people were being discriminated against. That was the nature of the country at the time."

The full extent of the conversation between the four men on that night will never be known, but it is now looked at as a turning point in their respective lives. According to the Sun Sentinel, The day after the meeting, Cooke released his protest song "A Change Is Gonna Come," signaling a major increase in his activity as a civil rights activist. Less than ten months later, he was dead at the age of 33, shot in a Los Angeles hotel by a white woman who faced no charges, per Rolling Stone. Two days after the meeting, Clay announced his membership in the Nation of Islam — a Black Power movement and religion that counted Malcolm X as one of its most influential members. Clay eventually adopted the name Muhammad Ali as part of his conversion. Malcolm X, meanwhile, left the movement the following month, disillusioned with the direction the organization had taken. He was shot and killed nearly a year later at 39, allegedly by slighted Nation of Islam members, as Bustle previously reported. And Brown, who retired from football two years after the meeting while still in his prime, continues to fight for racial justice and equality to this day.

One Night in Miami may not be an accurate account of the monumental hotel meeting between a group of Black American legends in 1964, but it is very much based on an actual historical event.