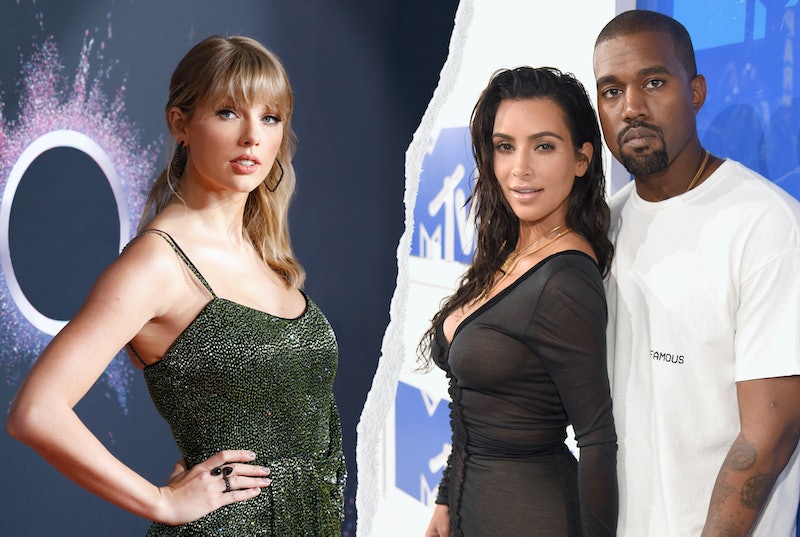 Swifties, rejoice: Taylor Swift's surprise ninth studio album Evermore has arrived just in time for the long winter ahead, and fans have already been hard at work decoding the lyrical Easter eggs in the Folklore companion album. As we know, a Taylor song isn't complete without nods to the singer's past drama, and fans are convinced that "Long Story Short" references Swift's feud with Kanye West and Kim Kardashian. In addition to the potentially revealing Kimye lyrics, fans also think the track addresses ex-boyfriend Tom Hiddleston, too.

The lyrics speak for themselves. In the song, Swift croons about a battle that resulted in her falling "from the pedestal." "I tried to pick my battles 'til the battles picked me," she sings. And she even sends a message to her past self at one point: "Past me, I wanna tell you not to get lost in these petty things, your nemeses will defeat themselves before you get the chance to swing." Swifties have cited the pop star's infamous 2016 feud with West and Kardashian — one of illicit lyrics in West's "Famous" and leaked phone calls — as the basis of this battle.

"Long story short, it was a bad time," Swift continues on the track. "Pushed from the precipice, clung to the nearest lips, long story short, it was the wrong guy." Many believe that the man she's referring to here is Hiddleston, whom Swift began a short-lived relationship with around the time of her highly publicized drama with West and Kardashian.

Much of Swift's fans were able to connect the timeline. "If only 2016 Taylor could know that by 2020 she'd be able to make a song like long story short," one fan tweeted. "LONG STORY SHORT YES BABE END KIMYE WE'VE STEPPED UP FROM THIS PETTY BULLSH*T," wrote someone else. Other listeners weighed in with their reactions, too.

"Long Story Short" also includes clear lyrical nods to Swift's current boyfriend, Joe Alwyn. After singing about the "wrong guy," Swift adds that she's finally met the right one. "Now I'm all about you, I'm all about you, ah," she sings, adding later that he "feels like home." There's been much speculation that Swift and Alwyn first met at the 2016 Met Gala, and long story short, the truth is in the timeline.

More like this
Kanye West Apologizes To Kim K "For Any Stress I Have Caused" In Rare Interview
By Jake Viswanath
Everything To Know About Taylor Swift’s 10th Studio Album, 'Midnights'
By Grace Wehniainen and Jake Viswanath
Kanye West Revealed The High Percentage Of Time Kim Kardashian Raises Their Kids
By Brad Witter
Taylor Swift Wants To Direct A Movie Next — But You Might Have To Wait
By Radhika Menon
Get Even More From Bustle — Sign Up For The Newsletter