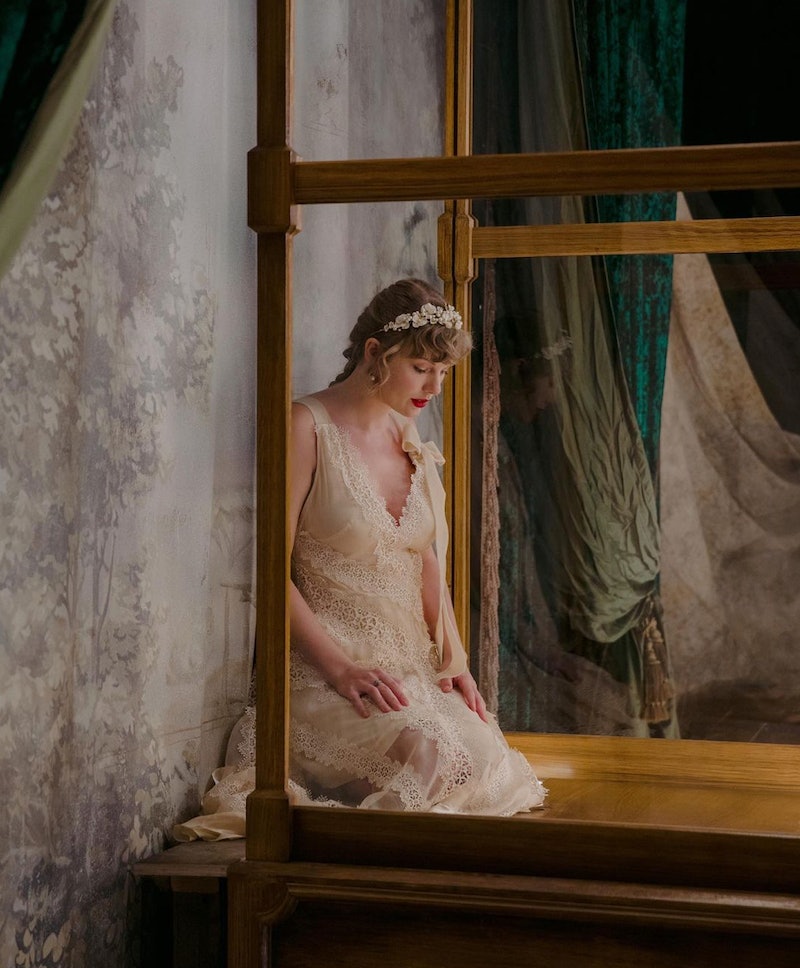 A new Taylor Swift album is upon us for the second time in 2020, meaning that the scavenger hunt for Easter eggs has begun again. Swift released her surprise new album Evermore on Dec. 11, marking her second surprise record of the year and her ninth studio album overall. And in typical Swift fashion, it turns out that the singer has actually been teasing the album for a few days now with cryptic hints and numerological clues, meaning that Swifties are now on high alert for more hidden messages to come.

Soon after Swift revealed the evermore tracklist, fans started looking for potential Easter eggs and parallels with its "sister album" Folklore. It's only a matter of time before all of Swift's clever clues and mentions are unearthed, so we've kept track of which ones you may have missed and all the Evermore lyrics you need to pay close attention to in order to enhance your listening experience.

Swift's Grandparents Get A Nod — Again

The thirteenth track on Folklore, "epiphany," is in part about her grandfather and his traumatic experiences as a military vet who fought in World War II. Track 13 (Swift's lucky number) on Evermore is called "Marjorie," which just happens to be the name of Swift's maternal grandmother. As the singer told Esquire in 2014, Marjorie Finlay was an opera singer and inspired her choice to pursue a career in music before her 2003 death. "She was always singing, either around the house, or every single Sunday she'd get up and sing in front of the entire congregation at church," Swift said.

In a note posted to Twitter upon Evermore's release, Swift confirmed that she wrote about her grandmother, who she notes "still visits me sometimes... if only in my dreams." The heartfelt track consists of witty and necessary advice passed down from Finlay herself. "Never be so kind you forget to be clever / Never be so clever you forget to be kind," she sings. What makes this even more sentimental is that Finlay herself can be heard singing in the background, giving us the comfort and wisdom so many people need from our grandmothers in 2020.

One Of Swift's BFFs Shows Up

Swift finally collaborated with her longtime friends Haim on the new song "No Body, No Crime," but the sister trio did more than just lend their voices to the track. Member Este Haim just happens to be the central character of the story about a woman who had no choice but to murder her man and the friends who help her cover up the crime. "Good thing Este's sister's gonna swear she was with me," Swift sings with absolute glee. In her YouTube chat before the "Willow' video premiere, Swift confirmed that she used one of her best friend's names in the track, which was inspired by true crime podcasts and documentaries.

Evermore may be Folklore's sister album, but Swift took it one step further and gave her previous surprise album a special shoutout on the sparkly track "Gold Rush." "My mind turns your life into folklore / I can't dare to dream about you anymore," she sings, emphasizing the album title for a dramatic, dreamy effect.

One of the best parts about a new Swift music is traveling back in time and finding all of the clues she dropped beforehand. And despite Evermore's surprise release, there were plenty that Swifties totally missed. Just a day before she announced the album, she straight up gave us one of the song titles, "Tis the Damn Season," while sharing her Entertainment Weekly photoshoot on her Instagram story.

However, the Evermore references actually date back to last month. On Nov. 22, Swift shared her infamous "not a lot going on at the moment" selfie, which fans initially thought referred to her re-recording her masters or releasing her Folklore: The Long Pond Sessions film on Disney+. But pictures of willow and ivy plants can be seen in the background, which we now know refer to new songs "Willow" and "Ivy," meaning she's been teasing Evermore this whole time.

Swift is a noted fan of numerology; she even released Evermore the weekend of her 31st birthday because 31 is her lucky number 13 backwards. So, it should come as no surprise that eagle-eyed fans could detect that she was about to release her ninth studio album via a recent tweet that used nine emojis. "Over here in folkloreland we feel great about it. Thanks @latimes!" she wrote in response to the newspaper's inclusion of Folklore in their Best Albums of 2020 list, complete with exactly nine Christmas tree emojis. In addition, the tweet was posted on Dec. 9. She announced Evermore the very next day. Mind blown.

Swift Dropped A *Huge* Hint About "Willow" In Early December

Earlier in December, Swift may have dropped another hint to a lyric on the album in a Twitter post. The singer tweeted a response to being featured on Rolling Stone's 50 Best Albums of 2020 list, writing about throwing herself "to the base of a willow tree by a reflection pool at midnight." "Willow," we now know, is the first single from Evermore and the video features a reflection pool at midnight.

If Evermore proves anything, it's to never underestimate what Swift may be up to.

More like this
Twitter Is At Odds Over Taylor Swift’s Possible ‘All Too Well’ Oscar Run
By Brad Witter
Taylor Swift & Her Mom Clap Back Against The “Shake It Off” Plagiarism Lawsuit
By Jake Viswanath
Who Plays Trent In 'Never Have I Ever'? Benjamin Norris Calls His Character A “Himbo Stoner”
By Grace Wehniainen and Radhika Menon
Gabby & Rachel Reveal How That 'Bachelorette' Rose Ceremony Twist Happened
By Grace Wehniainen
Get Even More From Bustle — Sign Up For The Newsletter