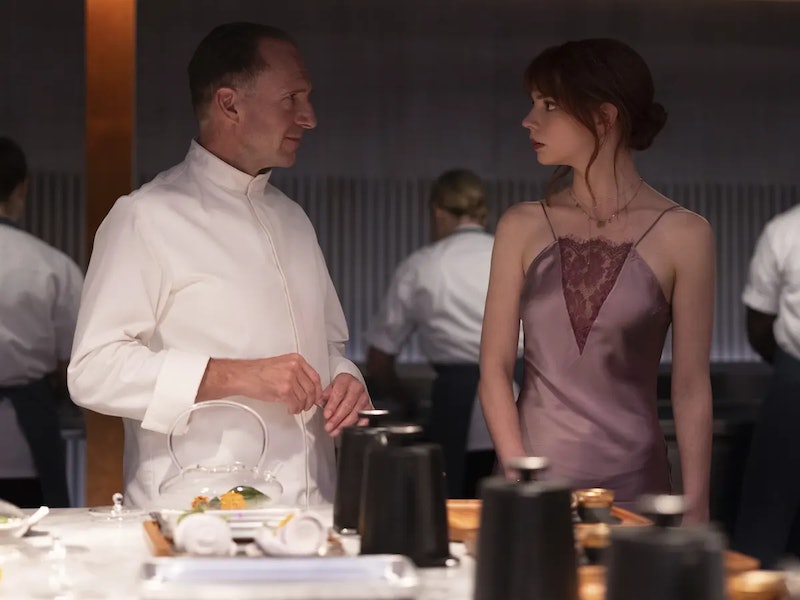 If you’re a fan of Glass Onion: A Knives Out Mystery, you may also take a liking to The Menu. Streaming on Disney+, the dark comedy thriller follows a group of chefs who are invited to an island for an exclusive restaurant experience. But before long, events quickly take a dark turn as they soon discover they will die. The Menu stars some familiar faces including Anya Taylor-Joy, Ralph Fiennes, and Nicholas Hoult. But is the film based on a true story? Find out below.

You’ll be relieved to learn that the ultimate answer to this question is: no. However, there is definitely some real-life inspiration involved. The Menu co-writer Will Tracy took inspiration from his honeymoon to Norway a few years ago, during which he took a boat to a restaurant on a private island. After arriving on the island and watching the boat sail away, Tracy — who is “a bit claustrophobic” — began imagining all the things that could go wrong. Following the experience, he brought the idea to his screenwriting partner, Seth Reiss (Late Night With Seth Meyers), and the rest is history.

The director of the film, Mark Mylod, was dedicated to ensuring that it very much felt like a real experience for the actors involved, apart from the bit where the characters die, of course. This led Mylod and the film’s producers to hire Michellin-starred chefs to create nine dishes that make up the menu in the film. In an interview with Vanity Fair, Crenn, the owner and head chef at Atelier Crenn in San Francisco said: “Usually, they have prop food in film. But it doesn’t taste like anything, it doesn’t look beautiful... I said to the director I wanted to make the food as if they were eating at a restaurant.”

More like this
Gerard Butler Insisted On Adding This Pivotal Scene To 'Plane'
By Catharina Cheung
Jemima Khan Used Her Own Life As Inspo For 'What’s Love Got To Do With It?'
By Darshita Goyal
Stephen Graham & Steve McQueen Are Working On A Wartime Drama
By Darshita Goyal
Channing Tatum “Nearly Killed” Salma Hayek During 'Magic Mike' Lap Dance
By Sam Ramsden
Get The Very Best Of Bustle/UK
Sign up for Bustle UK's twice-weekly newsletter, featuring the latest must-watch TV, moving personal stories, and expert advice on the hottest viral buys.