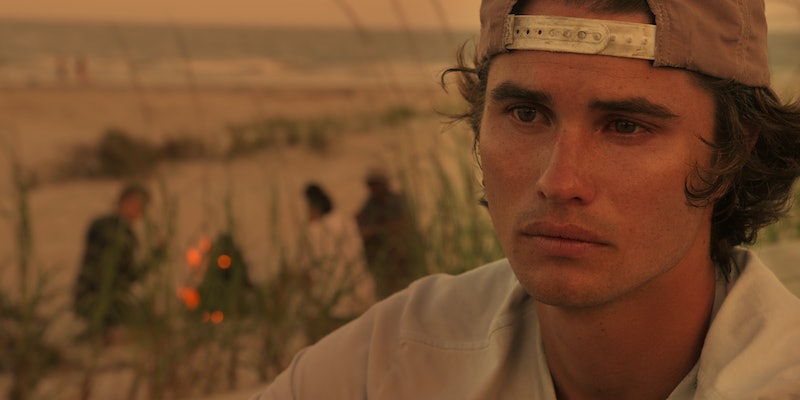 As Pogues, John B, Kie, JJ, and Pope are at the bottom of the food chain on Outer Banks. Their desire to make money and live out their dreams is what drives their adventures, leading them on a treasure hunt for the Royal Merchant‘s gold in Season 1 and the Cross of Santo Domingo in Season 2.

The end of the second season leaves it unclear if the mythology behind the treasure is real — namely if the mystical shroud Limbrey believes will heal her actually exists, or works for that matter. But the show does indeed take inspiration from real life. Denmark Tanny, for example, is based on a Black freedman from the 1800s, while the shroud is based on a religious relic called the Shroud of Turin. The Royal Merchant, too, is a real ship — well, kind of.

Outer Banks kicks off when John B discovers that his father, Big John, inscribed a clue about the Royal Merchant on his compass before he went missing. This leads them on a wild goose chase to find the sunken ship, which carried about $400 million in British gold. They actually do find the gold in a well (under an axe murderer’s house, because sure), and along the way they learn more about Denmark Tanny, the sole survivor of the wreckage.

In the show, the belief is that The Royal Merchant sank off the coast of North Carolina during a storm in 1829. This does draw from real life to an extent. There was a ship called The Merchant Royal, and it was captained by a man named John Limbrey, similar to Carla Limbrey’s ancestor in the show. But instead of existing in the 1800s in North Carolina, The Merchant Royal sank in 1641 off the southern coast of England. Unlike the show, it also had numerous survivors. Though 18 men drowned after the ship began leaking due to wear and tear, 40 crewmen, including Limbrey, were rescued by its nearby sister ship, the Dover Merchant.

According to the Telegraph, The Merchant Royal is often referred to as "the El Dorado of the seas," since it's said to have carried £1 billion in gold and silver (about $1.5 billion USD). The Merchant Royal has never been found, but an anchor thought to be from the ship was discovered by a fishing boat off the Cornish coast in March 2019.

"It's an admiralty patterned long shank anchor, the right type for The Merchant Royal," Mark Milburn, co-founder of Cornwall Maritime Archaeology, told the Daily Mail. "From what I see in the pictures it is the same design as ones used in the 17th century."

However, Milburn cautioned against anyone trying to dive down to look where the anchor was found, since it was discovered in a notoriously deep area (about 300 feet). "It's a serious dive," he said. "It takes a lot of the right equipment and most divers know that."

If someone ever finds The Merchant Royal, they'll have to inform their local coroner's office due to the UK's Treasure Act 1996. So they may not necessarily get to keep the gold — especially if a museum wants the recovered ship.

Something similar played out in 2007, when the Odyssey Marine Exploration of Tampa, Florida found “a half-million coins, and a number of artifacts” off the coast of Florida. The $500 million haul was dubbed “the Black Swan,” and per NPR, many initially believed it was The Merchant Royal’s treasure. The company brought the treasure back to the U.S., but according to Tampa Bay Online, Odyssey was then ordered to hand over the treasure to Spain in 2014, as it was decided that the coins were from the 1804 shipwreck of the Nuestra Señora de las Mercedes.

Outer Banks Is Home To A Ship Graveyard

There are plenty of shipwrecks that are in fact lying at the bottom of the Outer Banks — nicknamed the Graveyard of the Atlantic due to its treacherous waters and tiny islands that make navigating so difficult. According to the region's official website, there are about 3,000 shipwrecks in the Outer Banks, and you can even kayak or scuba dive out to some of them. These include The Huron, "The Triangle Wrecks" (the remnants of The Kyzickes and Carl Gerhard, which rest in a triangular shape), The Pocahontas, The Oriental, and "The Winks Wreck.”

It’s likely that Outer Banks draws from many of these ships’ histories. For example, The Huron sank in 1877 due to heavy winds and a faulty compass, according to North Carolina’s Office of Archaeology. The Oriental sank in 1862 for similar reasons, and parts of it are visible from land. Neither were carrying mountains of gold, but as the Office of Archaeology notes, collecting any artifacts from these wrecks is definitely illegal. So while these ships don’t share much in common with the Royal Merchant, Outer Banks is clearly paying homage to the area’s history.