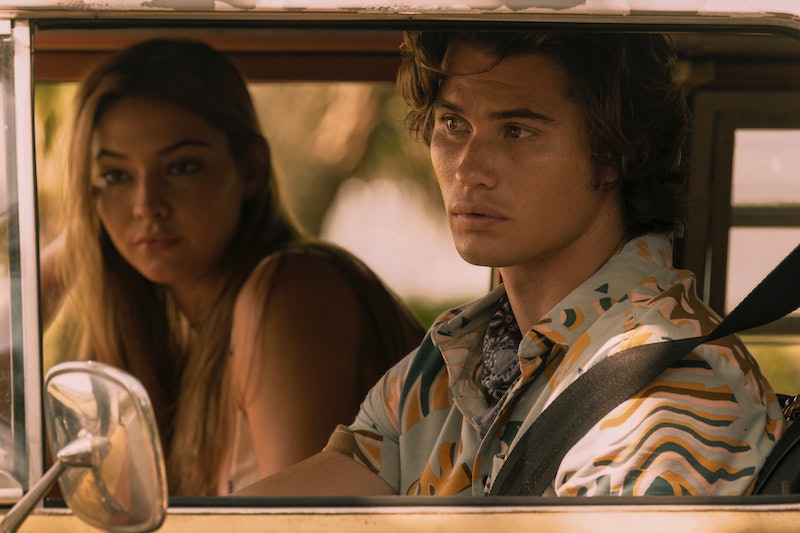 Netflix’s teen soap Outer Banks is a cross between the surf culture of The O.C. and a Goonies-esque treasure hunt. Set in North Carolina’s coastal Outer Banks islands, the show follows several scrappy teen “Pogues” who clash with the rich “Kooks” on the other side of the island. After his father goes missing, John B (Chase Stokes) and his friends set out to finish what his dad started: finding the Royal Merchant, a British ship lost at sea in the 1800s that held $400 million in British gold.

They actually manage to find the ship early on, but with a bunch of bad guys on their tails, things quickly spin out of control. The season ends with the Pogues split up, the main villain still on the loose, and John B framed for murder. It’s a lot to take in, so with Season 2 on the horizon, here’s a reminder of everything that went down in Outer Banks Season 1.

At the start of the show, protagonist John B is living alone and dodging child protective services. Nine months ago his dad, Big John, mysteriously disappeared while on a treasure hunt. But he and friends JJ, Pope, and Kie get a major clue about Big John’s whereabouts when they find his old compass.

Inside the compass is the message “Redfield,” which John B eventually figures out is a reference to his great-grandmother Olivia. After squeezing inside Olivia’s crypt, they find a map of the Royal Merchant wreck and a recording of Big John telling John B to finish what he started.

After stealing a water drone, they discover the Royal Merchant about 1,000 feet down. But when they explore the ship, they realize there’s no gold — meaning someone, at some point, already took it.

Enter Sarah Cameron, the so-called princess of the Kooks and daughter of John B’s employer, Ward. A former friend of Kie’s, she initially clashes with John B. But they grow closer after he wipes out in front of Sarah while running away from child protective services and she patches him up.

The two fall for each other, and John B dramatically confesses his love in the rain. At that point, they seem to have only known each other for a full day or so, but sure!

From a picture in Sarah’s home, John B gets a new clue about the gold: she lives on Tanneyhill, a plantation once owned by a freedman named Denmark Tanny. John B recalls that Denmark was on the Royal Merchant, and if he bought a plantation, he was probably the sole shipwreck survivor who escaped with the gold.

Sarah and John B sneak off to the University of North Carolina to study Denmark’s diary, where they find a letter he wrote to his son in Gullah, a creole language. With the help of a teacher, they discover that on the day Denmark was lynched, he told his son to “harvest the wheat near the water in parcel nine forthwith.”

John B eventually realizes wheat is slang for British gold, and wherever parcel nine is on Tanneyhill is likely where the treasure is buried.

They Visit An Ax Murderer’s House

Parcel nine turns out to be the property of a scary old woman who is rumored to have killed her husband with an ax. John B and his friends sneak into her basement and discover a hidden well there. As they usually do, they end up loudly bickering, and the woman wakes up and chases them around with a shotgun. But John B manages to rappel down the well, and inside a secret tunnel he stumbles upon the gold. The woman chases them all out, but John B escapes with some of the treasure.

At some point, the two bad guys who’ve also been searching for the Royal Merchant end up dead in the water, and it turns out that Sarah’s dad Ward is the one who killed them. Though he pretends to be a good guy, he’s actually connected to most of the criminal enterprises on the island. He also has several cops in his pocket, like Deputy Shoupe.

Most importantly, Ward has been hunting for the Royal Merchant for years, and he’s the one who betrayed and killed Big John. When Ward overhears John B and Sarah talking about finding the gold, he commissions a private jet to fly the gold to his own home in the Bahamas.

John B manages to stop the plane, and good cop Sheriff Peterkin arrives to arrest Ward for Big John’s death, which she’d been investigating all along. But Ward’s son Rafe, a cruel criminal and heavy substance user, shoots Peterkin to save his dad. Chaos ensues, and Ward purposely waits for Peterkin to bleed out rather than call for help. He then pins her murder on John B.

This makes John B a fugitive, so he escapes into a storm with JJ’s boat. When Ward realizes Sarah is with him, he begs John B to turn around, but in response John B announces over walkie-talkie that Ward murdered his father.

John B And Sarah Somehow Survive

In very Romeo and Juliet fashion, Sarah tells John B, "I'd rather die than be without you,” as they sail into the storm. They very nearly do die out when their boat capsizes. But they miraculously survive and get rescued by a passing boat after using a gold bar to reflect light. They head to Nassau to reach Ward’s home — and the treasure — before he does. Meanwhile, the Pogues at home grieve, believing their friends are dead. Elsewhere, Rafe and Ward are still on the loose. And with Ward’s many connections around the island, it’s unclear if the cops will ever take the Pogues’ word over that of a Kook’s.