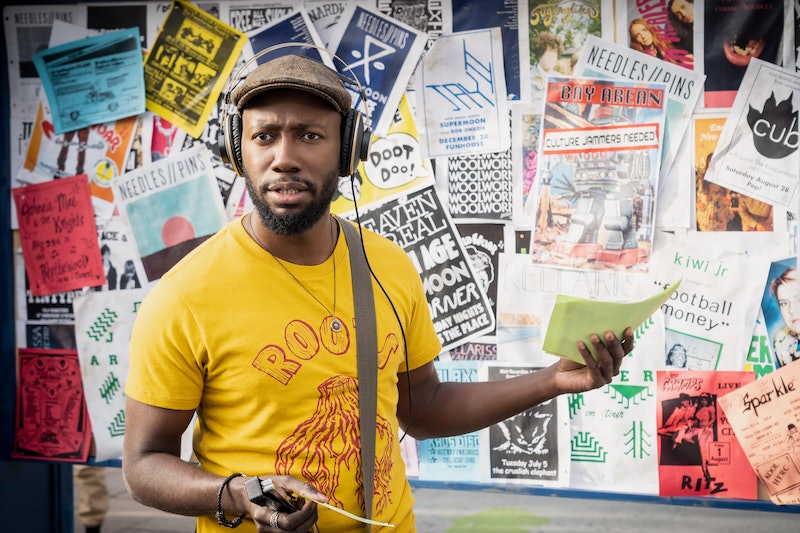 In Hulu's new comedy Woke, Black cartoonist Keef (Lamorne Morris) just wants to "keep things light" with his goofy Toast and Butter comic strip. But he finds it difficult to keep his work apolitical after a run-in with cops awakens Keef to police brutality and systemic racism. And while Keef's Toast and Butter comic is not real, Woke is based on co-creator Keith Knight's real life and work, and particularly his autobiographical The K Chronicles comic strips.

In the first episode of Woke, Keef — Knight's stand-in in the show — is ecstatic when Toast and Butter is picked up for national syndication. Similar in style to Calvin and Hobbes, Keef's comic is focused on cheerful pieces of toast and butter, and the sensibility is more word puns and dad jokes than scathing social commentary. "Nope!! I don't do tanning beds!!" one comic reads as Butter stomps away from Toast in a toaster.

It's this defanged, family-friendly approach that leads to Keef's rise to stardom. "You're on the way to the top. Newspapers, TV shows, movie deals," his friend says in the Woke trailer. Based on the nature of the comics, audiences always seem surprised to learn that Keef is a Black cartoonist. At first, this doesn't bother Keef, and in fact, he seems to enjoy defying expectations. "Why is it that people of color are always having to stand for something?" he says when a Black editor asks him to include racial commentary in his work. "I'm just a cartoonist."

This all changes when he's racially profiled by cops in the park because he fits the description of a suspect. That traumatic event did happen to Knight in real life, but according to The Washington Post, by then he was already using his work to talk about injustice. At that time in the 1990s, Knight was living in San Francisco and including his experiences in the music and indie comic scene in The K Chronicles. “I would do a cartoon about race or racism, and then three about other things,” Knight explained. After his experience with the cops, Knight started to focus more on creating purposefully political comics. The K Chronicles encompasses that shift, and Woke is directly inspired by that long-running series, which ended in 2010.

Ultimately, though Knight pitched and co-wrote Woke, it's a retelling of his own experiences that takes some liberties with the details. Though Toast and Butter is drawn in the same style asThe K Chronicles, they're really about two very different topics, and with very different aims. Toast and Butter is more reminiscent of Knight's early work, when he used to draw Mad magazine-inspired comic strips as a kid, while The K Chronicles is a much more mature and personal piece of work. Woke, then, serves as the ultimate way for Knight to reflect on his journey as both a cartoonist and an activist.