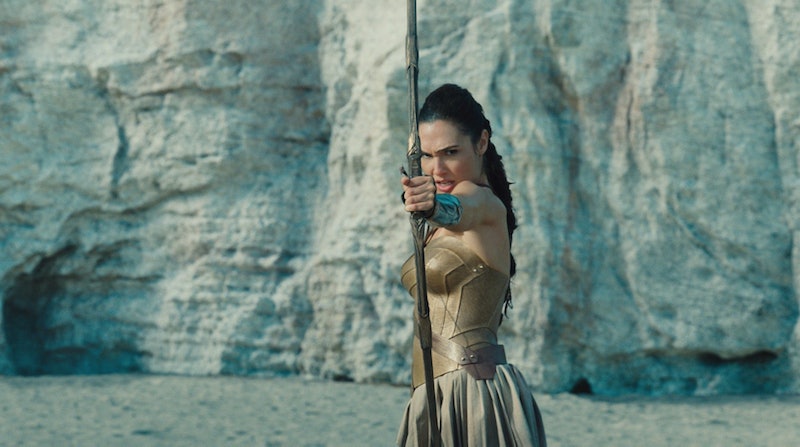 When it comes to superheroes, Wonder Woman is pretty unique. She has unusual gear, like her Lasso of Truth and Bracelets of Submission, and a wild origin story that involves her being molded from clay and brought to life by Zeus on the island of the Amazons. That origin sounds like it's straight out of Greek mythology, but is Wonder Woman based on a Greek Goddess? She certainly seems like she could have been written about by Homer, but do her roots stretch back that far?

Despite the many elements of Greek mythology that are wrapped up in her own mythos, Wonder Woman is a wholly original character. Created in 1941 by William Moulton Marston, who's also known for having a hand in creating the polygraph, he wanted to create a superhero who fought with truth and love rather than brute strength. His wife, Elizabeth Holloway Marston, suggested that the character be a woman, and William concurred. He then based the character partly on his wife and partly on his mistress, Olive Byrne, who lived with him and his wife in a consensual polyamorous relationship. So how then, from this modern and grounded origin, did Wonder Woman become all mixed up in stories from ancient times half a world away?

It's likely that Wonder Woman was made to be an Amazon because of feminist ideals at the time. Marston was a feminist, and he wanted his hero to be an equal to the male heroes of the day. According to the New Yorker's Jill Lepore, early twentieth century feminism was fascinated by the idea of an ancient matriarchal society, and Marston was very much a part of that scene. And since there's no better known example of an ancient matriarchal society than the Amazons, they seemed like a natural fit for Wonder Woman. But the Greek connections don't stop with the Amazons.

Wonder Woman grew up on Themyscira, the home island of the Amazons. Her creation at various times has involved Aphrodite and Zeus, both actual Greek Gods, and one of her greatest nemeses is Ares, the classical Greek God of War. Wonder Woman's mother is Hippolyta, Queen of the Amazons, who also filled that same role in Greek mythology. But one big difference between Greek mythology and DC Comics is that the Hippolyta of Greek myth never had a daughter. In the comics, her daughter is of course Diana, AKA Wonder Woman, whom she molds from clay. And while Diana is the name of the Roman Goddess of the Hunt — whose Greek equivalent is Artemis — Wonder Woman is not actually an interpretation of that character.

Wonder Woman's history is undeniably intertwined with the stories of Greek myth, but Wonder Woman herself is not based on a Greek Goddess. She was created to be a champion of feminism in the 20th century, and she's continuing that fight well into the 21st.

And when it comes to the hotly-anticipated sequel, Wonder Woman 1984, director Patty Jenkins had a lot to say about Diana's newfound perspective on feminism and how it works in the "real world." "The interesting thing about Diana to me is seeing feminism through the eyes of someone who's absolutely oblivious that it would even be an issue," Jenkins told Syfy Fangirls. "And that was what I loved in the first movie. It's like she has no chip on her shoulder. It never occurred to her that you would not see men and women as absolutely equal. Here I think she continues to just be her own sole person, but now she's aware. So now you see this awareness of like, 'Oh, okay, this is different and that's different, and there is a relationship to it,' and people are reacting to her as they work."

More like this
Netflix Shut Down 'Bridgerton' S3 Rumours About A “Very Dark” Storyline
By Bustle
Bill & Frank’s 'The Last Of Us' Episode Has Twitter Emotionally Wrecked
By Alyssa Lapid
'Wednesday' Star Emma Myers Thinks A Wenclair Storyline Is “Possible” In Season 2
By Alyssa Lapid
Jessica Simpson On The Time She Was Pursued By A Backstreet Boy & An *NSYNC Member
By The Editors
Get Even More From Bustle — Sign Up For The Newsletter
From hair trends to relationship advice, our daily newsletter has everything you need to sound like a person who’s on TikTok, even if you aren’t.

This article was originally published on June 1, 2017