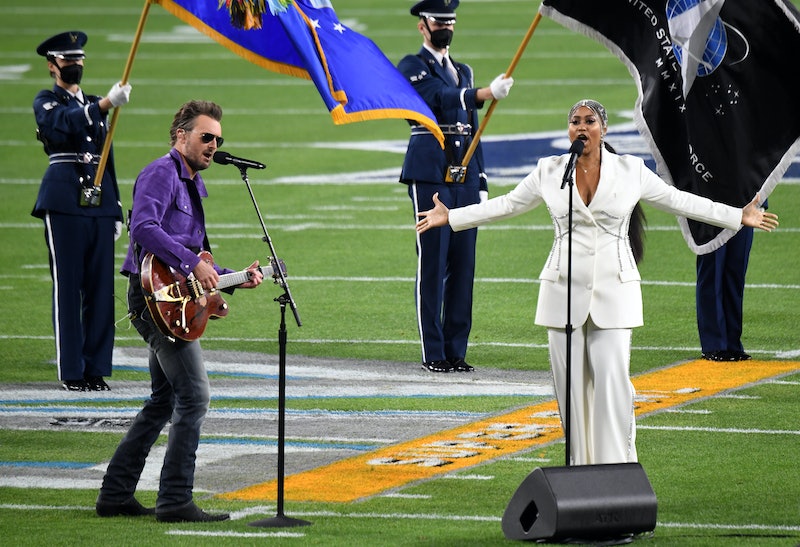 In a purple suede jacket and his signature aviator sunglasses, Church opened the performance with a bluesy, electric guitar-licked first verse. Then Sullivan took the mic, donning a white pantsuit and shimmering headpiece as she sang through the next few lines in her silky, powerful belt. Footage of players on the sidelines and U.S. Army soldiers viewing live from Kuwait showed onscreen as the two performers harmonized through the rest of the anthem. The duo concluded the song with stunning vocal runs as planes and fireworks filled the sky above Tampa, Florida's Raymond James Stadium.

Both Church and Sullivan's first appearances at the Super Bowl, the performance also marks the first time the anthem has been sung as a duet since Aaron Neville and Aretha Franklin took it on at Super Bowl XL in 2006. Fans expressed their love for this year's rendition on social media, with many of them praising Sullivan's powerhouse vocal chops — and some even wishing she sang the anthem solo. "Jazmine Sullivan & Eric Church did a great rendition," wrote one Twitter user. "Jazmine is just such a magnificent powerhouse that I wish she could’ve had the moment all to herself. But, it’s all good."

Actress Jackée Harry pointed out on Twitter that during a rehearsal for the performance held earlier in the day, Sullivan wore a sweatsuit reminiscent of the one Whitney Houston wore during her iconic national anthem performance in 1991.

Below, more social media reactions to Church and Sullivan's performance.

More like this
What Is Mary J. Blige’s Net Worth? The 9-Time Grammy Winner Is Doing “Just Fine”
By Hugh McIntyre
All The Ways You Can Watch The Super Bowl In The UK
By Asyia Iftikhar and Darshita Goyal
The 2023 Super Bowl Commercials Feature A 'Breaking Bad' Reunion & Missy Elliott
By Alyssa Lapid
Everything To Know About Rihanna’s Staggering Net Worth
By Hugh McIntyre
Get Even More From Bustle — Sign Up For The Newsletter
From hair trends to relationship advice, our daily newsletter has everything you need to sound like a person who’s on TikTok, even if you aren’t.