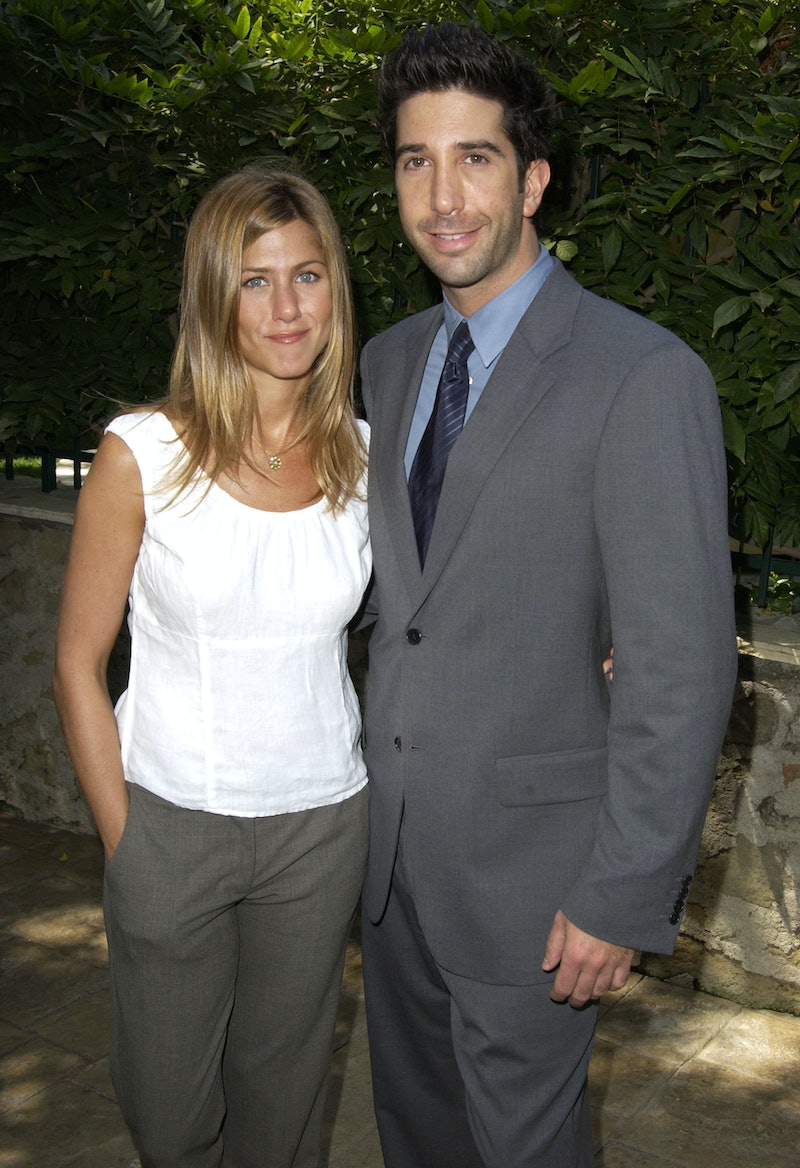 Everyone knows that Ross and Rachel were each other’s lobster in Friends, but it turns out Jennifer Aniston and David Schwimmer didn’t have to fake their onscreen chemistry. After HBO Max’s Friends: The Reunion host James Corden suggested it was “inconceivable” there weren’t offscreen romances among the Friends cast, Aniston coyly deferred to her costar Schwimmer, who admitted he “had a major crush on” her in the first season. Aniston’s response? “It was reciprocated.”

Lucky for fans, the actor, who played Ross Geller from 1994 to 2004, elaborated: “At some point, we were both crushing hard on each other, but it was like two ships passing because one of us was always in a relationship. And we never crossed that boundary. We respected that, and we both...” That’s when cast mate Matt LeBlanc interjected, “Bullsh*t,” while taking a sip from his mug. He did, however, quickly clarify that he was kidding.

Aniston, for her part, recalled thinking it would be “such a bummer” if the first time she and Schwimmer kissed was on national television. “Sure enough, the first time we kissed was in that coffee shop,” she said, referencing the Season 2 scene at Central Perk where Ross and Rachel have their first kiss. “So we just channeled all of our adoration and love for each other into Ross and Rachel.”

Meanwhile, Schwimmer — who also remembered him and Aniston cuddling on a couch between takes during “the very first year or two” of filming — couldn’t believe everyone didn’t know they were “crushing on each other.” The pair wasn’t fooling anyone however, as Matthew Perry and Courteney Cox both chimed in they “knew for sure.” Cox also admitted that she recently wept while watching their first kiss scene. “The tension, it was just palpable, it was just perfect,” Cox said, adding she was “so glad” they never got together, however, because if they didn’t work out, their scenes together wouldn’t have had the same impact.

Although Aniston and Schwimmer have openly expressed their admiration over the years, they dropped hints of a romance in a recent interview with People prior to the HBO Max reunion’s May 27 premiere. The cast named the pair as the biggest flirts, begging the question about a real-life crush. “Anyway, next question,” Schwimmer, responded. After Cox answered, “In the beginning,” Aniston similarly followed up, “Next question.”

Of course, it wasn’t the first time the Friends cast has been asked about offscreen hookups. During a 2016 James Burrows tribute, host Andy Cohen asked whether they’d signed contracts that they “wouldn’t sleep with each other,” for example. “David, say something!” Lisa Kudrow implored her costar, as Schwimmer stumbled over his response. “Well, that was broken!” he joked.

The shocking ‘90s crush wasn’t the only thing the Friends cast got off their chests during their reunion. One thing they could all finally unanimously agree on: Ross and Rachel were on a break.

More like this
A New 'And Just Like That' Table Read Pic Confirms A Key Character's Return
By Jack Irvin and Grace Wehniainen
24 Years Ago, 'Friends' Dropped Its Most Underrated Ross & Rachel Episode
By Grace Wehniainen
Netflix Reveals First Look At Wednesday In The 'Addams Family' Spinoff Series
By Bustle Editors
The 'Reasonable Doubt' Cast Includes A 'Save The Last Dance' Reunion
By Grace Wehniainen
Get Even More From Bustle — Sign Up For The Newsletter