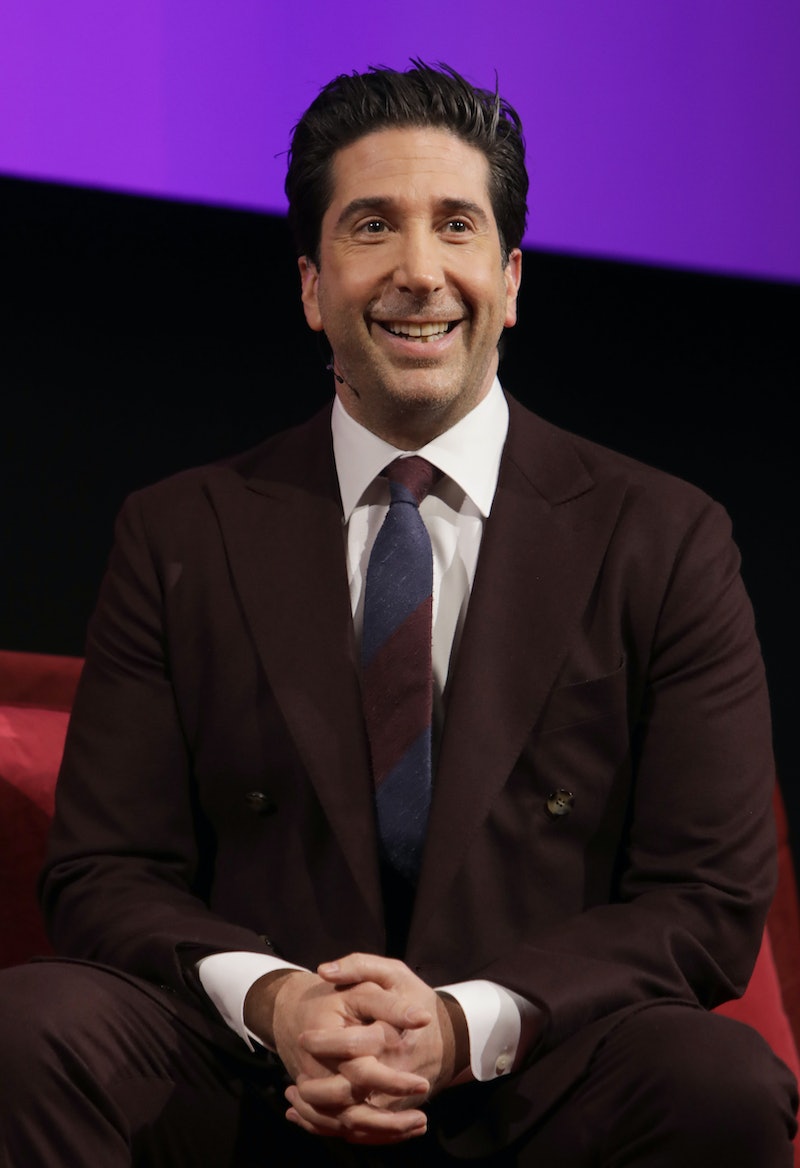 Since Friends ended in 2004, fans waited 17 years for the cast to get back together. On May 27, HBO Max is finally releasing the highly-anticipated Friends: The Reunion special alongside the show’s 10 seasons already available on the platform. Over the course of a decade, Friends fans followed the lives (and loves) of the six-member cast, but perhaps the character with the most exciting dating history is Ross Geller (David Schwimmer). Viewers watched the geeky paleontologist flit from relationship to relationship — even marriage to marriage. His divorces (all three of them) were often punchlines in the show. That interim “break” he had with his on-again, off-again love interest Rachel (Jennifer Aniston) became a divisive moment in Friends history. To this day, viewers maintain strong Team Ross or Team Rachel sentiments.

But Schwimmer, who plays the show’s serial monogamist, couldn’t be any more different (sorry, had to) from Ross in his approach to dating and marriage. The Intelligence star was 43 when he married Zoë Buckman in 2010. The couple’s relationship blossomed after a meet-cute three years prior: The two met in a London bar, and Buckman was working as a server when the star was in the city filming his directorial movie debut Run, Fatboy, Run. A year after the wedding, the couple became first-time parents when daughter Cleo was born.

Sad news came years later in 2017 when the couple released a joint statement through Us Weekly announcing their amicable split. They told the outlet, “Our priority is, of course, our daughter’s happiness and well-being during this challenging time and so we ask for your support and respect for our privacy as we continue to raise her together and navigate this new chapter for our family.”

When Schwimmer opened up to The Telegraph last year about his “heartbreaking” divorce, he told the outlet, “I waited a long time to decide to marry. But I took it just as seriously. I would say even more so.” Echoing the sentiments in the couple’s separation announcement, the People v. O.J. Simpson actor maintained that his daughter takes priority. “In the first 40 years of my life, work came first, and after she came into this world, I was like: ‘Well, that’s out the window.’ Now it’s a different game. She comes first, no matter what,” he told the outlet.

Prior to dating Buckman, he dated “Torn” singer Natalie Imbruglia in the ’90s and was linked to British pop group S Club 7’s Tina Barrett. Last year, former Real Housewives Of Beverly Hills star Brandi Glanville claimed she dated both Schwimmer and his Friends co-star Matt LeBlanc, but Schwimmer’s rep denied Glanville’s claims. He was most recently rumored to be dating Katie Markowitz, but she denied the speculation to Us Weekly.

Schwimmer has mostly been private about his love life. The success of the ’90s sitcom cemented each cast member’s star status, but celebrity affected Schwimmer differently. In an interview with The Hollywood Reporter, the Friends alum talked about wanting “to hide and not be seen.” He added, “It was pretty jarring, and it messed with my relationship to other people in a way that took years, I think, for me to adjust to and become comfortable with.” These days, the star seems to be single and focused on his daughter, who turned 10 two weeks ago.

More like this
'Friends' Star Maggie Wheeler Offers Support To Matthew Perry After Reading His Memoir
By Alyssa Lapid
The Banned 'Friends' Ad Shows Monica As You’ve Never Seen Her Before
By Sam Ramsden
Ashton Kutcher Wants Danny Masterson “To Be Found Innocent” In Rape Retrial
By Jake Viswanath
At 28, Debra Jo Rupp Was Living A Much Different '70s Show
By Grace Wehniainen
Get Even More From Bustle — Sign Up For The Newsletter
From hair trends to relationship advice, our daily newsletter has everything you need to sound like a person who’s on TikTok, even if you aren’t.