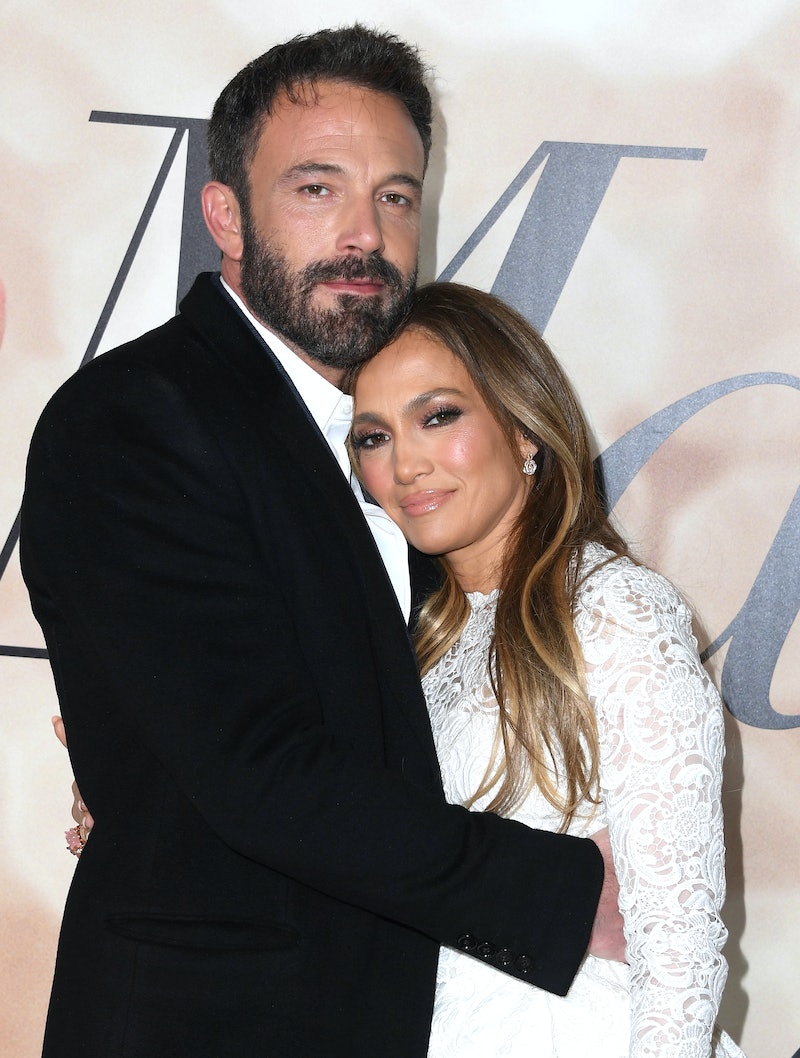 Marry Me was apparently more than just a movie title: Jennifer Lopez and Ben Affleck are engaged for the second time, the singer announced in her “On the JLo” fan newsletter late Friday, April 8. After teasing a “major announcement” on social media earlier the same night, Lopez sent subscribers a video of her admiring her “perfect” engagement ring, which includes a green stone, set on a silver band, while visibly overcome with emotion. She also added a telling diamond ring emoji to her Twitter display name.

In case her video wasn’t clear enough, the “Love Don’t Cost a Thing” singer’s rep confirmed the engagement to People, after she’d been photographed wearing a ring on that finger, days earlier. Her sister Lynda Lopez also shared the happy update on social media afterward. “So this happened...” Lynda captioned an April 8 Instagram story, adding several green heart emojis and tagging her sister in screenshots from the subscriber video.

Though the couple has yet to share more details on the proposal, Lopez previously explained in another newsletter that the color green has a special meaning to her, per People. “I always say the color green is my lucky color,” she once wrote, referencing “a certain green dress” she wore to the 2000 Grammys. “I’ve realized there are many moments in my life where amazing things happened when I was wearing green.”

The uniquely hued ring could “dwarf the value of their previous engagement ring,” Diamond Pro CEO Mike Fried told Page Six. He explained that its color and size would make it “incredibly rare” and suggested it could be worth well over $5 million, maybe even more than $10 million. Affleck previously gave her a pink Harry Winston diamond ring that reportedly cost him $1.2 million.

The newly re-engaged couple’s announcement comes about a year after they rekindled their early 2000s romance last spring. Affleck and Lopez first started dating in July 2002, and the Oscar winner proposed several months later that November. However, they postponed their planned September 2003 wedding before officially ending their engagement in January 2004. In the years following, the musician welcomed twins Max and Emme, now 14, with ex-husband Marc Anthony, while Affleck had three children with ex-wife Jennifer Garner: Violet, 16, Seraphina, 13, and Samuel, 10. This will be Affleck’s second marriage, and Lopez’s fourth after six engagements, including her most recent one to Alex Rodriguez, which ended last April.

The past two decades of separation have only made Lopez especially cherish her second chance at love with Affleck all the more. “It’s beautiful the way it feels very different than it was years ago. ... There’s more of an appreciation and a celebration for it, which is nice,” she explained to People in February. “When you find somebody and you really, really love them and you get a second chance at that? That is a really rare, precious, beautiful thing and we don’t take it for granted.”

The Hustlers star echoed that sentiment, also referring to “having a second chance at real love” in her March Rolling Stone cover story. “We’ve both grown. We’re the same, and we’re different. And that’s what’s nice,” she said, later adding, “we learned a lot. We know what’s real, what’s not real. So it’s just — the game has changed.”

More like this
J.Lo Calls Ben Affleck “The Most Consistent & Selfless” Dad On Father's Day
By Jake Viswanath
Kimberly J. Brown & Daniel Kountz Looked Back On Their ‘Halloweentown’ Romance
By Stephanie Topacio Long
Chrishell Stause & G Flip Have “No Rules Or Regulations” In Their Relationship
By Brad Witter
Selena Gomez Is Fine Being Single, But She Still Manifested Romance On 'SNL'
By Martha Sorren, Jake Viswanath and Jack Irvin
Get Even More From Bustle — Sign Up For The Newsletter