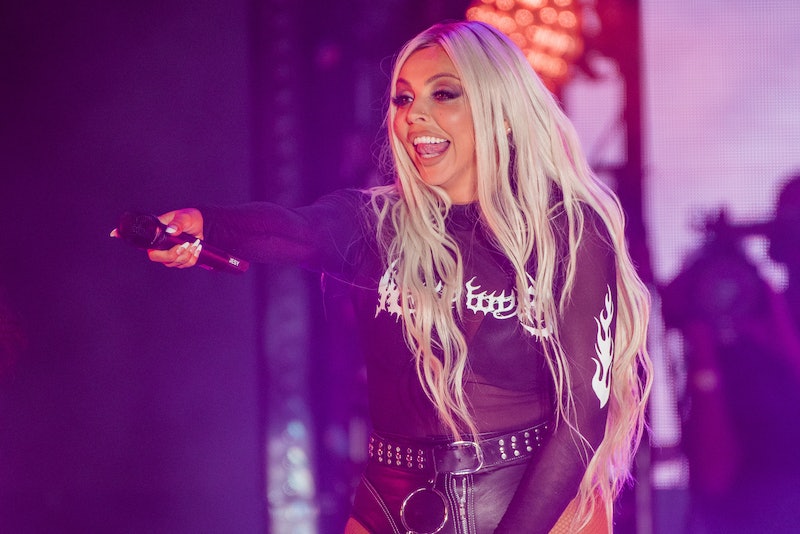 Over the weekend (June 13) Jesy Nelson’s celebrated her thirtieth birthday with a jam-packed schedule of partying with friends. The former Little Mix star appeared to be in great spirits as she flooded the timeline with a series of fun “flirty thirty” Instagram posts.

Nelson marked the start of her thirties at Neverland bar in London, per Metro, surrounded by a few close friends, including celebrity brow stylist Sal King and model Felicity Hayward. On the menu? Cocktails and dancing.

Dressed in a Gucci bikini top, matching bandana, and cargo pants, Jesy clearly couldn’t resist singing along to some hit tunes. In a fun Instagram story shared by Jesy’s bestie, Charlotte Driver, the birthday girl could be seen twerking to Stevie Wonder’s Happy Birthday as her friends cheered her on.

In a sweet post, Nelson posted a gallery of everyone who attended her celebrations, including in a mirror selfie with two of her friends. In the caption shared how she was feeling optimistic about starting a new decade in her life.

“Couldn’t of asked for a better way to spend my 30th,” the singer wrote. “All of my favourite people in one place. Feeling very lucky and I cannot wait to start this new decade of my life 🥳

Clearly, making the most of her birthday, the singer also posted a photo of herself holding a birthday balloon along with the caption: “You’re about to be inundated with birthday pics soz🤷🏻‍♀️ enjoy 300000000000000000”.

Felicity Hayward, who interviewed Jesy Nelson about the “breaking point” that led her to leave Little Mix , also devoted an Instagram post to the star. “Do more things that bring you joy,” wrote Hayward in the caption, “and surround yourself with people with good energy ✨Welcome to the thirties club my babes @jesynelson love you lots.”

Nelson’s birthday celebrations come after a mammoth few months for the entertainer. Following her shock split from Little Mix back in 2020, Nelson has been teasing to a solo career and signs say new music is on the horizon.