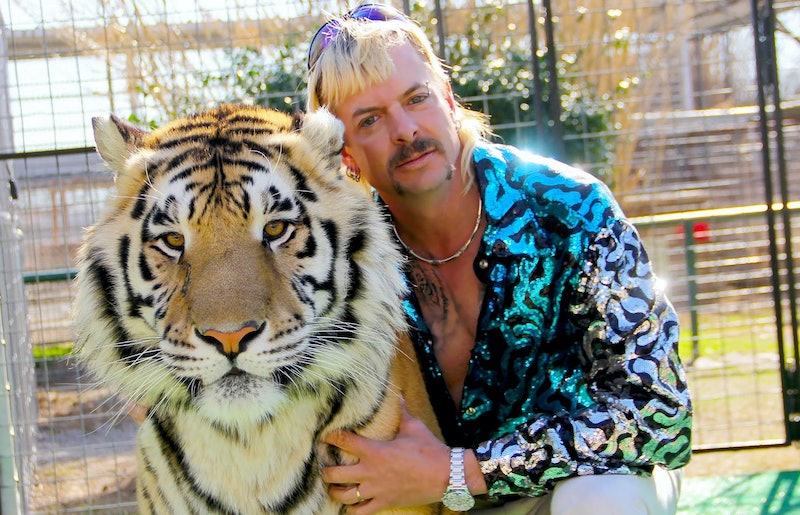 Since the success of Tiger King launched him to international fame, Joe Maldonado-Passage (better known as Joe Exotic) and his supporters have been campaigning for Donald Trump to offer him a presidential pardon. Apparently, they were confident that the former president would be sympathetic to the request because the former zoo owner's team rented a limo so that he could leave prison on Jan. 20 in style.

"We’re confident enough we already have a limousine parked about half a mile from the prison. We are really in action mode right now," Eric Love, who spearheaded Maldonado-Passage's pardon campaign, told Metro UK on Wednesday. He added that a hair and makeup team was also brought to the Fort Worth Federal Medical Center, where Maldonado-Passage is currently being held, so he could record a statement thanking Trump for the pardon. "As soon as we get the word, we're going to execute that video to the White House and thank them," Love said.

However, the Tiger King star was not included on the list of over 100 people who received pardons or commutations from Trump in the final hours of his presidency. "It is the President’s Constitutional right to Pardon and we have to accept and respect his use of discretion. Our mission is just and continues," the reality star's lawyer, Francisco Hernandez, wrote on Facebook after the pardons were announced. Social media users, however, were less accepting of the news and found humor in how overconfident his team was that he would be released.

Maldonado-Passage was less gracious about the situation than his lawyer and released a statement on Wednesday afternoon slamming the former president for not pardoning him. "I was too innocent and too GAY to deserve a Pardon from Trump," the zoo owner wrote on Twitter. He also attacked Trump's son, Donald Trump Jr., who spoke out in support of Maldonado-Passage back in April: "I only mattered to Don Jr. when he needed to make a comment about me to boost his social media post. Boy were we all stupid to believe he actually stood for Equal Justice? His corrupt friends all come first."

Maldonado-Passage is currently serving a 22-year prison sentence following a conviction that included two counts of murder-for-hire and 17 other counts of animal abuse and the illegal sale of endangered animals. Tiger King chronicled his long-running feud with animal rights activist and Big Cat Rescue founder Carole Baskin, which culminated with Maldonado-Passage hiring someone to kill her.

Since his 2019 conviction, Maldonado-Passage has contested the charges, and in March 2020, he filed a lawsuit asking for $94 million in damages from the U.S. Fish and Wildlife Service and a presidential pardon from Donald Trump. He also filed a legal appeal alleging that his arrest was part of a larger "entrapment scheme" concocted by Baskin to "further and (sic) animal rights agenda." In early April, two U.S. judges dismissed his appeal, with U.S. Magistrate Judge Suzanne Mitchell describing it as "frivolous" and poorly formed.

Despite the setbacks, Maldonado-Passage and his legal team were determined to pursue a presidential pardon, and in April 2020, Trump said he would "look into" the case. Following the release of Tiger King, he also saw a swell of online support with the #FreeJoeExotic campaign, and Cardi B even jokingly offered to start a GoFundMe to pay for Maldonado-Passage's legal fees. However, that campaign hit a snag when a clip of the zoo owner lamenting that white people can't say the N-word went viral, which inspired Cardi B among others to withdraw their support.

While Maldonado-Passage and his legal team will likely continue to pursue their legal options going forward, the zoo owner will be released in 2042 if he serves his full sentence.