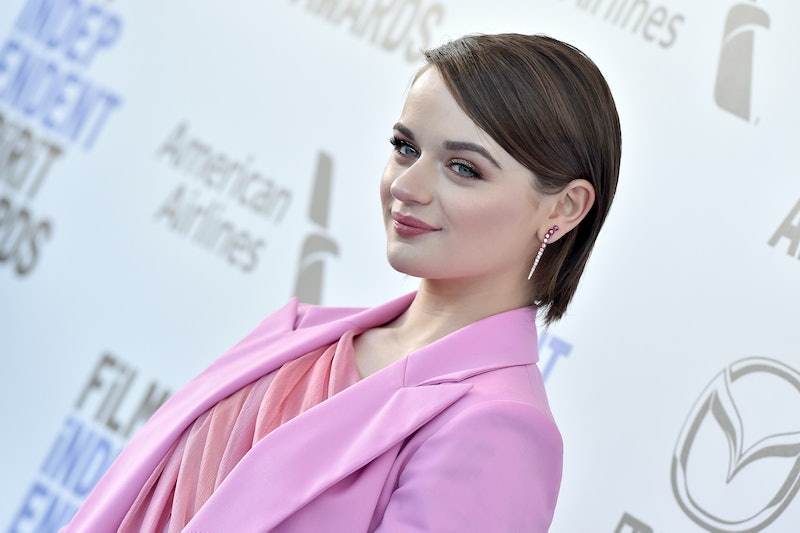 It's every fan's dream: a real life romance stemming from a favorite fictional one. So when The Kissing Booth co-stars Jacob Elordi and Joey King started dating IRL, the internet went wild. Unfortunately, life is not the movies, and King and Elordi split after two years. With The Kissing Booth 2 out now, fans will be wondering, is Joey King dating anyone in 2020? After one relationship in the public eye, King isn't eager to to talk about any new romances.

In September 2019, King was spotted on a triple date at an outdoor screening of Harry Potter and the Chamber of Secrets in Hollywood Forever Cemetery. King's two sisters, Hunter and Kelli, were there with their significant others, while King sat alongside producer Steven Piet. King also shared a photo of the night on Instagram — but just with her sisters.

Joey King and her sisters at Hollywood Forever Cemetery

Piet and King met on the set of The Act, a Hulu true crime series based on the real-life tale of Gypsy Rose and Dee Dee Blanchard. King nabbed an Emmy nomination for her portrayal of the Munchausen syndrome by proxy victim Gypsy Rose. Piet co-produced the series and directed two episodes, with King calling Episode 5 that he helmed "one of my absolute favorites" on her Instagram.

Just a few weeks after the cemetery date, King and Piet attended the 2019 Emmys together in September. Neither Piet nor King have said an official word about their relationship, and the two have kept a low profile since then. Which is unsurprising, given King's new stance on dating in the public eye.

"When you're going through something and the world wants to go through it with you or [wants] to get every piece of detail from you about it, it's really difficult. Some of these things are just meant for you," she told Refinery29. “All I can do is try and make the world a better place if I can. I may be in a position where I have a lot of eyes on me, but I'm still just a young gal living her life."

While it's unclear if Piet and King are still seeing each other, one thing is certain: King will keep her next relationship just for her.

More like this
Here’s Everything Coming To & Leaving Netflix In February
By Jake Viswanath
Selena Gomez Confirms She's Single Amid Drew Taggart Dating Rumors
By Martha Sorren, Jake Viswanath and Jack Irvin
Who Is Pete Davidson Dating? He & Chase Sui Wonders Got Caught Kissing
By Jake Viswanath
Love Is Blind’s Natalie Claims Shayne Signed Up For 'Perfect Match' While They Were “Still Together”
By Brad Witter
Get Even More From Bustle — Sign Up For The Newsletter
From hair trends to relationship advice, our daily newsletter has everything you need to sound like a person who’s on TikTok, even if you aren’t.