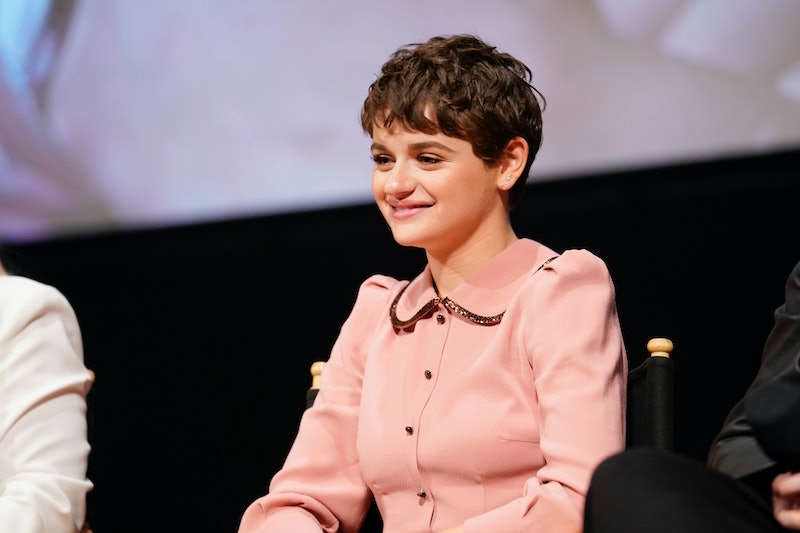 Joey King has been a star on the rise since she booked her first starring role in Ramona and Beezus in 2010, and her recent Emmy nominated work in Hulu's The Act has put her on top of the list of actors to watch. And with that success comes scrutiny, which means a lot of people will be asking who Joey King is dating in 2019.

In 2018, King was actually in a pretty public relationship with her co-star Jacob Elordi. The two met on the set of their Netflix hit, The Kissing Booth, which starred King as Elle, a teenage girl who accidentally falls in love with her best friend's older brother, Noah, played by Elordi. The co-stars dated for about two years before reportedly going their separate ways around April of 2019. Throughout their relationship, King and Elordi both shared photos of each other on social media (though many of the posts have since been deleted), but since their breakup, King has been keeping her personal life to herself. However, there are some reports that she is seeing someone new.

King was reportedly seen with Steven Piet at a Harry Potter and The Chamber of Secrets screening at the Hollywood Forever Cemetery in early September, per Seventeen. She was also there with her two sisters, Hunter and Kelli, and their respective dates. E! News reported that Piet and King were "cuddling," and sources claimed they were affectionate towards another as well. Piet was an executive producer on The Act and also directed two episodes, according to IMDb, but it's unclear if that's where they met.

Though Piet and King have not commented on any reports of a romance, it's possible they'll be spotted together at the 2019 Emmys. After all, The Act earned two nomination — Outstanding Lead Actress in a Limited Series for King, and Outstanding Supporting Actress in a Limited Series for Patricia Arquette. That said, King might be more hesitant to take another relationship public.

King revealed in an interview that one thing she learned from her relationship and breakup with Elordi was that some things were meant to be kept private. Speaking candidly about what it was like to go through a breakup in the public eye, the actor told Refinery29 in July, "Because when you're going through something and the world wants to go through it with you or [wants] to get every piece of detail from you about it, it's really difficult," she said. "Some of these things are just meant for you."

She might be keeping her private life to herself, but King is always ready to talk about her work. In that same Refinery29 interview, she teased the upcoming Kissing Booth sequel, noting that she was excited to see what happened to Elle (her character) and her onscreen best friend Lee. "I think it's going to play a lot into Lee and Elle’s friendship, but there's plenty of relationship drama to be had on the next one, so don't worry, we will definitely get into that,” she said, while also teasing trouble in Elle's relationship with Noah.

So, don't expect King to talk much about her romantic life on the red carpet, unless it's fictional.

More like this
Michael B. Jordan Tackled His "Public Breakup" With Lori Harvey On 'SNL'
By Brad Witter
Who Is Pete Davidson Dating? He & Chase Sui Wonders Got Caught Kissing
By Jake Viswanath
Joey Essex Is Rumoured To Be Dating A 'Love Island' Favourite
By Sam Ramsden
Daryl McCormack Has A Very Special Lady In His Life
By El Hunt
Get Even More From Bustle — Sign Up For The Newsletter
From hair trends to relationship advice, our daily newsletter has everything you need to sound like a person who’s on TikTok, even if you aren’t.