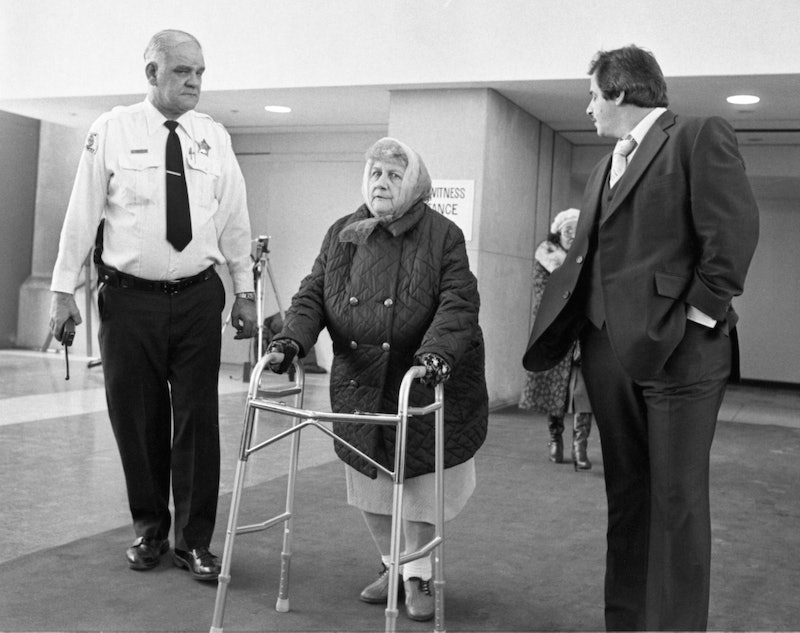 Conversations With a Killer just dropped another season on Netflix, this time focusing on serial killer John Wayne Gacy, the Illinois businessman and part-time party clown. As has been widely reported, Gacy assaulted and murdered over 30 young men and underaged boys. Many of the victims’ bodies were later recovered in Gacy’s home, either buried in a crawl space or placed in-between the property’s walls.

During Gacy’s trial, it was revealed that his traumatic childhood may have factored into his later criminal behavior — specifically the abuse he faced from his father, John Stanley Gacy. Dr. Richard Rappaport, a forensic psychiatrist who worked on Gacy’s trial, argued that Gacy’s “insanity” was the result of his father’s actions. “He had brief psychotic episodes. That’s the state he was in when he was doing the murders. He went into episodes of insanity when it was with a situation that depicted the relationship he had with his father, and he was sane enough in between these episodes to cover his behavior up,” says Dr. Rappaport in Conversations With a Killer.

Below, what to know about Gacy’s parents, John and Marion, and how their treatment of Gacy may have affected his behavior.

John Stanley Gacy was a World War I veteran and auto mechanic. His wife, Marion Elaine Robinson, gave birth to their son on March 17, 1942 in Chicago, Illinois. During Gacy’s upbringing, John Sr. was physically and verbally abusive, and often compared his son unfavorably to his sisters, calling him a “sissy” and other queer-coded pejoratives, per Tim Cahill’s 1986 book Buried Dreams: Inside the Mind of a Serial Killer. When Gacy was molested by a family friend in 1949, he didn’t tell his father, in fear that he’d be blamed himself, according to a 1992 Time-Life publication.

Dr. Rappaport argued that Gacy recreated traumatic moments from his childhood through his murders. “His father essentially victimized him in the basement of his own home as he was growing up. Gacy tried to reproduce that behavior with his victims. And so all these dead bodies he put in the basement was like himself being buried by his father,” he said.

But despite the abuse, Gacy still respected his father. In a 1994 interview with The New Yorker, Gacy defended John Sr., saying he “never hated [his] father” and called him “a strong man.” However, he confirmed that the two weren’t close. “I thought I could never please him, but I still love him,” Gacy said. Later, he added: “The media made an image out of him like he was an alcoholic monster. O.K., [sic] my dad drank, and he was Jekyll and Hyde when he drank. If he came up from the basement and said the walls were pink, you said the walls were pink, but you learned to stay away from him and keep your mouth shut at the dinner table.”

On Christmas Day 1969, John Sr. passed away while Gacy was incarcerated on sodomy charges. According to the docuseries, Gacy wasn’t informed about his father’s death until after he was buried. “My way to remember my dad is not to be like him,” he also told The New Yorker. “That’s my way of getting back at the son of a b*tch.”

Gacy Had A Close (But Imperfect) Relationship With His Mother

Conversations With a Killer also recounts Gacy’s close relationship with his mother, Marion. Following his parole in June 1970, Gacy moved in with his mother as he readjusted to society. Per The New Yorker, Marion helped her son come up with the acronym for his part-time construction business, P.D.M. Contractors (for Painting, Decorating, and Maintenance).

However, there were also conflicts at times. The series recounts how he’d try on his mother’s underwear; when she caught him, he was reprimanded. “She made me wear [the underwear], and she punished me with it,” Gacy says in his confession tapes. “She said if I ever get caught with it again, she’d make me go down the street with it on.”

In the fourth week of Gacy’s trial, his mother testified that her son was repeatedly beaten and abused by John Sr. in his childhood. “Mother was a good witness,” Gacy says in the tapes. Marion died in 1989, less than five years before Gacy’s execution.