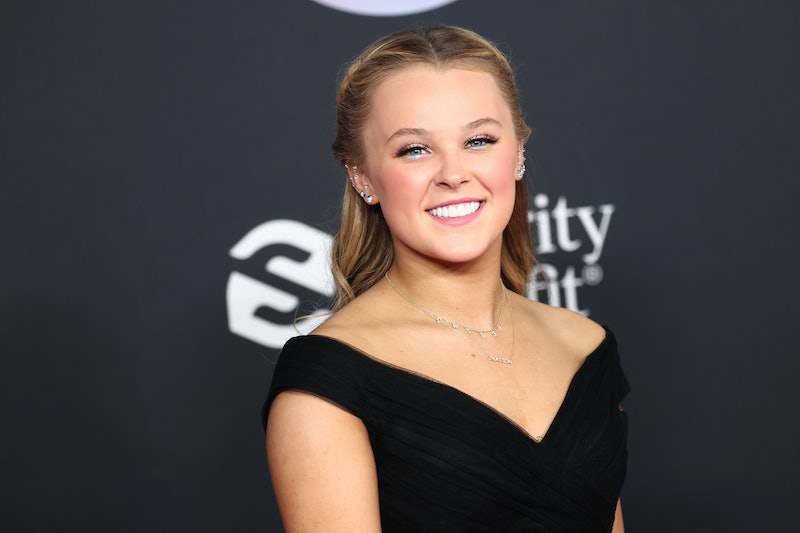 JoJo Siwa wasn’t nominated at this year’s American Music Awards, but the Dancing With the Stars contestant still had a very big night. In addition to presenting the award for favorite pop duo and scoring an invitation to Cardi B’s house for Christmas, Siwa revealed that the event marked her first time wearing a dress and heels. Ever.

“I’m in a dress and heels for the first time in my life!” the 18-year-old dancer, singer, and YouTube star told Us Weekly. “When I knew I was coming to the AMAs, I was like, ‘uh oh, what am I going to wear?’ I had this transition while being on Dancing With the Stars, where I’ve gone from dressing like I normally dress to kind of looking more adult. And I was like, I want to branch out of my comfort zone. Today, we went for a dress.”

The black, off-the-shoulder gown featured a sheer tulle skirt with ruffles, and Siwa reportedly borrowed a pair of heels from her DWTS partner, Jenna Johnson. The “High Top Shoes” singer also debuted a fresh manicure, which she got specifically for the Nov. 22 finale. “I used to hate getting my nails done, literally never would do it,” she admitted. “And then when Dancing With the Stars came around, I started to get them done. And, these nails are actually for our performance that we’re doing in the finale tomorrow. These are special.”

Siwa and Johnson made history as the first-ever same-sex dance partners on DWTS, and they can do so again if they win the mirror ball trophy. Throughout their time on the show, the duo has provided much-needed LGBTQ+ representation, but being on it also came with its challenges. For example, Siwa was never professionally trained in ballroom dancing and she also reportedly experienced a breakup in the middle of the season.

“This is a whole new ball game for me,” Siwa confessed on the Season 30 premiere before earning the highest score of the night. “I’ve never done anything ballroom before. It’s a learning experience that I’m more than ready for.” The dance partners went on to stun viewers with an Argentine tango to Britney Spears’ “...Baby One More Time,” a Viennese waltz dressed as Prince Charming and Cinderella, a fox trot dressed as Sandy and Frenchy from Grease, and so much more.

On Oct. 20, however, the news broke that Siwa and her girlfriend Kylie Prew had split. “JoJo and Kylie did break up,” a source confirmed to Us. “Kylie stopped attending the show so she hasn’t been seen in the audience since they split. JoJo is focusing on the competition and giving her all. While it’s a rough time for her, she’s handling DWTS very professionally and still putting on a smile and giving 100 percent. She doesn’t want to let down her fans.”

More like this
'Bachelorette' Vet Clare Crawley Unveiled 2 Special Wedding Day Accessories
By Stephanie Topacio Long
Jennifer Coolidge Recites “Jenny From The Block” Beside J.Lo In Her First TikTok
By Jake Viswanath
Zach Reveals The Chaotic 30 Minutes That Were Cut From ‘The Bachelor’ Premiere
By Grace Wehniainen
Kylie Jenner Clarified How To Pronounce Her Son's New Name
By Jake Viswanath
Get Even More From Bustle — Sign Up For The Newsletter
From hair trends to relationship advice, our daily newsletter has everything you need to sound like a person who’s on TikTok, even if you aren’t.