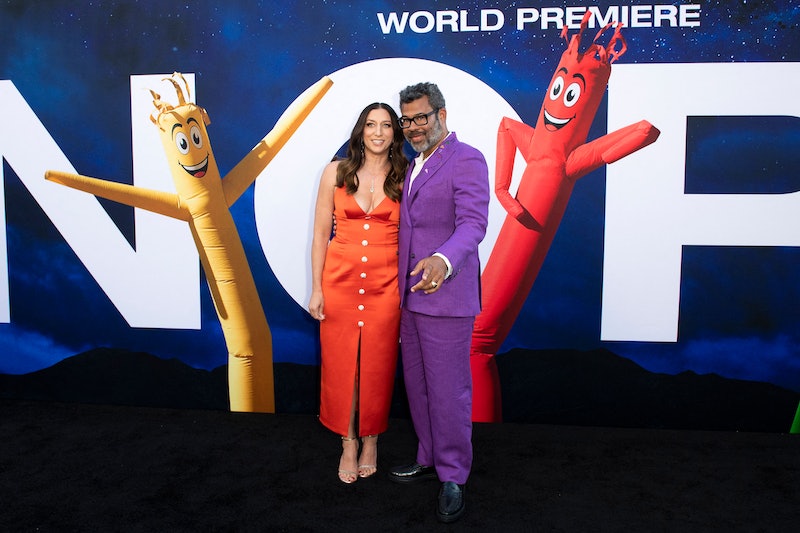 In just a few years, Chelsea Peretti and Jordan Peele have gone from names to watch in the entertainment world to two of the hottest and most sought-after stars in the business. Peretti got her start writing for various programs and first popped up on the Kroll Show, but she became a household name after scoring a role on the critically acclaimed ratings success Brooklyn Nine-Nine. She’s also lent her vocal talents to titles like Big Mouth and Harvey Girls Forever.

Her husband’s TV resume includes MADtv, Childrens Hospital, The Last O.G., Weird City, Lovecraft Country, Hunters, The Twilight Zone, Big Mouth, Bob’s Burgers, and of course, Key & Peele, his breakout sketch comedy series with collaborator Keegan-Michael Key. Since the end of the show, Peele has jumped into the film world, most recently with his sci-fi thriller Nope, which reunites him with Oscar-winning Get Out star Daniel Kaluuya. He is now a four-time Academy Award nominee for Get Out and BlacKkKlansman, winning Best Original Screenplay for Get Out.

Their personal lives aren’t quite as on display as their talents are. The two have kept fairly mum about their relationship, though they have shared good news in their personal lives from time to time along the way. For those who haven’t been following the pair since they first got together, here’s a timeline of their love, from first date to parenting.

One of Hollywood’s sweetest and most low-key romances began in 2013. According to Peretti, the two comedians “met on the Internet, on Twitter.” Apparently, Peele was “very complimentary of the web series I once did,” which seems like a fantastic way to begin a conversation with someone. In an interview with Entertainment Weekly, Peretti went on to say that the actors were planning to go to Sizzler for the first date, though it’s not clear if they did end up at the chain restaurant or opted to go somewhere a little more intimate.

For a while, a rumor circulated that Andy Samberg, who worked with Peretti on the successful sitcom Brooklyn Nine-Nine, set Peretti and Peele up, but according to her, that’s not how it worked out (though it does make for a good story).

Not much is known about Peretti and Peele’s dating life, and they moved on from being simply boyfriend and girlfriend to much more in a relatively short span of time.

2015: They Tweeted Their Engagement

After two years of dating (if that), Peele and Peretti became engaged, but as is their usual course of action, they kept things private until they decided to share the news with the world, and even then, the announcement wasn’t very grand.

On Nov. 27, 2015, the two coordinated their tweets to reveal their engagement. Peretti started her post by giggling at the new term they had just started to use, saying “My fiancé (lololol),” and then continuing the simple and fun statement by making sure there was no question about what had taken place: “@JordanPeele proposed to me last night during the family talent show lolol.”

Peele kept things even shorter and sweeter, writing nothing by his fiancée’s handle and then posting a diamond ring emoji. Simple, but effective. He may be an Oscar-winning screenwriter, but the Get Out powerhouse understands that sometimes less is more.

Before tying the knot, Peele and Peretti collaborated on their first project together: commercials for Booking.com. In the ad campaign, the couple explored destinations for their dream wedding (with their dog in tow), including a majestic jungle yurt and a tropical resort, complete with a white horse on the beach. Needless to say, something goes hilariously wrong with both options.

Less than half a year after they revealed they were engaged, Peretti and Peele were married, though it’s possible nobody would have known until they opted to make it public on social media. Apparently, the two chose to elope, and their wedding was small. Like, tiny.

During an appearance on Conan in 2018, Peretti detailed their nuptials, explaining that it was just them, their dog, and a woman named Soaring who married them. Apparently, the pair eloped in Big Sur, and not even their families were present — other than their furry friend, that is. Peretti made the exciting announcement on Instagram in mid-2016, stating simply that they had, “eloped a bit ago our only witness was this lil guy️,” with a picture of their pooch, a bouquet, and the ring.

Just in case there were any questions, Peele himself let the world know exactly what was going on when he and his comedy partner Keegan-Michael Key appeared on Late Night With Seth Meyers, stating simply, “I am married to actress Chelsea Peretti.” Of course, Key made a joke of the whole thing, quickly adding, “I am not married to actress Chelsea Peretti. We’re just dating.”

Some couples wait years after getting married before they decide to have children, but Peretti and Peele are not that kind of husband-and-wife duo. Less than 12 months after announcing they had tied the knot, the comedian shared a picture on her Instagram in February 2017 that showed off her growing baby bump. She captioned the post “beyonce schmonce,” as the reveal came just a short time after Queen Bey had taken to the same social platform to let the world know she was set to become a mother once again.

Throughout her pregnancy, Peretti didn’t shy away from sharing updates regarding how things were going, highlighting the good and the difficult. She posted frequently on her Instagram, detailing the glamorous and often uncomfortable journey to becoming a mother.

Not even six months later, the funny writers and actors became parents for the first time. Peretti and Peele revealed the birth of their son, Beaumont Gino Peele, to People, confirming that the child was brought into the world on July 1.

Peele and Peretti have proven to be each other’s biggest cheerleaders during their biggest successes. As his directorial debut Get Out was receiving major Oscar buzz, Peele credited his wife for getting him through the chaos of awards season (Moira Rose’s favorite time of year).

“There is a lot of time you’ve got to put into coming to events and talking to people who are interested in the film,” he told US Weekly in January 2018. “I just couldn’t have asked for a more supportive partner, really. When it gets tough, I get to come home and have the funniest person in the world in the room with me. I am forever blessed.”

In a span of four years, Peretti and Peele started talking, met, began dating, became engaged, got married, decided to become parents, and then did exactly that. That’s quite the trajectory, and the two seem to be happier than ever, as they regularly support one another at events, in interviews, and on social media, where they remain playful and candid about their hectic lives.

As Peele prepares to unleash his new film Nope, Peretti has been by his side, posing with her husband on the red carpet of the film’s Los Angeles premiere on July 18.

Just days prior, Peele returned the favor when Deadline reported that Peretti would be making her film directorial debut, retweeting his wife’s Twitter announcement with the article.

“AHHHHHHHHHHH i actually wept seeing this,” she wrote.

This article was originally published on Aug. 27, 2021