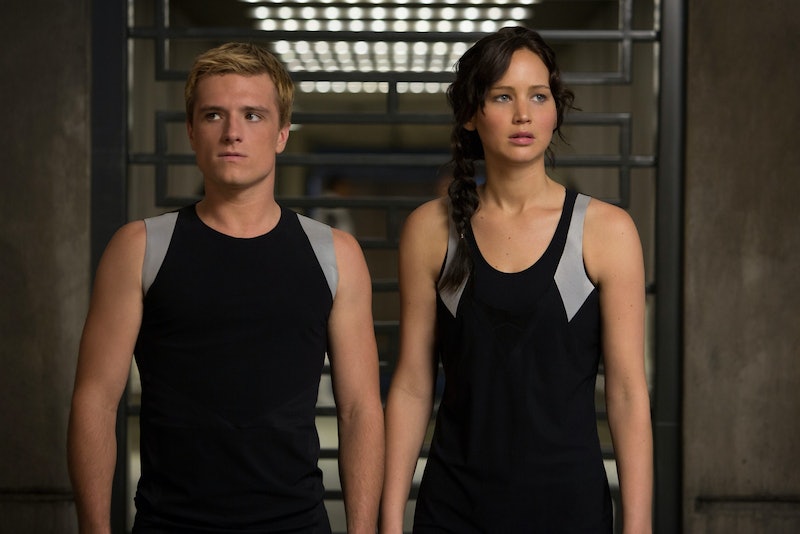 It's been five years since the final installment of the Hunger Games trilogy premiered, but one star thinks things haven't changed all that much for Katniss and Peeta. During a recent interview with Us Magazine, Josh Hutcherson revealed where he thinks the Hunger Games characters would be today, adding that he and his costars have actually shared their own theories in the past.

"It’s funny. ‘Cause we actually spitballed about [where the characters would end up] on set one day," Hutcherson said. "We were sort of talking about like … [after] the Hunger Games, Peeta and Katniss are older and they have a kid and then the movie ends," he explained, "but then what if we pick up the story and it’s like 10 years later and there's a new rebellion that has to happen or something like that ended up."

The actor added that while "I’d like to hope and think that they are living happily and that the world is equal and lovely," he doesn't have too much hope that any of the characters in the Hunger Games universe would get a happy ending. "But history is doomed to repeat itself. So I feel like there might be some more unrest that would come along."

Despite the potential for returning to the arena once more, Hutcherson did note that he would be down to reprise his role as Peeta for the film adaptation of The Ballad of Songbirds and Snakes. While it's unclear what kind of role the beloved baker would play in that prequel — which follows young President Snow as he becomes involved with the Hunger Games — the actor said he “happily would” return to the franchise. "[I] would love to play Peeta again," Hutcherson said, adding that he "had great chemistry from the get-go" with Jennifer Lawrence.

That great chemistry has led to an enduring friendship with Lawrence, Liam Hemsworth, and the rest of the cast, who Hutcherson said he still spends time with. "[We] keep in contact pretty closely," he said, though he noted that they didn't have a Hunger Games cast group chat. "Throughout the years, we always get together and see each other when we're in the same place." In fact, on September 8, he told Entertainment Tonight that he and Lawrence have had plenty of mini reunions over the past few months, while quarantining in different states.

"I saw Jen during quarantine — [we] got to have dinner together," he revealed. "It was like mid-summer maybe [and] we had a nice socially-distanced dinner together. [It] was good to catch up with her because she's been off living her life in other places all over the world. ... And, I saw Liam towards the end of last year, but this year he's been off in Australia. We catch up every time we can. I got to see Woody [Harrelson] not too long ago, so it's good," Hutcherson continued. "No matter how much time passes, once we see each other again, it's instantly right back to where it was."

That friendship has been an important part of the cast's relationships since filming began. "We’re just friends now," Hutcherson told Teen Vogue back in 2015, when asked about whether or not the cast would ever reunite. "We talked about doing a reunion with everyone, but we hang out all the time anyway. We’ve passed the cast zone and we’re just normal-life friends now."