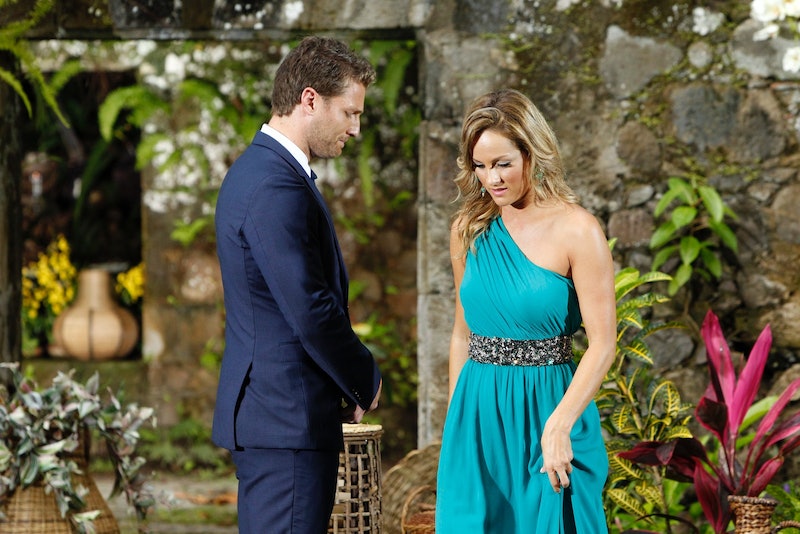 Juan Pablo may have broken up with Clare Crawley six years ago, but it seems like the former Bachelor still has a lot to say about her love life. Ahead of her upcoming season of the franchise, Juan Pablo claimed Clare's new Bachelorette promo proves she's not over him, because the clip uses footage from the pair's fiery split. The promo — which is soundtracked by Keke Palmer, performing a cover of "Respect" — begins with Clare declaring that she wants "respect" before walking away from Juan Pablo on the 2014 finale episode.

"Interesting PROMO of Clare Crawley and the season of @BacheloretteABC," the former soccer player wrote on Twitter on September 2. "6 years LATER and I know WHO is the Juan that can’t get OVER Juan … Would LOVE if you take a GUESS?" However, he also seemed to add that his pun-filled post was just his way of poking fun at the Bachelorette's promo team, writing that "Clare got over [me] LONG time ago, just in CASE."

This behavior is pretty standard for Juan Pablo, who infamously capped off his controversial season of The Bachelor by dramatically breaking up with Clare in favor of pursuing a relationship with Nikki Ferrell. (They eventually broke up in 2014, after just seven months together.) After eliminating Clare during the finale, Juan Pablo reportedly whispered in her ear that he didn't love her, but instead loved "f*cking" her, which inspired the hairdresser to give him a good dressing down. "I would never want my children to have a father like you," Clare said, before storming away.

This is not the first time that Juan Pablo has commented on Clare's upcoming Bachelorette season in the months since she was announced as the new lead. Back in March, he appeared to shade the men who were originally chosen to compete for Clare's affections. "I just SAW the GUYS for @Clare_Crawley Bachelorette season and its gonna be INTERESTING seeing HER get hit on by KIDS in their 20s," he wrote on Twitter. "I think this MIGHT be the 3rd SEASON Im gonna watch." After Clare responded by telling him that he was "older than 99% of them" and still unable to "practice compassion and kindness," Juan Pablo attempted to clarify his tweets and defend himself.

"Hey, ALL I want is for you to FIND love, you taking it the WRONG way Clare," he wrote on Twitter. “Im VERY happy for HER… Can you EXPLAIN to me the Pile of poo show I GAVE her?” Juan Pablo added in a follow-up tweet that she will see things from his perspective when she is the one eliminating contestants on the show. "In this SEASON unfortunately you will also say goodbye to many, in the end it will be 2 and you WILL STAY with 1. You will understand EVERYTHING much better!" he wrote, adding, "I wish you GET your REAL love."

In addition to revisiting the Juan Pablo breakup, the new promo also offered fans their first look at Clare's upcoming season of The Bachelorette. "I have so much to share and I have so much to give," the hairdresser says at one point. "And I want that with a man. I know what I am looking for, and I'm so ready for this." Most notably, the clip shows Clare and former NFL player Dale Moss kissing on what appears to be the first night of filming.

On Aug. 6, multiple outlets reported that Tayshia Adams would replace Clare as the Bachelorette, after the hairdresser reportedly found love relatively early on in the filming process. According to Deadline, Clare knew that she had stronger feelings for Moss than the rest of her contestants, and decided to exit the show with him in order to avoid leading them on. Their romance and Tayshia becoming the new lead will reportedly all be shown onscreen, once Clare's season of The Bachelorette premieres on October 13.

More like this
'Bachelorette' Vet Clare Crawley Revealed Her Stunning Wedding Photos
By Stephanie Topacio Long
Zach Explained Why He Had To Send Bailey Home Early On 'The Bachelor'
By Brad Witter
'Bachelorette' Vet Clare Crawley Unveiled 2 Special Wedding Day Accessories
By Stephanie Topacio Long
A Guide To All Of Zach Shallcross' 'Bachelor' Filming Locations
By Brad Witter
Get Even More From Bustle — Sign Up For The Newsletter
From hair trends to relationship advice, our daily newsletter has everything you need to sound like a person who’s on TikTok, even if you aren’t.