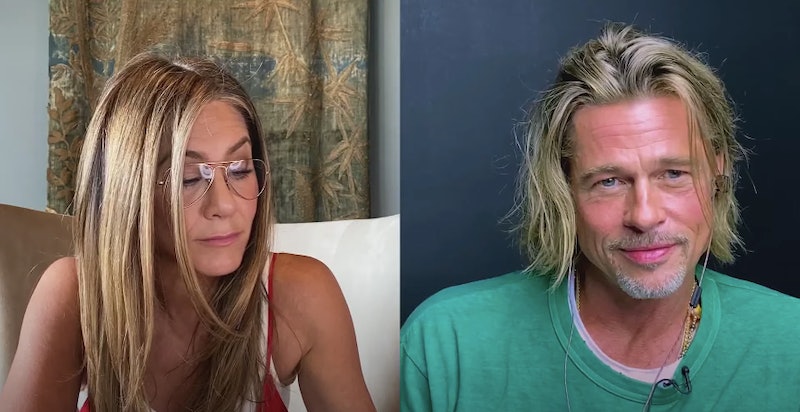 Alongside Morgan Freeman’s raunchy narration in his signature baritone, exes Jennifer Aniston and Brad Pitt reunited at the Fast Times at Ridgemont High table read for charity on Thursday, Sept. 17 — and the reunion sent the internet into a collective meltdown. The star-studded fundraiser, streamed on the Facebook page of actor Sean Penn’s nonprofit CORE (Community Organized Relief Effort), also featured Penn — who starred in the original 1982 film — Matthew McConaughey, Henry Golding, Jimmy Kimmel, Ray Liota, John Legend, Shia LaBeouf, Dane Cook, and Julia Roberts, while Freeman narrated scenes from the 1982 coming-of-age film. And even their celeb co-stars seemed unable to contain themselves watching the famous exes act out some of the more salacious scenes.

Yes, Pitt’s past infidelities became a moot point as fans on the internet swooned over his reunion with his ex-wife. The two, for their part, are on good terms publicly, and seemed genuinely happy to be working together again — an idea Anniston has expressed excitement over in the past. From the beginning, the Fast Times virtual reading had fans on the edge of their seats. When they signed on, Pitt greeted his ex with, “Hi, Aniston," and the Friends actor replied, “Hi, Pitt. How you doing, honey?” Later, things got a bit awkward as Pitt voiced Brad Hamilton, (originally played by Judge Reinhold), and Aniston voiced Linda Barrett (Phoebe Cates) to reenact that swimsuit fantasy sequence.

A lot of factors made it a sight to behold: Freeman’s “lord have mercy," Aniston and Pitt’s bashfulness, McConaughey’s creepy head nod, and Kimmel's inability to contain his laughter. However, it was Roberts who stole the show with her reaction. The actor (who voiced the role of Brad Hamilton’s sister, Stacy Hamilton, originally played by Jennifer Jason Leigh) was all smiles as Aniston and Pitt read dialogue from the raunchy scene. And the Jen-Brad shippers of the world couldn't help but relate.

This isn’t the first time the exes have caused a collective meltdown on the internet. Aniston and Pitt infamously reunited at the SAG Awards back in January, where they won awards for their roles in The Morning Show and Once Upon a Time in Hollywood, respectively. The two were all smiles as they exchanged words and hugs backstage, resulting in a viral photo of Pitt holding Aniston’s hand, unwilling to let it go. Fans collectively lost their sh*t and rehashed nostalgic memories of their marriage, and basically all felt exactly how Roberts looked throughout the table read. We only wonder what she thought about that SAG photo?

More like this
Jodie Turner-Smith & Joshua Jackson's Relationship Timeline Includes Her Proposing
By Jake Viswanath
Lindsay Lohan Just Recalled A Hilarious 'Parent Trap' Story
By Sam Ramsden
The 'Love Actually' Reunion Is Missing A Major Player
By Bustle UK
The 'Kenan & Kel' Reunion On 'SNL' Took A Dramatic Turn, Thanks To Keke Palmer
By Brad Witter
Get Even More From Bustle — Sign Up For The Newsletter