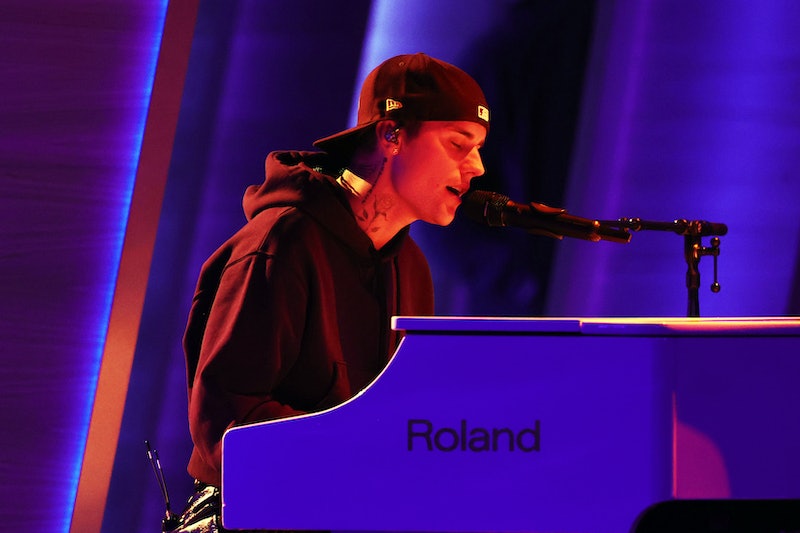 Justin Bieber performed a slowed-down, emotional rendition of “Peaches” at the 2022 Grammys and Twitter is confused. The pop star began on the piano, where he closed his eyes and belted out some of the nominated track’s least evocative lyrics about weed and badass b*tches. Most Bieber fans would likely agree that the words lend themselves well to the track’s original tempo, but it’s clear that this updated version wasn’t winning over folks online.

“Why is Justin singing peaches like it’s an emotional ballad about the death of a family member?” @fearlessummers tweeted. “It’s literally one of the most lyrically basic songs I’ve ever heard.” Several other viewers agreed, with some wondering why the piano was Bieber’s instrument of choice, and others pushing him to wrap up his performance ASAP. “OK Justin we get it you have peaches now wrap it tf up,” Twitter user @jooniewillow wrote. Others echoed those sentiments.

Although many people weren’t impressed by Bieber’s first live performance with his “Peaches” collaborators, Daniel Caesar and Giveon, he was still one of the artists nominated for the most Grammys at this year’s show. After Jon Batiste, who earned 11 nods and won the trophy for Album of the Year, the Justice singer was nominated for a total of eight awards. Unfortunately, he did not win in any of the categories he was nominated for, and Beliebers were quick to call out the Grammys for snubbing the “Anyone” crooner.

“Justin Bieber really should’ve won a grammy for peaches, that song was everywhere,” tweeted @damnsonidris. “What the Grammys got against JB?” Twitter user @swapitoutgal felt the same and demanded to know what “beef” the awards show has with the pop star. “They snubbed him for best new artist... they snubbed him for purpose... and now they snubbed for justice/peaches???” she wrote. “Like what is the fcking issue?”

Despite not being recognized by the Recording Academy this year, there is one person who watched Bieber’s performance and loved it (or at least it appeared that way). BTS’s Taehyung (aka V) was captured dancing to “Peaches” once the tempo picked up, and fans of the K-pop star definitely took notice. “TAEHYUNG WAS VIBING TO JUSTIN’S PERFORMANCE,” Twitter user @bizzleslust wrote. Another fan wrote simply: “Legend recognizes legend.”