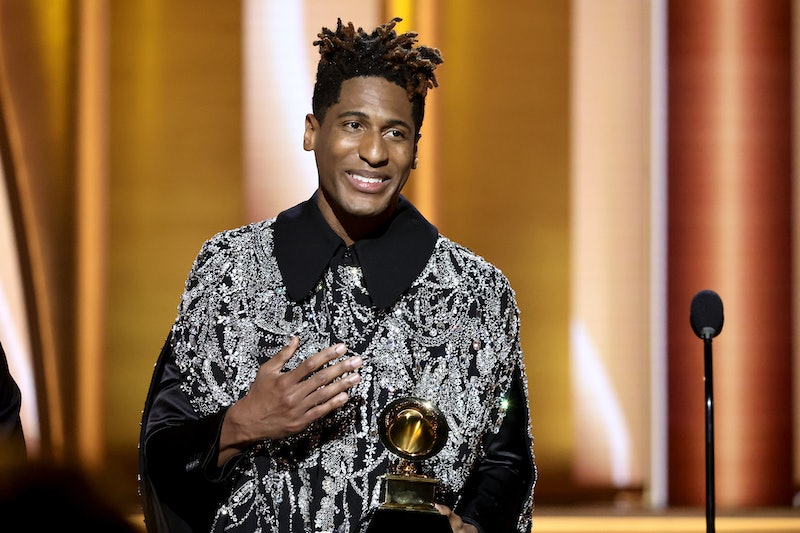 Reporting live from Las Vegas for music’s biggest night, it’s the Grammys night. With Lil Nas X, Olivia Rodrigo, Justin Bieber, Oscar-winner Billie Eilish, and more in the mix for the top awards for the 64th annual show, the red carpet was ablaze with big names and fashion moments — though the reactions weren’t all positive.

After the two-hour red carpet, which was a snooze to some viewers, comedian and The Daily Show host Trevor Noah took to a rooftop to kickstart the awards show fresh off of an online spat with Kanye West. West, BTW, was notably asked not to perform tonight despite being nominated for five awards. West’s performance ban comes after concerning online behavior toward his ex-wife, Kim Kardashian, and her new boyfriend, comedian Pete Davidson, which recently got him suspended from Instagram. While abuse isn’t a joking matter, some users on Twitter still cracked one-liners about West and Davidson getting into a physical altercation, referencing Will Smith’s now-infamous slap of Chris Rock at the Oscars last weekend.

As the night unfolds, here are the best memes and tweets from the 2022 Grammys:

First, viewers had plenty to say about the red carpet.

Naturally, Twitter was flooded with praise for BTS and their dapper looks.

During the pre-show, there was plenty of talk about that potential West-Davidson drama mentioned above.

But the aftermath of the Oscars slap also left some users hoping we won’t have to endure another viral celebrity moment that takes over online discourse for a full week.

Still, others joked that Smith’s slap set the precedent and are hoping for something even more wild to happen tonight.

After Noah’s opening monologue, viewers hopped on Twitter to joke about that peach mention.

Presenting the first award for the night, Questlove made a dig at The Slap, and Twitter was here for it since it occurred right before (and ultimately overshadowed) his win for Best Documentary at the Oscars. In presenting Song of the Year, he noted that he wanted to “make a memory” for the nominees and winner tonight.

As soon as BTS hit the stage and V whispered in Rodrigo’s ear, Twitter absolutely lost it.

Anderson .Paak’s wig continued to be a focal point throughout the night.

After Amy Schumer pitched Ukrainian President Volodymyr Zelensky to appear at the Oscars to no avail, he appeared in a taped segment at the Grammys asking for support for his country amid the ongoing war with Russia. Then, John Legend performed his new song “Free” and was joined onstage by Ukrainian singer Mika Newton and Ukrainian poet Lyuba Yakimchuk. Viewers were mixed about Zelensky’s appearance, with many noting that the moment felt performative and “dystopian.”

Doja Cat and SZA’s acceptance of the Best Pop Duo/Group Performance award provided a memorable and relatable moment late in the night. After their win was announced, fellow category nominee Lady Gaga helped SZA (who was on crutches) up the stairs while Doja Cat rushed to the stage after she heard her name announced from the bathroom. Doja shed a few tears for the win, acknowledging that while she typically downplays things, she knows this is a huge deal. Twitter loved Doja’s genuine joy and the authentic moment between the artists, and celebrities like Megan Thee Stallion and Lil Nas X chimed in to congratulate them for their win for “Kiss Me More.”

In the biggest shocker of the evening, Jon Batiste took home the prize for Album of the Year, beating out heavy-hitters Rodrigo, Eilish, and Taylor Swift among other nominees. In his acceptance speech, a surprised Batiste spoke about the power of music, stating that “there is no best musician ... the creative arts are subjective, and they reach people at a point in their lives when they need it most.” Batiste even shouted out Rodrigo’s album, saying he had an “out of body experience” while listening to Sour. He is the first Black man to win the award in 14 years, and while many on Twitter celebrated the win, others were disappointed that Rodrigo didn’t take the top prize.