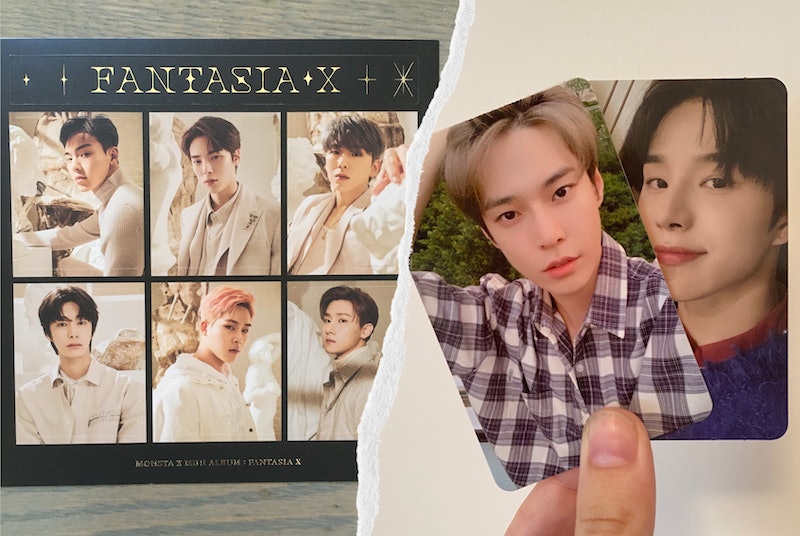 Opening a K-pop album for the first time is an experience — so much so that there’s a whole YouTube community dedicated to posting unboxing videos. K-pop albums are inherently collectible. Whether it’s a bold, powerful concept like the one seen in Blackpink’s The Album or a joyful, lighthearted one like BTS’s latest single album Butter, these boxes are meticulously prepared and designed as physical companions to the music itself. They’re also filled to the brim with goodies that will leave fans excitedly sharing images of their hauls online or setting off on a journey to collect and complete their sets.

The lead up to the release of these albums, as well as the extras included in them, is almost as important as the release itself. In fact, it’s commonplace for K-pop groups like ITZY to reveal what’s inside their upcoming albums as a way to get fans excited to pre-order the album. In general, a K-pop album will be released in multiple versions; although the music is the same for every version, the album’s designs, photo cards, and imagery will all be different, which only adds to its collectability. They can also be released in other formats including on vinyl like Wendy and Joy of Red Velvet, cassette tape, and Kihno Kits with their own exclusive goodies too.

The unique gifts, beautiful designs, and luxurious packaging influence fans to spend hundreds of dollars on merchandise each year when it comes to stanning their favorite groups and artists. Let’s dive into what’s inside these K-pop boxes for Billboard chart-smashing tunes.

First thing’s first: the CD. Just like any other album, you still need a CD (or digital download code) to be able to listen to it. Still, K-pop albums can add an extra level of excitement by randomizing the artwork featured on the front of the CD, which can be a lovely surprise when opening up a new album for the first time. You can see that variation in action in TWICE’s 2021 album Alcohol-Free, which included individual artwork of the group’s nine members on its CD.

Photo cards are one of the first things that set K-pop albums apart. They are a top collector prize among fans, who often trade and sell their collections with one another online and at concerts. Simply put, they are wallet-sized, often rectangular (but not exclusively) images of a K-pop group, and they are randomly distributed. Photo cards can take on a variety of forms — including transparent and lenticular versions — and each member of the group will have multiple versions of their own photo card. In addition to images of individual members, there can also be group photo cards too.

Depending on the number of versions an album has, the number of photo cards for fans to collect multiplies exponentially. BTS’s 2019 Map of the Soul: Persona, for example, came in four versions that each contained seven individual photos of the group’s members, so “completionists” were on the hunt for 49 photo cards in total. If you’re a fan of larger groups, like the 23-membered group NCT, that number may grow. There can also be regional differences in photo cards. For example, SuperM’s 2020 album Super One contained different photo cards in the U.S. than in Asia.

Album lyrics are typically printed in their own booklet or on a fold-out poster. They’re typically written in Korean, but can also be translated in multiple languages like in NCT 127’s 2017 album Limitless, which saw its lyrics translated into English, Chinese, and Japanese. On certain occasions, an album’s lyric book and photo book are combined together.

A photo book is a collection of aesthetically pleasing group and individual photos that are in line with the album’s overall concept. Take the photo book from Stray Kids’ 2020 album IN生 (In Life) for example, which was filled with images of the group dressed in jewel tone clothing while posing in a darkened, dilapidated building. The images were then decorated with bright colors and graffiti to align with the group’s powerful sound heard in their title track “Back Door.”

On the opposite side of the concept spectrum, other albums like StayC’s Staydom and Red Velvet’s ReVe Festival Day One feature brighter, summertime concepts that are bolstered by the packaging’s use of livelier colors and cartoon explosions to show their more cheerful side.

These are the kind of postcards that you’d much rather keep than send in the mail. Similar to photo cards, postcards can center on a singular member or include group imagery. The number of postcards included in an album can also vary — some albums provide one or two postcards, like EXO’s Don’t Mess Up My Tempo, while others may provide an entire set featuring every member.

Who doesn’t love stickers? K-pop albums often have their fair share of them. They can be found in Tomorrow X Together’s Blue Hour, EXO-CBX’s Blooming Days, and Stray Kids’ I Am Who just to name a few. You can stick them all over your phone case, notebook, or just about anywhere.

Posters are often included with the purchase of an album. They’re usually larger versions of the images seen within the lyric books, but blown up to size so that they can be proudly displayed on your wall. In addition to the large posters, albums sometimes include smaller, folded posters, like in ASTRO’s Blue Flame and GOT7’s Breath of Love: Last Piece.

While these photos might mimic the cute design of a typical Polaroid, they’re often printed on a lighter type of paper instead so that the members don’t have to pose fo an incredible amount of photos and use up a ton of expensive film in order to include one in every album. Check out Oh My Girls’ 2021 album DearOHMYGIRL and its collection, below, for an example.

There are some albums, however, that do include real Polaroids. K-pop artists like SHINee’s Key have included a small number of their own self-taken Polaroid photos, which were distributed in a small batch of albums. These photos are extremely rare and highly sought-after, encouraging fans to purchase even more albums in order to discover one.

Bookmarks are often found in some of K-pop’s softer, more romantic albums as they give off an air of sophistication and style. In the past, bookmarks have been included in Seventeen’s 2021 album Your Choice, NU’EST’s Romanticize, and Chen of EXO’s solo album April & a Flower.

Depending on an album’s concept, other fascinating items will stand out from what’s traditionally included in a K-pop album box. Take EXO’s 2017 album The War: The Power of Music for example. Heavily inspired by comic books, every album included a single page of a larger comic, and when combined, the pages told the story of EXO on a mission that tied in with the album’s music video.

SHINee’s 2021 album Atlantis took on a nautical, underwater concept with its design and single “Atlantis,” so it was extremely fitting that the album included a voyager card and certificate for fans sailing along with them on their music journey. IZ*ONE’s One-reeler Act IV expanded on the group’s cinematic concept by including photos of the group together spliced into a film reel, so always be ready to expect the unexpected when it comes to K-pop albums.