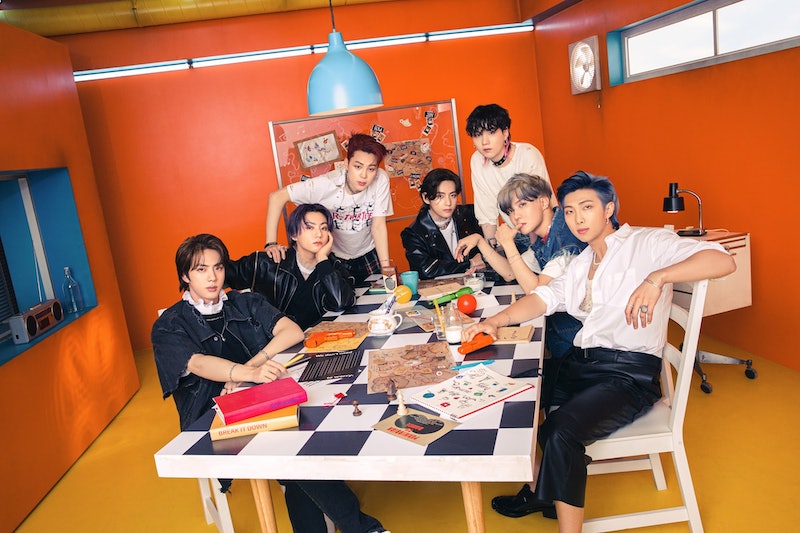 “Permission To Dance” from global sensation BTS has just debuted at No. 1 on the Billboard Hot 100 rankings announced on July 19. The news comes quickly after the powerhouse septet released the song on their fandom’s July 9 birthday and received a social media shout-out from music legend Elton John on the following day. BTS replaced themselves at the top spot on the Hot 100, knocking off their previous single “Butter,” which dropped to No. 7 after seven weeks at No. 1.

Part of their CD single Butter, “Permission To Dance” is a funky, upbeat pop track that encourages listeners to put all of their worries aside and make time to just dance and be joyful. Its uplifting lyrics have become a source of comfort for fans around the world. The lyrics include the line, “When it all seems like it’s wrong, just sing along to Elton John,” which the “Tiny Dancer” singer tweeted to show his support. The song was co-written by Ed Sheeran, who not only helped write the track but also hilariously spoiled its title and release details in multiple interviews before BTS even announced the song, much to BTS’s amusement.

“Permission To Dance” marks the group’s fifth Hot 100 No. 1 since September 2020, following “Butter,” “Life Goes On,” “Savage Love (Laxed — Siren Beat),” and “Dynamite,” the latter of which was nominated for a Grammy. To give you a reference for just how popular the group is as well as a sense of their meteoric success in the U.S. alone, Billboard reports that the last artist to record five No. 1s in this short timeframe was Michael Jackson with songs from his album Bad.

Speaking to Bustle in May, J-Hope explained that, above all, the group aims to make heartfelt music that is reflective of their mindsets and the times they’re currently living in. “I know it’s not easy to show your real self, but when it comes to music, it’s not like that,” he said. “I don’t want to change this. I want to keep making honest, genuine music.”

BTS performed “Permission To Dance” for the first time on The Tonight Show.

BTS also just announced the “Permission To Dance” challenge in collaboration with YouTube Shorts on July 19. Fans will be encouraged to post their own 15-second YouTube videos dancing along to the track’s iconic choreography starting on July 23. The group will feature their favorite dances in an upcoming compilation video too, so be sure to hashtag your video #PermissionToDance and #Shorts if you want to be included. The event ends on Aug. 14 and don’t worry, if you’re feeling a bit unsure of what to do, BTS created their own YouTube Short to inspire fans to dance along with them.

The group has not reacted to “Permission To Dance” reaching No. 1 yet, but if it’s anything like the way they reacted when “Dynamite” landed on top, then it’ll look like this: