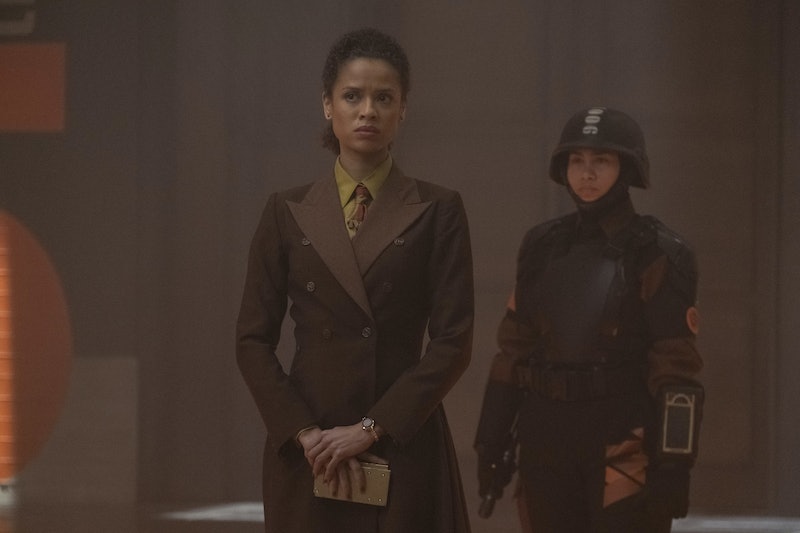 Spoilers ahead for Loki Episode 5. Following the feel-good highs of Loki’s penultimate episode — Mobius saves the day! Loki and Sylvie enchant together! So many variants! — the big question at the heart of the show remains. Who is pulling the strings at the Time Variance Authority? Fortunately, the God and Goddess of Mischief are closer than ever to finding some answers. After successfully fighting off the violent cloud monster Alioth in brilliant, magical fashion, the pair began their approach to a mysterious mansion beyond the desolate Void. Who (or what) awaits them inside is likely to be Loki’s biggest threat of all. One possibility is that it’s Kang the Conqueror, a time-traveling supervillain who has ties to both Ravonna Renslayer and Alioth in the Marvel Comics.

Kang is a frequent frenemy to the TVA in the comics’ lore — he even has a “working relationship” with its agents, per Marvel, since his time travel tends to keep him on their radar. Straight from the 31st century, Kang’s futuristic technology and personal penchant for conquest make him a major threat. Here is everything you should know about Kang the Conqueror so far and how Loki could be setting up years’ worth of upcoming entries in the Marvel Cinematic Universe, including one in which Kang is confirmed to star.

Kang The Conqueror In The Marvel Comics

The biggest “big bad” in the MCU so far has been Thanos, but Kang the Conqueror’s comics history goes back even further than the purple Titan’s. In fact, the time traveler is almost as old as the Avengers themselves, having been introduced in Avengers No. 8 in 1964.

In the comics, Kang is bent on claiming as many worlds as possible and appears to have a special grudge against Earth, whose “Mightiest Heroes” defeat him on his first foray back to his ancestors’ home planet. Another world he conquers, the Kingdom of Carelius, is where he picks up his lover and frequent partner-in-crime: Ravonna Renslayer. Nods to this comic history can be seen throughout Loki. As Collider pointed out, Renslayer’s helmet reads “A-23,” which is likely a reference to her character’s introduction and first meeting with Kang in Avengers No. 23.

As CBR reports, Kang ultimately grew “tired of fighting and losing his loved ones in multiple timelines, [so] decided to give up his life as Kang in order to serve the Time-Keepers” and “defend timelines from those who would upset them.” If Kang does appear in Loki, perhaps it’s via subversion of this plot — that instead of serving the Time-Keepers’ wishes, Kang created the Time-Keepers and the TVA to manifest his own perfect timeline and avoid personal tragedies. From what we know about Kang’s vast, tech-equipped powers in the comics, it would certainly be possible.

Loki Clues About Kang The Conqueror In The MCU

Though the Kang theory has been a part of Loki discourse since the show premiered, it gained even more traction in Episode 5, thanks to the surprise addition of Alioth. Introduced in 1993’s Avengers: The Terminatrix Objective, the monster is discovered by Renslayer at the edge of Kang’s empire — a more powerful being than Kang with a way bigger kingdom, too. (This comic also shows Renslayer masquerading as Kang and ruling over his domain for him, further tying Loki’s TVA judge to the time-traveling villain.)

As Sylvie points out in Episode 5, Loki’s Alioth is more like a gatekeeper than an all-powerful entity — something to get past, sure, but not necessarily the final boss itself. Of course, the series has already proven its penchant for mixing and matching comic book source material (Sylvie is neither Lady Loki nor Enchantress but a hybrid of sorts), so the specifics of Alioth’s relationship to Kang don’t matter as much as the fact that the show included it at all.

Marvel Has Major Plans For Kang The Conqueror

Of course, even with the multiple connections, Kang’s potential role in Loki could be chalked up to wishful theorizing — if not for the fact that the villain was already confirmed to appear in a future MCU project. As Deadline reported last September, Jonathan Majors joined the cast of 2023’s Ant-Man and the Wasp: Quantumania as the powerful villain. And in early July, Majors himself visited Golden Apple Comics in Los Angeles and signed a Kang the Conqueror comic — the actor’s first-ever autograph as Kang, the shop revealed.

Ant-Man’s story has long been intertwined with time travel and its devastating effects (time to rewatch that heartbreaking Endgame reunion scene with Cassie). In fact, several observant viewers pointed to a tiny detail in the Quantum Realm scene in Ant-Man and the Wasp as a clue to Kang’s looming presence. What looks like a futuristic city can be seen in the background, with some citing it as the TVA — “Time works differently” in the Quantum Realm, Scott says in Endgame — or perhaps Chronopolis, Kang’s home base in the comics.

Ant-Man wouldn’t be the only project Kang’s introduction could influence. The Fantastic Four franchise will finally mesh with the MCU in an upcoming film — and in the comics, Kang, aka Nathaniel Richards, is suggested to be a far-future descendant of Reed Richards (Mister Fantastic), according to Inverse.

As Games Radar noted, the Franklin D. Roosevelt High School pen seen in Renslayer’s office might also be a reference to the Fantastic Four and, in turn, their connection to Kang. Molecule Man, a foe to the Four with ties to the Multiverse, hailed from Brooklyn, where he was bullied in high school. (Though not explicitly stated as part of Molecule Man’s story, Franklin D. Roosevelt High School is a real school in the borough.)

However it happens, it looks like Loki could be setting up some major MCU conflict in the form of a yet-unseen Kang the Conqueror. Much like Thanos was first introduced in a small scene in 2012’s Avengers, Kang’s arrival in Loki would be a tiny but powerful nod at future events.

More like this
Netflix Shut Down 'Bridgerton' S3 Rumours About A “Very Dark” Storyline
By Bustle
Bill & Frank’s 'The Last Of Us' Episode Has Twitter Emotionally Wrecked
By Alyssa Lapid
'RHOSLC' Star Jen Shah Refuses To Do A Post-Sentencing Interview With Andy Cohen
By Brad Witter and Jake Viswanath
Everything To Know About 'Only Murders In The Building' Season 3
By Gretchen Smail and Kadin Burnett
Get Even More From Bustle — Sign Up For The Newsletter
From hair trends to relationship advice, our daily newsletter has everything you need to sound like a person who’s on TikTok, even if you aren’t.