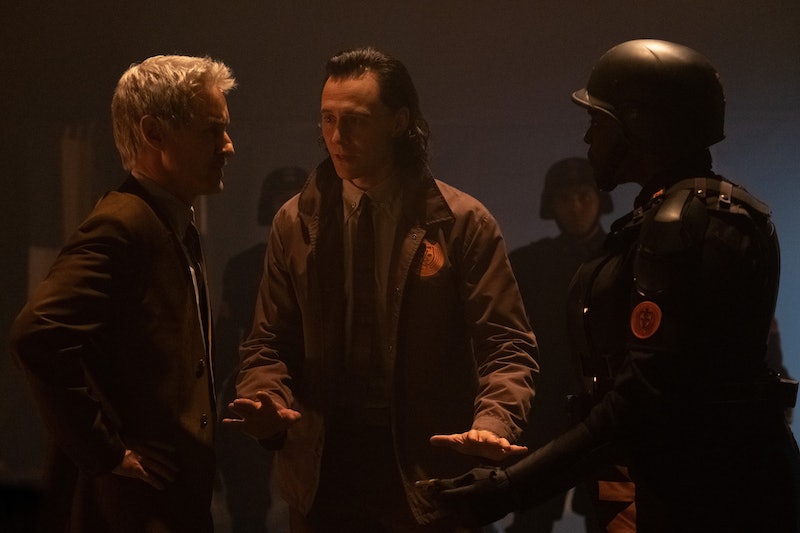 Spoilers ahead for Loki Episodes 2 and 3. By the end of the Time Variance Authority’s disastrous mission at Roxxcart, Loki is gone. Actually, the Lokis are gone. Having just met his literal match in the form of an apparent Lady Loki, horns and all, the God of Mischief couldn’t pass up the chance to escape with this dangerous new variant named Sylvie (played by Sophia Di Martino). Where he’s going was initially a mystery — an early Loki trailer shows him sitting quite close to his blonde counterpart in a bizarre, purple-cast setting that was later revealed to be Lamentis-1 — but in the meantime, Lady Loki, aka Sylvie, presents even more questions.

Even though viewers haven’t seen this iteration of Loki in the Marvel Cinematic Universe (she was introduced in the comics during a 2007-2008 Thor run written by J. Michael Straczynski), the character ties into several key events from the Thor films. In fact, The Dark World featured a sneaky nod to Lady Loki that makes even more sense now that she’s been introduced. As fans wait to see what Loki and his alter ego are up to, here is everything you should know about Lady Loki so far.

Who Is Lady Loki In The Comics?

In the comics, after Ragnarok destroys the physical realm of Asgard, the spirits of its people find new hosts on Earth. For Loki, that host turns out to be a dark-haired woman Thor initially confuses for Lady Sif.

Though Lady Loki claims to see her form as a symbol of rebirth (“I have no more schemes in me, Thor ... I only wish to live and be happy”), it becomes clear a few lines later that this version of Loki is no less mischievous than the first. She then quickly makes plans with Doctor Doom to unleash some troublesome Asgardians.

Later, in the Loki: Agent of Asgard comic run, readers met Lady Loki again. This time, she wasn’t occupying someone else’s body but was simply a new form that the genderfluid Loki assumed. Whatever the specifics of her appearance, Lady Loki — like Loki — pretty much means mischief, just like the character we’ve come to know and love over the last decade.

How Does Lady Loki Connect To Thor?

Though Lady Loki is new to the MCU, a potential nod to the character can be seen as early as The Dark World. In the scene where Thor and Loki prepare to leave Asgard, Loki has some fun with illusions — leading to that iconic Captain America cameo — and even gives Thor the appearance of Sif at one point, remarking, “You look ravishing.” In this case, it’s Thor and not Loki who takes on the new look, but the exchange is certainly reminiscent of Lady Loki’s introduction in the comics several years earlier.

Interestingly, Deadline reported that Jaimie Alexander, who portrayed Sif in the first two Thor films, will be back for 2022’s Thor: Love and Thunder. The outlet also referenced sources who claimed Alexander could have a guest role on Loki. If that’s true, Lady Loki’s role just got a lot more interesting.

As YouTube channel New Rockstars theorized last year, the series’s Lady Loki could even mean Loki survived Thanos in Infinity War... maybe. Though it would be a long shot, one video posits that Loki’s “essence” could have inhabited a new body to escape death, much like it went down in the comics post-Ragnarok.

Will Loki & Lady Loki Get Together?

Following a Vanity Fair article in which Loki head writer Michael Waldron teased that there are “love stories” to look out for in the show, Inverse theorized that there could be a romance between Loki and Lady Loki, which was further expanded on by fans following their chemistry in Episode 3. Though the comics’ Lady Loki is very much still Loki (i.e., not a separate person Loki could couple up with), the nature of variants and time travel on Loki could make it possible, if bizarre. It’s possible Waldron is just hinting at Loki and Mobius’ budding bromance, as he mentioned to VF, or even Ravonna Renslayer’s origin story, but whatever happens, it’s bound to be an entertaining ride.

More like this
'The Sandman’s Ending Is A Departure From Neil Gaiman’s Comic Book Series
By Kadin Burnett
The 'PLL: Original Sin' Creators Say A’s Identity Will Be “Very Clear” By The Season Finale
By Alyssa Lapid
Everything To Know About The Sandman Season 2
By Kadin Burnett
Gabby & Rachel Reveal How That 'Bachelorette' Rose Ceremony Twist Happened
By Grace Wehniainen
Get Even More From Bustle — Sign Up For The Newsletter