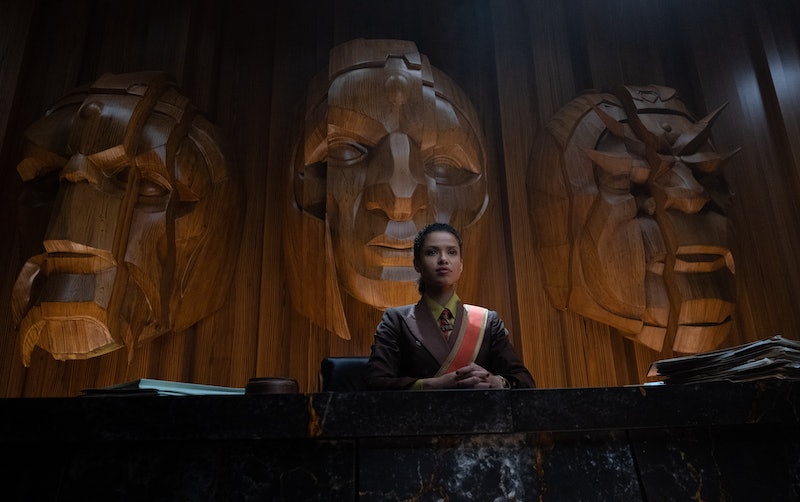 Spoilers ahead for Loki. From the start of Loki, Judge Ravonna Renslayer has proven herself to be a powerful presence in the Time Variance Authority — wielding the power to prune and reset the God of Mischief but choosing not to, albeit reluctantly... until Episode 4. This early decision positioned Renslayer as an ally to Mobius M. Mobius and, indirectly, Loki himself (of course, after that Roxxcart escape and subsequent TVA shenanigans, she’s definitely regretting it). But should viewers be so quick to judge the mysterious figure helming the TVA at the behest of the even more mysterious Time-Keepers? As it turns out, Renslayer has a complicated comics backstory — one that’s seen her keep some pretty questionable company — and it may not be too long before that history comes to life on screen.

In conversation with The Hollywood Reporter, Gugu Mbatha-Raw explained that there would be “somewhat of an origin story for Renslayer,” her character, in the series. “She has to make some morally ambiguous choices ... there’s a lot of secrets. There’s betrayal. There’s lots of layers of Renslayer to come.” Director and executive producer Kate Herron specifically included Mbatha-Raw in her pitch for Loki, telling Bustle that “there's a lot of interesting, juicy stuff to talk about there being a woman in power.”

Here is everything you should know about Ravonna Renslayer in the Marvel comics — and how her presence in Loki could help progress Phase 4 of the Marvel Cinematic Universe in a major way.

Ravonna Renslayer Is Royalty In The Comics

According to Marvel, the comics’ Renslayer is a princess — the daughter of King Carelius who rules on another version of Earth in the 40th century. However, as Mbatha-Raw told Bustle’s Gretchen Smail, this iteration of her character seems to exist “pre all of the potential stuff that people may have read about.”

“There is an anticipation there,” she explained, referencing Renslayer’s comics backstory, “but I didn't have to feel the weight of playing all of that because what we're doing comes before.”

Mbatha-Raw also told The Hollywood Reporter that the onscreen version of the character “worked her way up” to her current post and “wasn’t born into power,” further suggesting a possible departure from the comics. One thing both Renslayers have in common, though, is that they are formidable fighters. (Anyone who watched her battle with Sylvie and Loki in Episode 4 knows that to be true.) Mbatha-Raw referenced the character’s military background, and the comics’ Renslayer is a skilled “space-time” pilot who dons a futuristic suit and weapons as the Terminatrix. The suit’s hologram technology even allows her to assume different identities — including a major MCU villain-to-be, Kang the Conqueror.

How Renslayer Connects To Kang The Conqueror

The muted bureaucracy of the TVA on Loki is a far cry from Renslayer’s digs in the Marvel comics — a palace that Kang the Conqueror is intent on, well, conquering. Though the princess first brushes off the time-traveling villain as a “commoner,” she is ultimately charmed and actually puts her life on the line for him. Renslayer is revived, though, and an on-and-off relationship with Kang begins — with the help of that holographic technology, she even rules over his home of Chronopolis when Kang can’t do it himself.

In the comics, the TVA and Kang have a “working relationship,” according to Marvel — and in the show, it seems like Renslayer is the only TVA official senior enough to interact with a threat of his size. As is revealed in Episode 2, Mobius has never even met the Time-Keepers, while Renslayer appeared to know their every move.... that is, until Episode 5, when it became clear that she wasn’t up-to-date on everything and even had to deceive Miss Minutes in order to gain more intel.

Renslayer, who has also been referred to as the “Mistress of Time,” became both a friend and foe to the Avengers. With a comics backstory this complicated, it follows that her onscreen iteration could be just as tricky. Mbatha-Raw teased to Bustle that even though Renslayer may be “somewhat indoctrinated” by the Time-Keepers’ ideology, “there’s a bit of room for her to grow in her social conditioning ... as we get into the show.”

Now about that Chronopolis...

You might think you haven’t seen the city with a time-y name in the MCU just yet — but even the most ardent re-watcher probably missed its potential introduction all the way back in Ant-Man and the Wasp. (To be fair, it was a pretty microscopic — er, subatomic — Easter egg.) As Reddit user ak2sup pointed out in 2019, during Hank Pym’s quest to save Janet Van Dyne, there’s an apparent city hiding in the surreal, colorful backdrop of the Quantum Realm. It has tall, futuristic buildings and is even surrounded by a transparent dome — which, the Redditor observed, looks very reminiscent of Chronopolis in the comics. Janet drives home the point further in a deleted scene, telling Hank that there are “worlds upon worlds” and “entire civilizations” in the Quantum Realm.

Other theories point to the city being the TVA itself. As Screen Rant explains, Chronopolis is located in the “timeless reality” of Limbo — which sounds sort of similar to the Null-Time Zone that Renslayer and the TVA call “home.” Though Kang is set to make his official debut in 2023’s Ant-Man and the Wasp: Quantumania, it would make perfect sense for him to be introduced alongside his sometimes-lover, Renslayer, in Loki — especially given how deeply immersed in tricky time travel both Loki and Ant-Man’s stories are.

Episode 5 saw Sylvie and Loki enchant Alioth and gain entrance to what the smoke monster was really hiding: in a castle surrounded with glimmers reminiscent of the Quantum Realm. With Mobius returning to burn down the TVA and Renslayer on the variants’ heels and looking for more clarity, the Loki finale will be quite revealing when it comes to who is the true villain and calling all the shots.

More like this
Everything To Know About 'Evil' Season 4
By Meguire Hennes
'The Sandman’s Ending Is A Departure From Neil Gaiman’s Comic Book Series
By Kadin Burnett
The 'PLL: Original Sin' Creators Say A’s Identity Will Be “Very Clear” By The Season Finale
By Alyssa Lapid
Everything To Know About 'Westworld' Season 5
By Sophia Moore
Get Even More From Bustle — Sign Up For The Newsletter