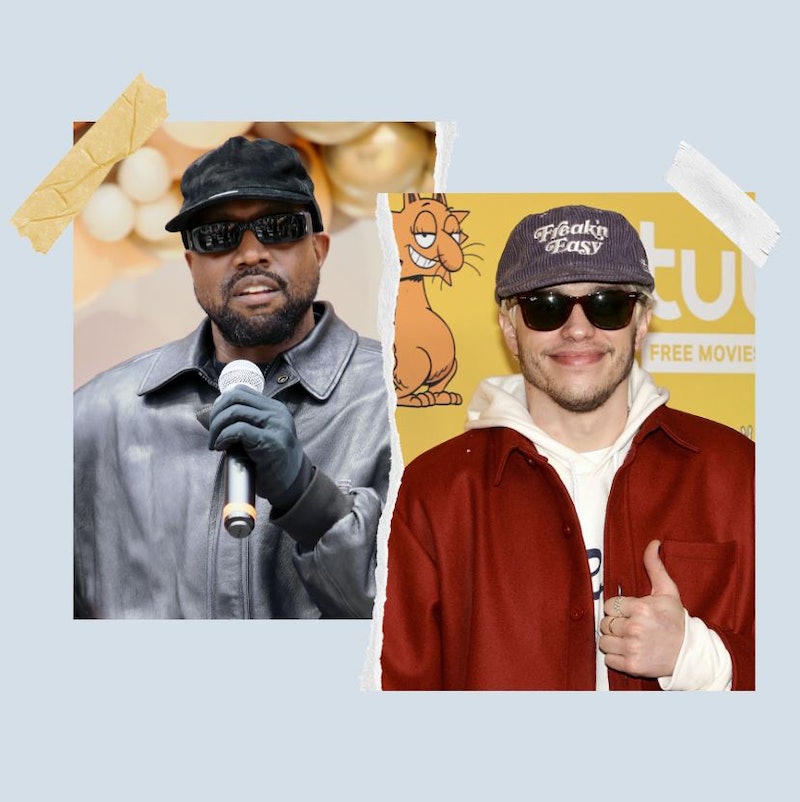 When Kanye “Ye” West dropped his new “Eazy” track on Friday, Jan. 14, the 22-time Grammy winner took a swipe at estranged wife Kim Kardashian’s rumored boyfriend, Saturday Night Live’s Pete Davidson. “God saved me from that crash / just so I can beat Pete Davidson’s ass,” Ye raps, referencing the 2002 car accident that spawned his platinum hit, “Through the Wire,” the following year. After West mentions Davidson’s name on the song, a Kardashian-sounding voice can also be heard in the background asking, “Who?”

Though Kardashian filed for divorce from West after seven years of marriage last February, the musician insisted on the track that the proceedings have been amicable. “We havin’ the best divorce ever / If we go to court, we’ll go to court together,” West raps, adding, “Matter of fact, pick up your sis, we’ll go to Kourt’s together,” presumably referring to his ex’s sister, Kourtney Kardashian.

Ye’s candid lyrics also mention co-parenting his and Kardashian’s four children: North, 8, Saint, 6, Chicago, 3, and Psalm, 2. He seems to get critical, rapping, “I got love for the nannies, but real family is better / The cameras watch the kids, y’all stop takin’ the credit / Non-custodial dad, I bought the house next door / What you think the point of really bein’ rich for? / When you give them everything, they only want more / Boujee and unruly, y’all need to do some chores / Rich-ass kids, this ain’t yo mama house / Climb on your brother’s shoulders, get that Top Ramen out.”

A recent incident surrounding Davidson’s involvement in West’s kids’ lives might have precipitated the track’s diss. In a new Hollywood Unlocked interview, the rapper claimed that Kardashian’s security stopped him at the gate when he was dropping their kids off from school, and wouldn’t let him go inside her house with daughter North.

“My daughter wanted me to go inside. I was like, I am the richest Black man and North’s father, right, and the security was able to stop me from going into the room with my daughter and that had not been defined,” West said. “And I am hearing that the new boyfriend is actually in the house that I can’t even go to.”

Earlier in the interview, he also referenced Kardashian and Davidson’s relationship, including his ex’s October SNL appearance, which he attended: “How you gonna bring me to SNL and kiss the dude you dating right in front of me, and everybody’s like, ‘Aw, that’s cool.’ I can have my principles and things I’ve changed things, and I backslide, and I haven’t been the best Christian and things the media can make seem some kind of ways… But at the end of the day, I’m Jesus gang. I’m about family, just me and my kids, parenting. And I mean, my kids’ mom we not together. I’m still going to be the best dad.”

Though Kanye has made no secret of wanting to get back together with Kardashian since their split, he appears to have moved on with Uncut Gems actor Julia Fox, who discussed West, Kardashian, and Davidson on her Behind the Scenes with Julia Fox podcast. Insisting that it’s “all love” and “really not that serious,” she added that “it is funny to see where people go with their conspiracy theories. … I love the Paper Magazine cover of me and Pete, that shoot that we did and we’re the Barbie dolls.”

Despite the drama, a source told People in August that it was “very important” to Kardashian that the “kids spend as much time as possible with Kanye” and that she was “focused on co-parenting” with her ex.

More like this
Everything You Need To Know About Kanye's Post-Kardashian Dating Life
By Bustle Editors
Did Pete Davidson Remove His Kim Kardashian Tattoos? Photos Point To Yes
By Alyssa Lapid
North West Will Make Her Acting Debut Alongside Mom Kim Kardashian
By Radhika Menon
Kim Kardashian Gives “Bucket List Dream” Lecture At Harvard
By Alyssa Lapid
Get Even More From Bustle — Sign Up For The Newsletter
From hair trends to relationship advice, our daily newsletter has everything you need to sound like a person who’s on TikTok, even if you aren’t.