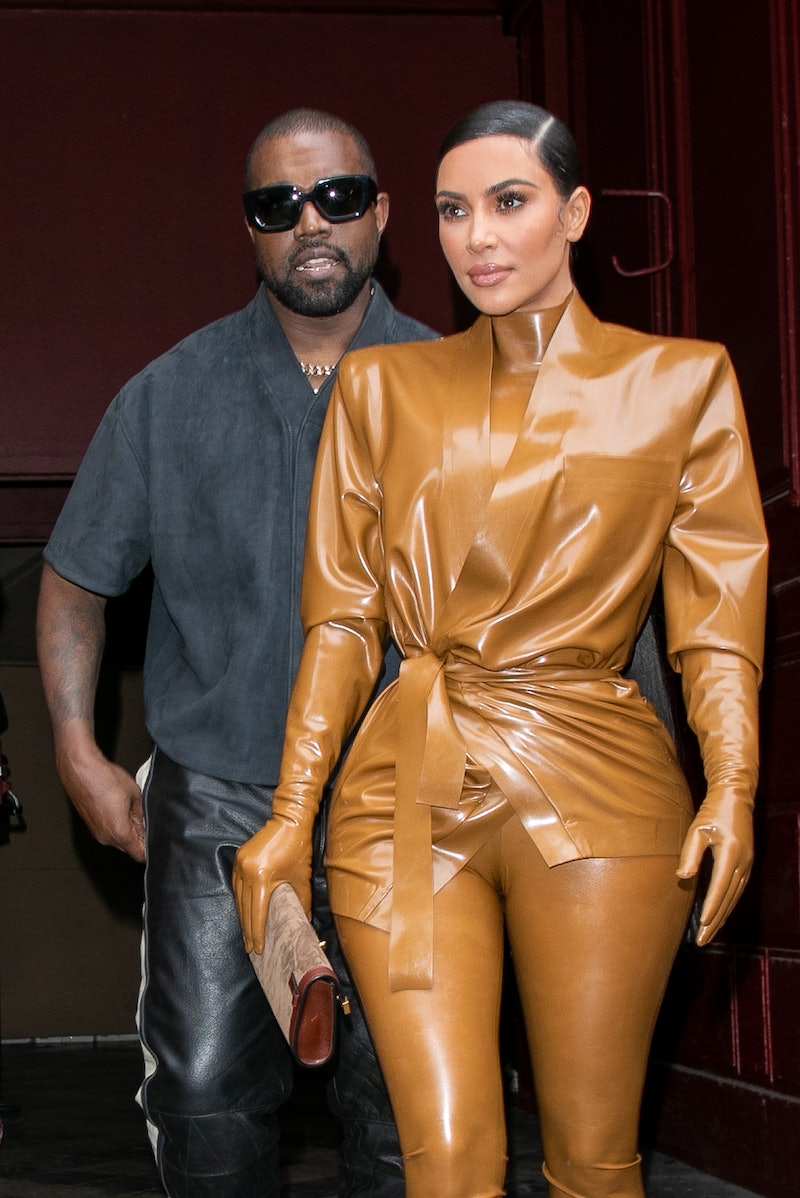 Kanye West held a second listening party for his upcoming album, Donda, at Atlanta’s Mercedes-Benz Stadium on Thursday, Aug. 5, and once again his estranged wife, Kim Kardashian, was there to hear lyrics she may have inspired. The rapper got personal when he premiered a new track that may be titled “Lord I Need You,” according to People, with lyrics seemingly alluding to the couple’s split and the impact it’s had on West.

“Time and space is a luxury / But you came here to show that you’re still in love with me,” West rapped, which sounded like an obvious nod to Kardashian showing up to both listening parties. Despite their ongoing divorce, she flew in to support her ex with their four children — each clad in black — in tow. At least in West’s eyes, though, there may have been another reason for her presence.

The multi-Grammy winner, who has been working on his upcoming album while living in the stadium, also premiered updated lyrics to his track “Love Unconditionally,” according to Buzzfeed. During the first listening event, the lyrics were “I’m losing my family”; however, on Thursday, West rapped, “I’m losing all my family / Darling, come back to me,” per the outlet.

Though West seems to be hinting at the couple harboring lingering feelings, a source who spoke to People made it clear that right now they’re just focusing on co-parenting, which is why Kardashian has been flying the kids from Los Angeles to Atlanta while he works on his latest album. “It’s very important to her that the kids spend as much time as possible with Kanye,” the source shared. “Kim is trying to be supportive. She is focused on co-parenting. Nothing has changed otherwise. They are still moving forward with the divorce.”

The reality TV star filed for divorce from West in February and got candid about why during the last season of Keeping Up With the Kardashians. “I never thought I was lonely ... I always thought that’s totally fine, I could just have my kids, my husband moves from state to state,” she said. “And I just am on this ride with him, and I was OK with that, and then after turning 40 this year, I realized, like, ‘No, I don’t want a husband that lives in a completely different state to me.’ I thought, ‘Oh my God, that’s when we’re getting along the best,’ but then that is sad to me, and that’s not what I want.”

Whether or not they’re together, or even if Kardashian is “still in love” with him, they’ll always have a bond. Later in the show’s reunion, Kardashian noted that despite their differences, they will “always be family.”

More like this
Shakira’s Record-Breaking New Song Takes Direct Aim At Her Ex Gerard Piqué
By El Hunt
Prince Harry Incorrectly Recites Christina Aguilera’s “Genie In A Bottle” Lyrics
By Jake Viswanath
Hilary Duff's Husband Matthew Koma Has Her Name Tattooed On His Butt
By Jake Viswanath and Stephanie Downs
Who Is Allison Williams Dating After Her Divorce? She’s Engaged With A Child
By Jake Viswanath
Get Even More From Bustle — Sign Up For The Newsletter
From hair trends to relationship advice, our daily newsletter has everything you need to sound like a person who’s on TikTok, even if you aren’t.