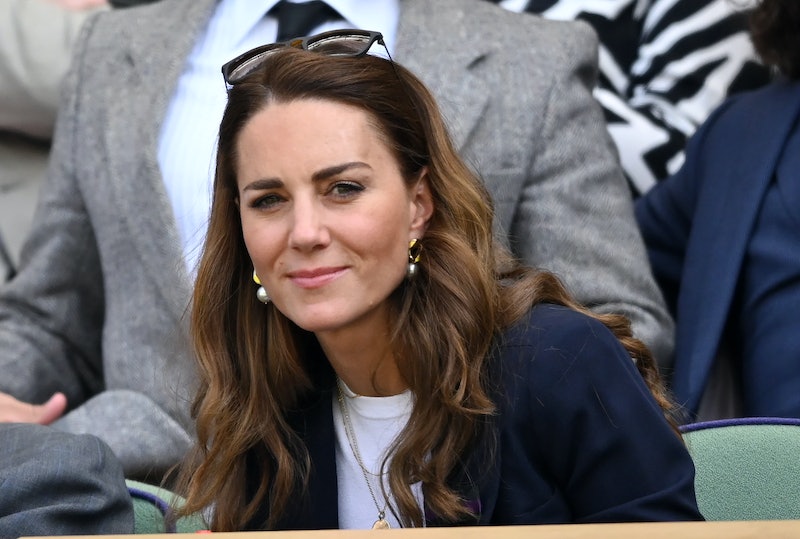 On July 5, 2021, Kensington Palace confirmed that the Duchess of Cambridge, Kate Middleton has gone into self-isolation after coming into contact with someone who tested positive for COVID-19 last week. The Palace has confirmed, however, that she “is not experiencing any symptoms.”

The duchess had been in the midst of a busy schedule of events, including a visit to Wimbledon last Friday, where the royal documented the day – including a tour of the venue – on her social media pages. However, Kate (who is said to be an avid “tennis fan”) will likely have to miss the upcoming men’s and women’s finals at the weekend.

Per the Guardian, Kate and William were also due to celebrate the NHS’ 73rd anniversary with two major events this week but will now be forced to stay home, as per government guidelines. The royal couple were planning to attend a Service of Thanksgiving at St Paul's Cathedral for the NHS, followed by hosting a Big Tea at Buckingham Palace for NHS staff, in their roles as Joint Patrons of NHS Charities Together.

Kensington Palace confirmed the news in a statement earlier today and, per the Guardian, it said: “Last week the Duchess of Cambridge came into contact with someone who has subsequently tested positive for Covid-19. Her Royal Highness is not experiencing any symptoms, but is following all relevant government guidelines and is self-isolating at home.”

It’s not the first time the royal couple have faced personal set backs because of the virus. Prince William was revealed to have contracted COVID-19 back in April 2020, but had kept his diagnosis a secret to not “alarm the nation.”

William made a full recovery and, earlier this month, came together with Prince Harry to unveil a statue of their late mother, Lady Diana Spencer, Princess of Wales, on what would have been her 60th birthday.

More like this
Meghan & Harry Respond To Jeremy Clarkson’s "Apology" Over *That* Column
By Sophie McEvoy
The Spice Girls Are Set To Reunite At King Charles III’s Coronation
By Sam Ramsden
Helena Bonham Carter Doesn't Think 'The Crown' “Should Carry On"
By Sam Ramsden
Rita Ora Finally Opened Up About Marrying Taika Waititi & Their "Perfect" Wedding
By Sophie McEvoy and Catharina Cheung
Get The Very Best Of Bustle/UK
Sign up for Bustle UK's twice-weekly newsletter, featuring the latest must-watch TV, moving personal stories, and expert advice on the hottest viral buys.