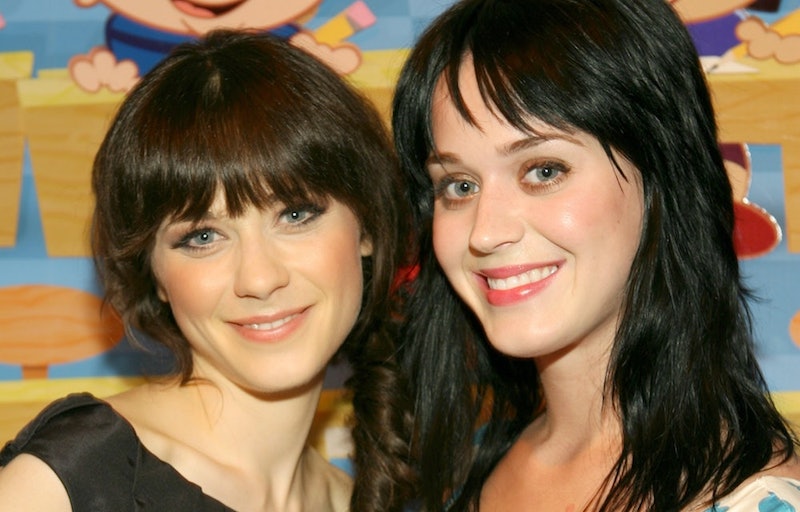 Katy Perry's extraterrestrial "Not the End of the World" music video with doppelgänger Zooey Deschanel delighted fans when it debuted on Monday, Dec. 21. And in an Instagram Live after the video's release, Perry admitted to Deschanel that she used to pose as her to get into clubs. As it turns out, the actor was well aware of Perry's past lookalike antics, revealing that people claimed to have seen her out and about at Los Angeles nightclubs she never went to.

For quite some time, blue-eyed Perry and Deschanel rocked the same brunette hair and iconic bangs. The uncanny resemblance proved advantageous for the "Fireworks" singer upon her arrival in Hollywood. "When I moved to L.A. maybe 18 years ago, I was pretty much a nobody, and you were just getting so huge at that time," Perry said. "I was so complimented to look like you, but I have to admit something to you." She continued, "I went to the club. A lot. And I wanted to get into the club, but I had no money, I had no clout, I had nothing, and sometimes I would pose as you to get into the club."

To Perry's shock and bemusement, Deschanel said that she already knew the pop star was posing as her. "People were like 'I saw you!' But I'm such a goody two-shoes, and people kept going like, 'I saw you out! I made eye contact with you!'" the New Girl star said. "Then everybody kept telling me about you, 'This girl Katy, she looks just like you,' and I'm like, 'Who is this Katy?'"

The two then recalled the various times throughout their careers that they were mistaken for each other. Perry, recalling her particularly wild times enjoying the nightclub scene, then apologized for misrepresenting her. Deschanel took it all in stride. "It's a compliment," she said with a laugh.

In the "Not the End of the World" video, Deschanel is abducted by aliens who mistake her for Perry. After several failed attempts to correct the error, the actor ends up saving Earth from destruction. The cameo proved to be a bright spot for those on Twitter. "2020 is sh*t but @katyperry putting @ZooeyDeschanel in her music video and embracing that they look alike is a highlight," one Twitter user wrote. Another fan thought they were seeing double: "I NEVER REALIZED HOW MUCH ZOOEY DESCHANEL LOOKS LIKE KATY PERRY."

More like this
Everything To Know About Taylor Swift’s 10th Studio Album, 'Midnights'
By Grace Wehniainen and Jake Viswanath
Beyoncé’s Special Tribute To Sister Solange Was Both Touching & Hilarious
By Stephanie Topacio Long
How Ghosts Inspired Kesha’s New Music
By Jake Viswanath
Lizzo Twerks While Playing James Madison's 200-Year-Old Crystal Flute Onstage
By Radhika Menon
Get Even More From Bustle — Sign Up For The Newsletter