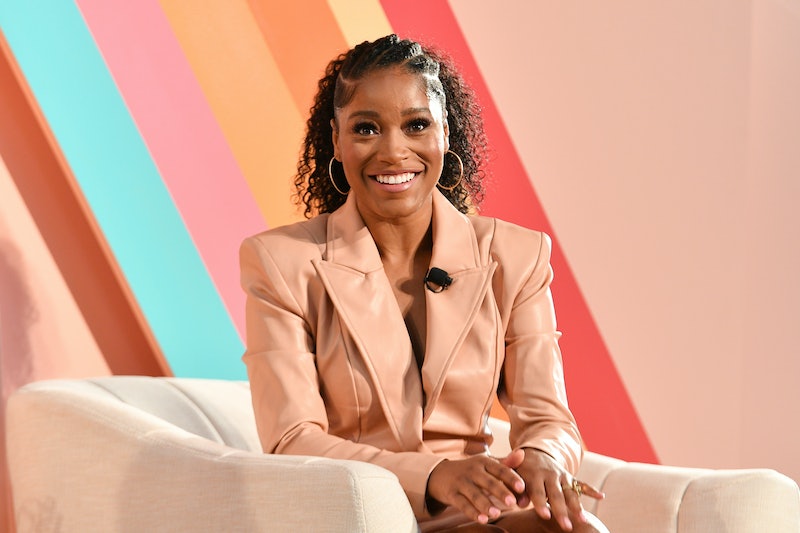 Penny Proud will have a new friend to challenge her when Keke Palmer joins The Proud Family reboot as 14-year-old activist Maya Leibowitz-Jenkins. Disney+ announced the news of Palmer's casting on Thursday, Aug. 6, just hours before the original cast is set to virtually reunite for a panel hosted by the Hustlers actor for the NAACP's Arts, Culture & Entertainment Festival. The streamer also shared a first look at the character, showing Maya raising her fist in a symbol of resistance and solidarity.

Disney+ also shared more details about Maya, who will be a newcomer to the town, on Instagram, and it sounds like she and Penny won't immediately hit it off. "She is extremely mature for her age and will not hesitate to shut anyone down with her blunt honesty and wisdom," Maya's official description reads. "The adopted daughter of mixed race parents, Maya is new to town, and initially disassociates herself from Penny and her crew because she is skeptical about what she perceives to be the superficiality of social cliques." But don't worry, Penny and Maya won't always be at odds. The description continued, "However, Penny eventually gains her hard-earned respect and the two become good friends."

Palmer's character sounds like a perfect addition to The Proud Family cast. While the 2001-2005 series was always progressive, Maya's activism will tie the show to current events in a meaningful way, while also expanding Penny's circle of friends to include a young woman who will no doubt encourage her to challenge the system even more than she already does. For her part, Palmer is more than ready to introduce Maya to the world, and she shared her excitement by tweeting, "DREAMS COME TRUE!" (The Hustlers star's casting also marks a return to the Disney family for the actor — she previously starred in the 2007 Disney Channel Original Movie Jump IN!.)

In addition to Palmer, The Proud Family reboot, titled The Proud Family: Louder and Prouder, will reunite the original voice cast including Kyla Pratt (Penny Proud), Tommy Davidson (Oscar), Paula Jai Parker (Trudy Proud), Jo Marie Payton (Suga Mama), and Cedric the Entertainer (Uncle Bobby Proud). There will be other new additions to the voice cast as well, which fans can expect to see announced at a later date. (Fingers crossed for Solange and Beyoncé to make an appearance!)

While there's no word yet on when The Proud Family: Louder and Prouder will premiere on Disney+, Palmer's casting news and the cast's reunion suggest there could be news on that front soon. In the meantime, fans can prepare for the reboot by rewatching the original series, which is streaming in its entirety on Disney+.

More like this
The 'Hocus Pocus' Sequel Finally Has A Release Date & It Makes Total Sense
By Shannon Barbour and Radhika Menon
All The Marvel Easter Eggs You May Have Missed In ‘Ms. Marvel’ So Far
By Kadin Burnett
Emma Thompson, Lashana Lynch, & Stephen Graham Lead Netflix’s 'Matilda'
By Sophie McEvoy
Here's Why You'll See Less Of Olivia Rodrigo In 'HSMTMTS' Season 3
By Bustle Editors
Get Even More From Bustle — Sign Up For The Newsletter