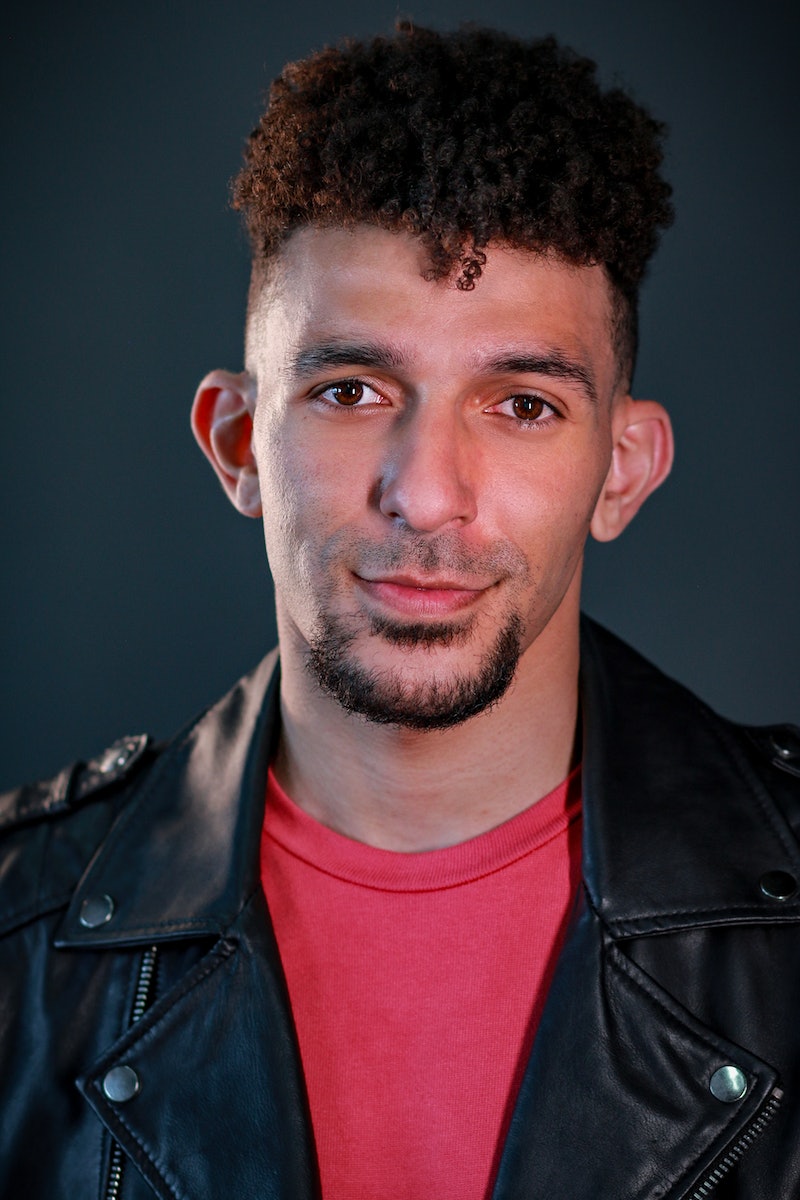 I think we may have reached peak nostalgia. Reboots of ’90s and ’00s classics like Sex and the City and Gossip Girl are dominating streaming lists. Gen Z is styling itself in crocs and trucker hats, and then capturing the evidence on disposable cameras. While this may present some challenging memories for anyone who experienced these trends first time around — “there’s some cherry picking going on,” comedian Carly Aquilino said in a viral TikTok about the era’s unusual sartorial combinations — the nostalgia can be a welcome development for the faces who defined the era. People like 32-year-old actor Khleo Thomas, who young audiences fell for as Zero in the beloved Disney film Holes, adapted from Louis Sachar’s bestselling 1998 novel.

“As an actor, I think a lot of people wish to have one role on their resume that [audiences] can forever resonate with,” Thomas tells Bustle of the 2003 film’s enduring popularity. “You’ve got someone like Harrison Ford who, no matter what, is Indiana Jones or Han Solo. You’ve got Daniel Radcliffe who, no matter what, is Harry Potter. I love that I can embrace the fact that the name Zero will be tied to my name for the rest of my life.”

In the last year, Holes has unleashed a viral TikTok sound — “I’m tired of this, grandpa / well that’s just too damn bad!” — and trended on Twitter for its unforgettable one-liners, though Thomas has built an audience of his own thanks to his quiet charisma and his ongoing work as an actor in Shameless, Roll Bounce, and Dirty. With a million followers across TikTok, Instagram, Twitter, and Twitch, Thomas does interact with his Holes stans, but his community is also interested in what’s next. Take this past Halloween, when his Twitch community raised the money he needed to film a reenactment of the “Eye to Eye” dance routine from 1995’s A Goofy Movie. “That entire budget was filled within a week and a half,” he tells Bustle. “That allowed me to hire a choreographer, hire the dancers, book the stage, book the lighting, book the crew, everything.” The resulting video was impressive and over the top, to say the least.

Below, Thomas opens up about his Holes audition, that catchy “Dig It” rap, and the time Bow Wow took him on a sold-out, 32-city music tour.

The screen test stands out because I walked into this studio, and it had all the characters’ names up. So there was Zero, there was Zigzag, there was Armpit, and then they had the actors who were coming in underneath the names. I'm looking at this list for Zero, and it's the longest list. So immediately, I'm in my own head: I'm seeing all the names that I recognize. I'm seeing Bow Wow; I'm seeing Romeo Miller; I'm seeing Taj Mowry. These are the kids I grew up watching and was a fan of.

Everyone else got to do two or three scenes of a screen test. They put everyone together to see the energy between them [and how] they fit. I only had the opportunity to do one scene that day, and it was actually with Shia [LaBeouf]. It was when he's trying to teach me how to read. The director walked up before we started and said, “You know what? Scrap the script. I just want to see you two just go for it. Just improv and see what happens.” And that's the only thing I got to do that day. About 48 hours [later] we got the call: “Hey, we would like to sign him up to bring this character to life.”

What was it like when the movie actually premiered?

It was an immediate shift for me and my family because we don't come from a lineage of actors. We had no help. There was no one telling us what to do [or] what not to do. We were just chasing the dream.

I'll never forget, I went to Disneyland ... And I hadn't seen the posters [for the movie] yet. I didn't know anything about marketing or promo or what was next for the movie. Nothing. So I'm in Downtown Disney, and [they have] the biggest [Holes] posters you can imagine. They're gigantic, and they're hanging from the rafters of this theater. I run to a payphone and I call my mom on 1-800-COLLECT and say, “You got to drive here, there's a poster with my face on it!” So she’s there in 45 minutes. Ever since that day, it's just never been the same.

There’s been renewed interest in the movie because of its popularity on TikTok, which has many users who weren’t even alive when Holes first came out. What’s it been like watching people either reconnect with this movie or see it for the first time?

It's telling that it doesn't get boring, it doesn't get old. You can put that movie on in front of the newer generation, like Gen Zers or anyone younger, and they're going to feel the exact same way we felt watching it. It's just one of those gems.

I think finding those gems in moviemaking is very hard because times change, people change. It doesn't have the same vibe; it doesn't speak to you the same way. For some reason, those characters and that story [in Holes] are forever iconic. TikTok has for sure breathed some new life into it, and I hope they continue to do it ... When I was growing up, I would have loved to be able to hit Keanu Reeves on Twitter when The Matrix came out. So when someone posts something on TikTok related to [the movie], I'm happy to embrace it and engage with it, because that's giving them that memory that I wish I had in my time.

You’ve continued to pursue acting since Holes. What was it like having such a successful movie as a teen actor and then transitioning into an adult acting career?

I hate the fact that [child acting] comes with such a negative label. I understand why though. People were expecting you to mess up. I’m not gonna lie, I feel slighted by the fact that I never had a TMZ headline. [Laughs.] I feel slighted because I'm like, “Oh, that helps with PR and marketing.” [Editor’s note: Three days after this interview was conducted, Thomas was featured in a TMZ story about Van Leeuwen’s Kraft Macaroni & Cheese ice cream collaboration.]

So because there's no headline, there's nothing attached to the name. In a sense, I may have disappeared from the limelight, but no, I've always been here. I just didn't have to fight for the spotlight. I didn't want it.

You also started leaning more into music and then gaming in recent years. What lead you to pursue those interests professionally?

Music has always been a passion. You look at Holes and you look at the theme song “Dig It.” We wrote that song and we were all in the studio together — me and everyone else featured on that record — with Doug E. Fresh. I immediately got right to work on more music as soon as we were done filming. I went on my very own promo tour for that, and then after Roll Bounce, Bow Wow picks me up ... He says, “Yo, I need you to come on this tour with me,” and I'm like, “Okay, you're asking me to remove myself from the acting world to come play with you in your world?” But I couldn't miss out on an opportunity like that; [it was] 32 arenas across America, sold out. I'll forever be grateful to him for that.

Finally I just decided to go fully independent. I got kind of tired of waiting on the music industry's gatekeepers. I went on one more run, I did my Slick Living mixtape [in 2011]. We did a Slick Living tour, and I realized at that time that all I really wanted was to be able to write a song and then hear the crowd sing it back to me. When I had a song called “Five On It” that blew up during the Vine era that took me and my team on tour — we sold out all the shows — I heard my lyrics rapped to me, and I was like, done. Mission accomplished.

Gaming has always always been there. I’m the oldest of my siblings; there are four of us, and gaming was our bonding time. I can always pinpoint a video game for every era of my life or whatever set I was on because I've always had a console with me. [While filming] Holes, I was playing Castlevania on the PS1.

Right before the pandemic kicked off, I was sitting down with Fox Soul to have my very own talk [show]. I wanted to bring back that feeling of Arsenio Hall, because I feel like we don't have that for our generation. We're getting ready to go through the pilot and then pandemic life hits. So I just love the fact that I found Twitch at the right time. I've always known that it was there, but it took until the pandemic for me to lock in focus and say, “Okay, what can I really do with a platform like this? And if I was going to do my talk show, how would I do it?”

More like this
20 Photos Of The 'Hocus Pocus' Cast Then & Now
By Radhika Menon
12 ’90s Movie References You Missed In 'Do Revenge'
By Radhika Menon
Margot Robbie Breaks Her Silence On *That* Viral 'Barbie' Moment
By Maxine Harrison
Paul Mescal, Man Of Mystery
By Samantha Leach and Heather Hazzan
Get Even More From Bustle — Sign Up For The Newsletter