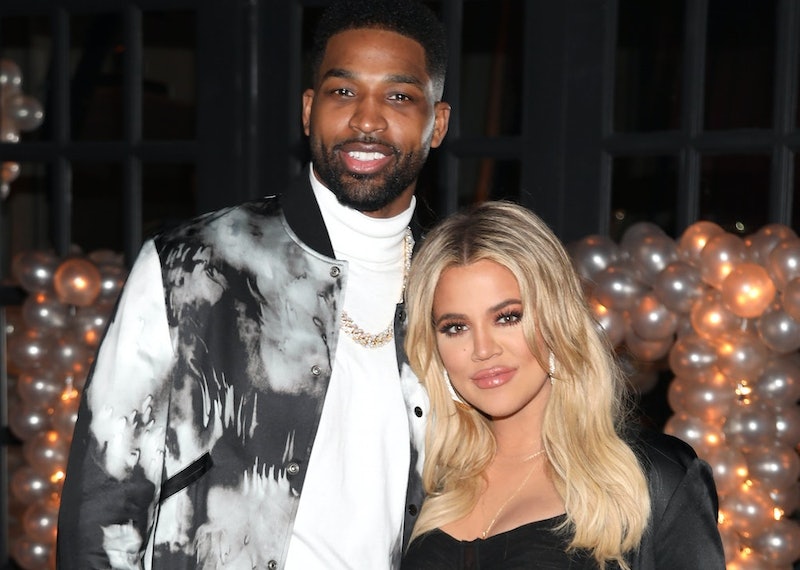 In the teary trailer for the final season of Keeping Up With the Kardashians, the Kardashian-Jenner clan prepares to bid adieu to longtime viewers. Among the many revelations detailed in the preview, which was shared by E! on Jan. 28, is that Khloé Kardashian is ready for baby no. 2 with Tristan Thompson. And if you're wondering just how serious they are about expanding their family, a source told E! News! that they've actually been trying to have another child for quite some time now.

In the preview for Season 20, set to premiere on March 18, Kardashian tells the NBA player, "I just feel like it's now time to have another kid." The clip then cuts to another segment of Kourtney Kardashian and Scott Disick, leaving viewers hanging in terms of Thompson’s response. According to E! News, however, Kardashian and Thompson are both "on the same page" and want another baby. The two currently share daughter True, 2, together, whom they welcomed in April 2018.

"Khloé knows the value of siblings and growing up in a house full of kids and she wants that for True," the source revealed. "It's something they have been working on for a while." The insider added that "Tristan is very supportive of Khloé and making this happen. He goes with her to doctor's appointments and listens to her feelings. He's very involved and invested in the future of their family together." Bustle has reached out to Kardashian's rep for comment and will update this post if we hear back.

The baby reports come after Kardashian shut down pregnancy rumors in November 2020. When the Good American founder shared her coordinated Cleopatra and Mark Antony Halloween costume with Thompson and daughter True, a Twitter user responded, "I'm still convinced @khloekardashian is going to tell us in a couple months that she's pregnant." Kardashian then clapped back, writing, "Well my abs say otherwise babe."

Kardashian and Thompson, who have been linked since 2016, reportedly got back together in July 2020 after a highly publicized cheating scandal. The latest season of KUWTK chronicled their complicated relationship as they quarantined together amid the ongoing coronavirus pandemic to co-parent True. In October 2020, Kardashian opened up about the challenge of co-parenting after such a tumultuous split while on The Ellen DeGeneres Show.

"It's one of the hardest things I think I've ever done because you have your own personal feelings," she said. "But when you can put those aside and you just put your child first. I mean, it sounds great when you're all in love and everything, but when you go through something, it's such a challenge. But to do it, I know how good I feel about it."