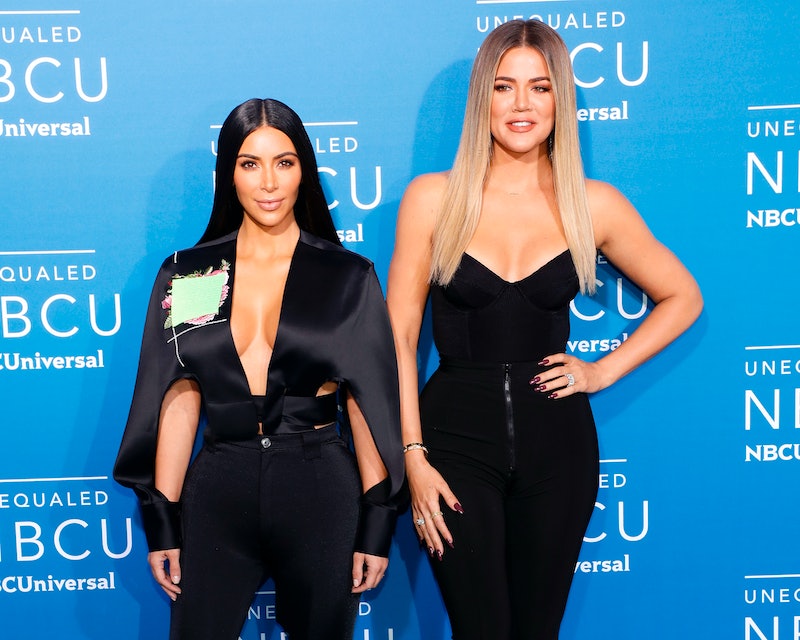 The Kardashians may not have seen all those memes about their recent private island getaway, but they do understand where a lot of the criticism is coming from. During an appearance on The Ellen DeGeneres Show, Khloé Kardashian responded to the online backlash to Kim's 40th birthday trip, explaining that the famous family did their best to handle the entire situation as safely as possible.

On Oct. 27, Kim wrote on social media that "after 2 weeks of multiple health screens and asking everyone to quarantine," she surprised her family and close friends with a trip to a private island to celebrate her birthday and "pretend things were normal." In response, Twitter was flooded with memes and posts pointing out that most people do not have the privilege of escaping to a private island in the middle of a pandemic.

Though Khloé told DeGeneres that the party was "so special," she also admitted that she understands where critics are coming from. "I did hear that people were upset that we all went out of town. I don't really know the extent of it," the Good American founder said. "But this year is a frustrating year. I get it. I think there's so many frustrations going on for everybody. But also it's her 40th [birthday]. This is something that she wanted to do for us. It was such a nice thing."

"It was such a beautiful experience and I want Kim to focus on just how beautiful it was and what she did for everybody," the reality star continued, adding that she doesn't want the online reaction to "overshadow all the greatness." She also responded to concerns that many social media users had about the famous family potentially endangering the staff who had to look after the group during the party, revealing that they were "grateful" for the tourism after months without visitors.

"So many people said that we were their first party of guests that they've had in months," the Good American founder said, explaining that the trip helped people pay their bills and take care of their families. "Just hearing those messages when we were there, we felt really good and we felt so safe," she said. "We did it in the safest way I could imagine someone doing it." Safety was a top priority for Kardashian, who recently revealed on Keeping Up With the Kardashians that she had tested positive for the novel coronavirus back in March.

"I was really, really sick," Kardashian told DeGeneres about her experience with COVID-19, adding that she was the only person in her family who caught the virus. She also revealed that the worst part of the entire experience was being quarantined away from her 2-year-old daughter, True, for over two weeks. "We had to wait until I had negative test results for me to leave. And that was the hardest part," she said. "I don't care how beautiful of a place you have, being taken away from your child for that long, because I couldn't be around my daughter, that was the most heart-wrenching thing."

During an episode of KUWTK, Kardashian recounted the symptoms she was experiencing, which included "vomiting, and shaking, and hot and the cold [flashes]," as well as a headache that she explained was more intense than anything she had previously experienced. "It was really bad for a couple days," she said. "The coughing, my chest would burn when I would cough, and my throat is still not fully recovered. Let me tell you, that sh*t is real."

More like this
North West Will Make Her Acting Debut Alongside Mom Kim Kardashian
By Radhika Menon
Everything You Need To Know About Kanye's Post-Kardashian Dating Life
By Bustle Editors
Did Pete Davidson Remove His Kim Kardashian Tattoos? Photos Point To Yes
By Alyssa Lapid
Kim Kardashian's Destroyed Flare Jeans Are Straight Out Of 2017
By Alyssa Lapid
Get Even More From Bustle — Sign Up For The Newsletter
From hair trends to relationship advice, our daily newsletter has everything you need to sound like a person who’s on TikTok, even if you aren’t.