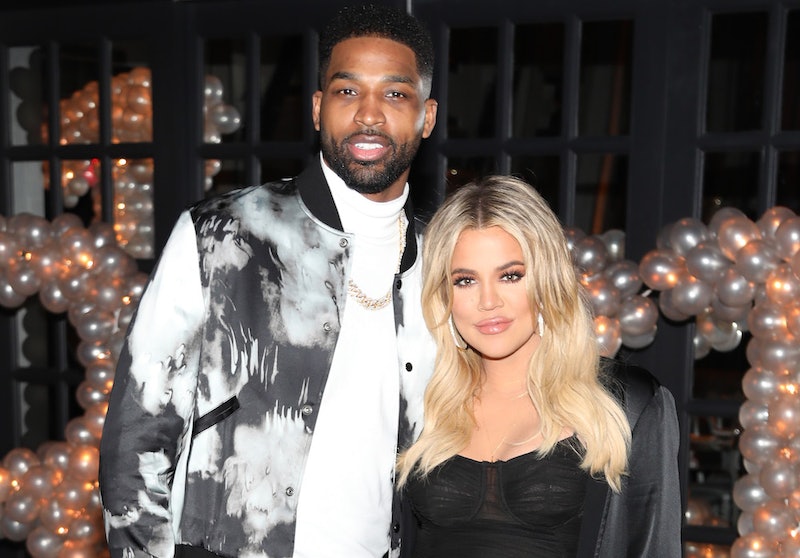 Joking about past infidelity might seem like an unconventional approach to relationships, but it seems that Khloé Kardashian and Tristan Thompson have done just that. On the Nov. 5 episode of Keeping Up With The Kardashians, Khloé praised Thompson for looking after their two-year-old daughter while she was in quarantine following a positive COVID-19 diagnosis. Once she tested negative, the reality star reunited with her family — and casually quipped about Thompson's history of cheating.

To recap, Kardashian created a quarantine companion during her time in solitude: a massage pillow with sunglasses that she named Quarantina. "Oh lord. If you ever need a friend to talk to, I'll stand outside your window downstairs," Thompson said. "You know back in the day when guys would throw rocks at girls' windows to talk to them? I could always do that."

Throwing rocks wasn't Thompson's only suggestion. When Kardashian recovered, the NBA star requested that she try on Quarantina's glasses herself. "Aw, you look like the smart girl I'm going to cheat off on the test," he said. "Thank God you said, 'On a test'," the Good American founder responded.

Earlier in the episode, Khloé expressed her gratitude for Thompson's support during such a difficult time. "I'm so thankful that Tristan's been here to help me take care of True," she said. "He'll make me some food and leave it outside my door. Even though we're not together, we're just really good friends, and I'm really, really grateful for that."

Despite appearing to rebuild their friendship, a source told People in July that Kardashian and Thompson are "giving their relationship another try" following their highly publicized split in February 2019. The pair called it quits when reports surfaced that Thompson cheated on Kardashian with Kylie Jenner's former best friend Jordyn Woods. However, it seems the coronavirus pandemic may have brought them back together. The two have since been quarantining in the same house, and in a promo for the current season of KUWTK, it was teased that they would rekindle their romance.

"One of my fears is you're acting like this until you get what you want and then if you do, you're going to turn into the old Tristan again," she said to Thompson in the teaser. He responded in another clip, "I know what I want in my life and I know I want you in my life."