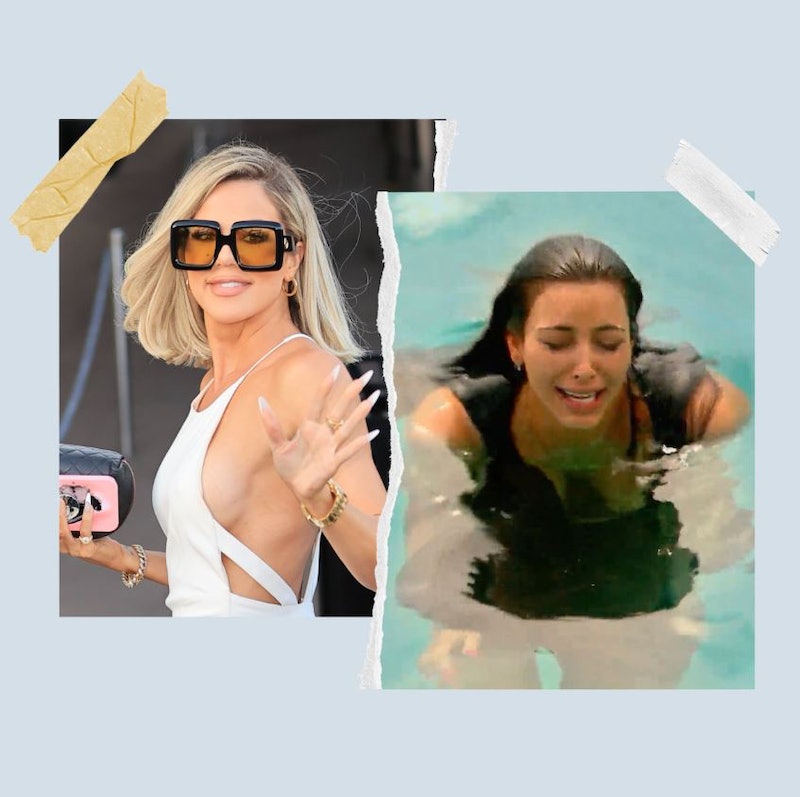 From “You’re doing amazing, sweetie!” to “Your sister’s going to jail,” Keeping Up with the Kardashians delivered countless quotable moments in its 14-year run. Of course, few exchanges will ever be quite as iconic as Kim Kardashian’s Bora Bora earring saga. During one infamous 2011 episode, then-boyfriend Kris Humphries tossed Kim into the shimmering ocean — only for her to lose her $75,000 diamond earring in the water. She was so distraught about the missing gem that Kourtney Kardashian had to deliver a reality check in a way that only Kourtney could: “Kim, there’s people that are dying,” she reminded her sobbing sister.

The moment went on to become a pivotal part of Kardashian canon — so much so, that the little (er, really big and expensive) diamond is still making waves more than a decade later. In a July 10 Instagram post, Khloé Kardashian referenced the missing jewelry in a snap with Kim, as the pair twinned in black bikinis in similarly stunning water. “We are still looking for that damn diamond,” Khloé wrote, tagging the post #KampKoko, a reference to the destination for Khloé’s continued 38th birthday festivities. It’s not clear if they’re literally in Bora Bora, or somewhere else just as beautiful — but either way, the reference couldn’t be clearer (or better).

In case you need a refresher, Kim’s diamond earring was ultimately recovered — by budding snorkeler Kylie Jenner, no less. She retrieved the jewelry for her sister mere moments after it was lost, and later recalled the harrowing mission to BuzzFeed. “It was pretty deep, but there [weren’t] a lot of waves and Kim kind of, like, threw a tantrum immediately when she found out that she lost it,” Jenner said in 2017. “And I was like, ‘No, this is fine.’ I went under there and it was saltwater so it kind of hurt to open my eyes, but I just opened my eyes and looked around and I saw something shining. Swam all the way down there — it was, like, 10 feet — picked it up, and it was the shining diamond! I literally found it in two minutes.”

A decade-plus after the diamond debacle, and the Kardashian family vacation looks as dreamy as ever — with the addition of a few new family members, of course. (Back in 2011, Mason Disick was the only grandchild in the brood!)

Now, as Kim and Khloé’s Instagram pictures prove, there are even more kids to share in the fun — and, surely, in the diamond-diving whenever necessary.