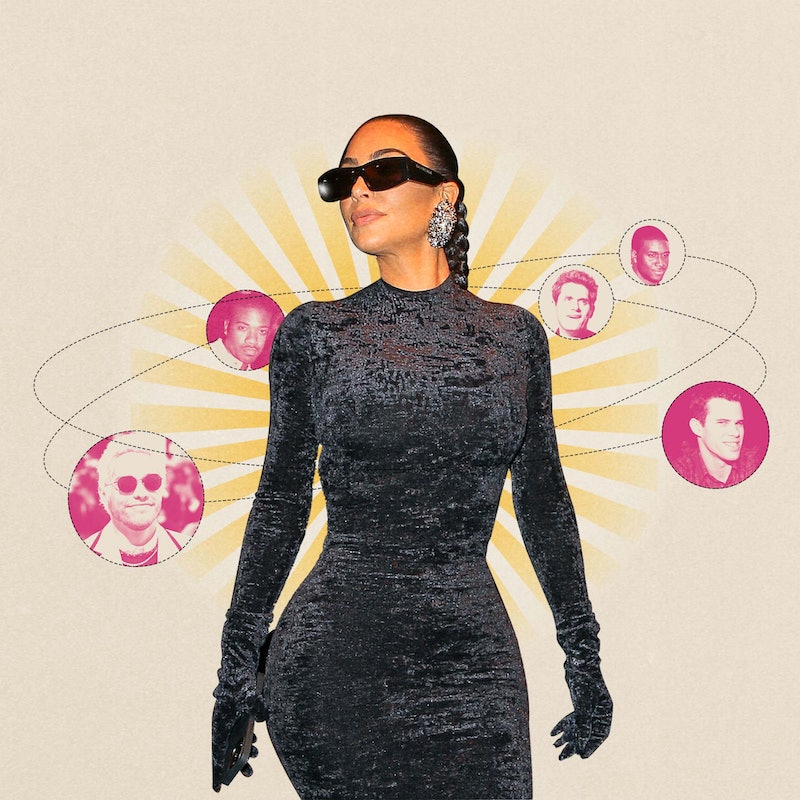 Let me set the scene. An up-and-coming Kim Kardashian is moving on from ex Ray J by keeping busy dating one of Hollywood’s biggest playboys, Nick Cannon. Her friend Paris Hilton, meanwhile, is making questionable choices on a reality TV show documenting her life. The year of this historic sequence of events was 2006, but you’d be forgiven if you thought it was 2021, because the circumstances are remarkably similar. Kim Kardashian, now West, is coming down from a salacious divorce from Kanye West, keeping busy dating Hollywood’s latest playboy Pete Davidson. And Paris is In Love, according to her latest reality show on Peacock. The more things change, the more they stay the same.

But today our focus is on Kim’s return to her enviably chaotic dating roots. After being wifed up for almost a decade while raising four children and building literal billion-dollar empires with West, Kardashian West filed for divorce in February 2021. And, in a turn that absolutely no one expected, Kimberly started dating again — something we hadn’t seen since she wore belts around her waist, gladiator sandals, and a swoop bang. Since those days, the world has changed drastically — Kim’s studying to be a lawyer, she’s a devoted mom and businesswoman — but her instincts in men have seemingly remained static.

When her divorce was first announced, Kimberly Noel was linked in the tabloids to the likes of CNN reporter Van Jones and musician Maluma. While she quickly shut down those rumors, claiming she was concentrating on her family over dating, that made the anticipation of who’d she date next all the more thrilling. Gone, we thought, were the days of the Ray Js, the Nick Lacheys, the John Mayers, the Kris Humphries. This Kimberly has grown, we thought, and in addition to being out of the chaos that is dating in your 20s (and 30s! Somebody say “Amen!”) she’s a billionaire. Surely, Kim would now choose to date someone closer to the Van Joneses of the world?

Alas not, because Kim has fallen victim to none other than Pete Davidson. That’s not to suggest the comedian and Saturday Night Live performer is bad, he’s just different than the type we expected to see in her future. For one, he’s still in his 20s while Kim is in her 40s. He only moved out of his mom’s basement this year while she owns her own multi-million dollar home where she raises her kids. It’s a basic difference in lifestyle, and aside from his talents on screen, he’s mostly known for possessing BDE, or Big Dick Energy.

Perhaps for Kim, this pairing is a return to normalcy and a reminder of a simpler life, when she was better known for dating Brandy’s brother and appearing as Paris Hilton’s assistant on, well, The Simple Life.

Pete, also a prolific dater like Kim once was, has spent the last few years splashing around the celebrity dating pool, coupling up with Ariana Grande and Kate Beckinsale and Cazzie David and Phoebe Dynevor. He’s practically terrorized Hollywood with his BDE, and someone we thought was above getting dickmatized by the latest Hollywood heartthrob was Kim. She’s literally been there, and done exactly that.

And yet there’s something truly inspired about this unapologetic display of regression (something that her sister Kourtney knows plenty about). I mean, to be honest, they both look really happy and like they’re having a great time! Good for them! Is Pete Kris’s Corey Gamble? Maybe. Or perhaps for Kim, this pairing is a return to normalcy and a reminder of a simpler life, when she was better known for dating Brandy’s brother and appearing as Paris Hilton’s assistant on, well, The Simple Life. Or maybe it’s, as some fans have theorized online, a publicity stunt concocted by the iconic momager Kris Jenner (you’re doing amazing, Kris).

Either way, the main takeaway is this: single Kim can — and will — steal your man. It’s 2021, and Hollywood’s reigning It Girl is officially back.

More like this
Kim Kardashian Reacts To Kanye West’s Diss Song “Eazy” On 'The Kardashians'
By Jake Viswanath
Becca Tilley Confirmed Her & Hayley Kiyoko’s 4-Year Romance With A Heartfelt Note
By Brad Witter
G Flip Shared How They Got Romantic With Chrishell Stause & Discussed Babies
By Brad Witter
Becky G Once Had A Fear Of Speaking Spanish. Now She's Topping The Latin Charts.
By Tess Garcia
Get Even More From Bustle — Sign Up For The Newsletter