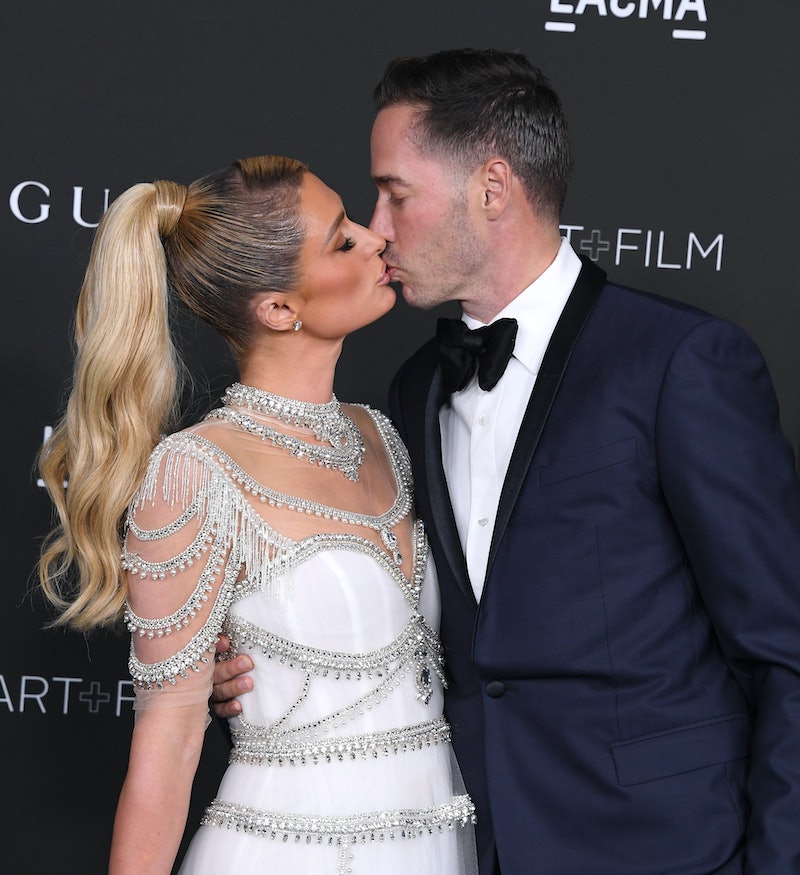 No one knows how to throw a party better than Paris Hilton. And ahead of her wedding to Carter Reum, she decided to give viewers an in-depth look at all the planning that went into the big day. Premiering on Nov. 11 and releasing new episodes weekly, Peacock’s 13-part docuseries Paris in Love will chronicle everything from Hilton’s search for the perfect dress to her struggles booking a venue while dealing with overbearing family members.

“As you can imagine, marrying Paris Hilton is quite different than I expected,” Reum, who proposed to Hilton in February, says in the Paris In Love trailer. One of the challenges that Hilton and her venture capitalist fiancé will encounter on the show is her mother Kathy Hilton, who takes a hands-on role in the preparations. “He just needs to stay in his lane,” the Real Housewives of Beverly Hills star warns of her future son-in-law.

Now that the series and celebration is finally here, here are all the details to know about the wedding.

Hilton and Reum wed on Nov. 11 — the same day Paris in Love premiered — as part of a multi-day celebration. “It’s gonna be, like, a three-day affair. We have a lot happening,” Hilton said on The Tonight Show. Although earlier reports suggested Hilton and Reum’s ceremony would take place at Beverly Hills’ Good Shepherd Church, Page Six reported on Nov. 4 that the couple made a last-minute change and decided to marry at her late grandfather Barron Hilton’s Bel-Air estate, which also reportedly served as the reception venue.

Guest Caroline D'Amore, who stars on The Hills: New Beginnings, revealed on talkshoplive that she needs “like five outfits” to attend the event, including a mandatory all-neon ensemble for a wedding day carnival the couple is hosting. Don’t expect to see Hilton behind the turntables at any point, though. “I think for my wedding I’m going to be so stressed out that I probably will have other people DJing,” she said at The Wall Street Journal's The Future of Everything Festival in May. “I got a lot of my friends calling me saying, ‘I want to DJ your wedding.’ So I have a whole list of people who want to do it. So I think I’ll take the night off that night and just be the bride.”

The guests won’t be the only ones doing a costume change. In a recent Instagram Live, Hilton revealed that she plans to wear a total of 11 wedding gowns in honor of her 11/11 wedding date. “I love outfit changes,” she said on The Tonight Show, joking that Reum will likely stick to one look because “he’s not as high-maintenance as I am.”

There has been speculation that one of Hilton’s wedding dresses was designed by either Valentino or Oscar de la Renta. Her rep denied that she would wear Valentino, but Hilton was spotted at a New York City Valentino store on Nov. 3 with her sister Nicky, who wore the designer for her own wedding to James Rothschild in 2015.

“She flew to New York for 10 hours, tried on her dress — I can’t say who — and was crying tears of joy, so happy with it,” Kathy Hilton told Extra the following day. She added during a Daily Blast Live interview that she’s incorporating her own secret detail into the dress Hilton walks down the aisle in. “You know how you are supposed to have something old? I am having something sewn into her wedding dress that's going to be a big surprise,” she said. “I can’t tell you yet, but it’s going to be very special.”

On Nov. 11, Hilton gave a glimpse at her wedding gown, which was indeed designed by Oscar de la Renta, on Instagram and wrote, “My forever begins today.”

Hilton recently confirmed that she invited Kim Kardashian, though it’s unclear if the Skims co-founder attended. One insider previously told Page Six that Kardashian “will be there solo” and had no plans to bring her rumored new fling, Pete Davidson. It’s worth noting, however, that close Kardashian-Jenner friend Simon Huck reportedly got married in Los Angeles the same night.

Judging by photos obtained by Page Six, celebs like Emma Roberts, Paula Abdul, Rachel Zoe attended the ceremony. Among the attendees at Hilton’s Alice in Wonderland-themed bridal shower who also might’ve attended the wedding are D’Amore, Kris Jenner, Sofia Richie, Rachel Zoe, Gigi Gorgeous, Elisha Cuthbert, Nicole Williams English, Jasmine Sanders, and Jocelyn Chew, as well as Hilton’s aunt Kyle and her fellow Real Housewives of Beverly Hills costars Garcelle Beauvais, Crystal Kung Minkoff, Dorit Kemsley, and Lisa Rinna. Kathy noted in the Paris in Love trailer that Hilton and Reum would need to invite about 75 of her friends because, as she said, “This is, like, my wedding too.”

The couple’s Gearys Beverly Hills registry contains more than $60,000 worth of gifts. Guests can choose from everything from an almost $5,000 Baccarat vase to various pieces of Hermès china.

The couple has yet to reveal their wedding bands, but Hilton’s engagement ring, which was designed by French jeweler Louis Cartier’s great-great-grandson Jean Dousset, includes an emerald-cut diamond flanked with multiple smaller diamonds and inscribed inside with a "P" and a sapphire. Hilton also revealed that the sparkler was “inspired by the Grand Palais in Paris.”