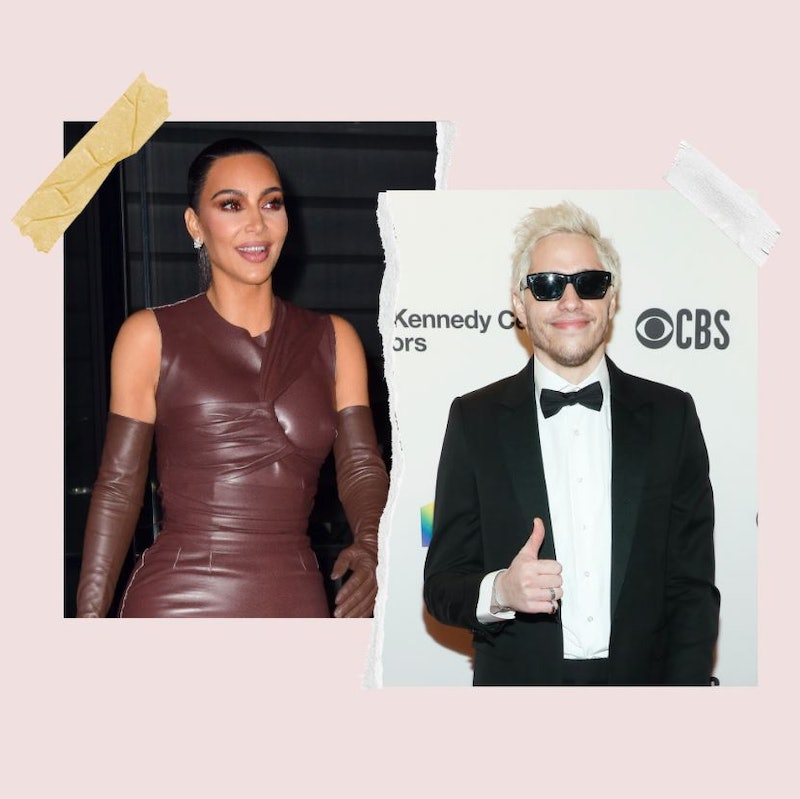 Well, that’s awkward. After Kim Kardashian made her relationship with Pete Davidson Instagram official on Friday, March 11, fans noticed something familiar in the photos: She was wearing the $23,000 Balenciaga coat that ex-husband Kanye “Ye” West said he bought for her ahead of her October Saturday Night Live hosting debut. Attempting to decipher whether the detail was coincidental or if the reality star was throwing sartorial shade at her ex, Twitter users were entertained, nonetheless.

While one person wrote that they were “dead” seeing “Kim going insta official with Pete in the coat Kanye bought for her,” another simply tried to make sense of “why that’s so funny” to them. “Knowing that Ye gifted Kim the Balenciaga Coat (right before her SNL gig) that she wore in her post with Pete [is] f*ckin hilarious,” another fan tweeted amid West’s attacks against the SNL star.

After Kardashian first wore the fake metallic fur in October, and again for an early Valentine’s Day dinner with Davidson, West claimed he’d gifted her the coat, in a since-deleted Instagram caption. “I BOUGHT THIS COAT FOR KIM BEFORE SNL I THOUGHT IT WAS PARTICULARLY SPECIAL I HAVE FAITH THAT WE‘LL BE BACK TOGETHER,” Ye wrote in February, per The Daily Mail’s screenshot.

Amid West’s recent public attacks, Kardashian, whom a judge recently declared legally single more than a year after she filed for divorce, said she would never return fire. “Being in the public eye and having disagreements publicly is never easy,” Kardashian explained to Variety. “But I do believe in handling it all privately. I believe in championing publicly and criticizing privately. I don’t think I would ever criticize the father of my children on my TV show. That’s just not really what I’m about, and I just don’t think that would ever make me feel good.”

The Skims co-founder went on to share that she’s “always really respectful” of what her four children with West — North, 8, Saint, 6, Chicago, 4, and Psalm, 2 — see: “The reality is, we’re always a family. We always will have a love and respect for each other.”

Despite Kardashian and Davidson’s most recent relationship milestone, they’ve yet to film together for her upcoming Hulu series, The Kardashians. “I’m not opposed to it. It’s just not what he does,” she added in her Variety interview, teasing that viewers can still expect to see “how we met and who reached out to who and how it happened and all the details that everyone wants to know.” Kardashian also “might film something really exciting” soon that includes Davidson — who called her his girlfriend for the first time last month — but added that it wouldn’t air during Season 1.

In the meantime, Kardashian’s friends and family are supporting the couple, and loved seeing them make their relationship Instagram official after they first sparked dating rumors in October. In the snaps, which Kardashian captioned, “Whose car are we gonna take?!” — a line from Ben Affleck’s 2010 movie The Town — the pair playfully made kissing faces, and in one, Davidson even laid in his girlfriend’s lap while smoking. “I love this,” sister Khloé Kardashian commented, while close family friend Simon Huck chimed in, “There he is!” Other famous commenters included Paris Hilton, Lala Anthony, and Scott Disick.

A source recently told E! that the Keeping Up With the Kardashians alum has felt “a huge sense of relief now that she has been declared legally single,” and is “very happy” with Davidson. “She hopes the rest of the divorce process will be amicable and her and Kanye will be able to get through it peacefully,” the insider added.

Only time will tell if that changes once West spots his gift on his ex’s IG, though.