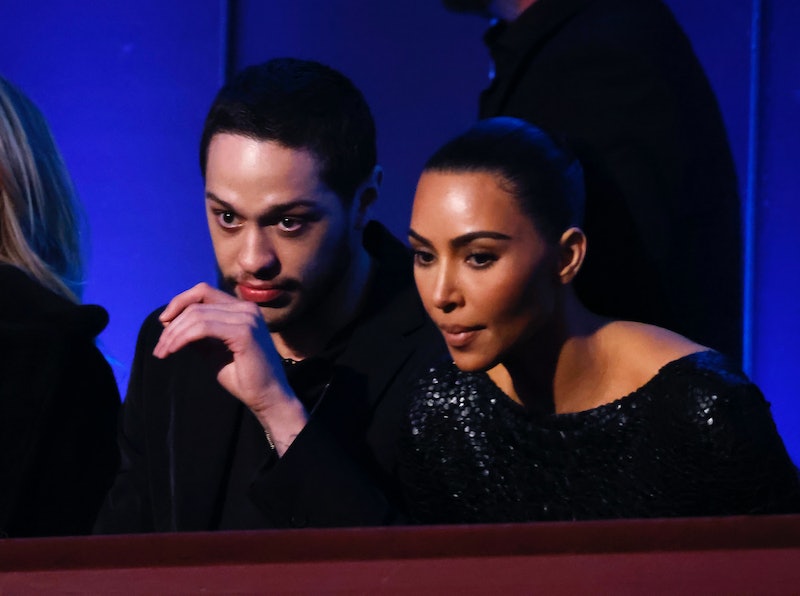 Kim Kardashian wants you to know one thing: She doesn’t photoshop her Instagram photos — well, most of them. On April 27, Kardashian called out a slew of false photoshop accusations involving her body parts and boyfriend Pete Davidson via her Instagram Story. However, she did admit to photoshopping one Instagram post that everyone caught. It started on April 24, when Kardashian shared poolside photos of her sporting high-waisted underwear under baggy black sweats. Some commenters alleged that she edited her belly button out of the pictures, causing her to put her accusers on blast on her Instagram Story.

“Come on guys... Seriously! This is so dumb,” she wrote atop a screenshot of a media report of the speculation. “Claiming I photoshopped out my belly button???” Like a true businesswoman, she turned the drama into an ad for her Skims shapewear brand in her following post. “Belly button insecurities?!” she wrote. “Well… why don’t you head on over to skims.com to conceal that saggy belly button of yours with a great pair of high waisted underwear like I did! You’re welcome!!!”

When Kardashian realized how some fans loved that she called out her critics, she decided to keep going. The KKW Beauty owner posted a Page Six article on her Instagram Story alleging that she photoshopped Davidson’s nose and jawline in their first Instagram post as a couple. “Hmm. I guess Pete’s jawline is snatched!!!!” she wrote. “Snatched to the point u guys thought I photoshopped it!!!” While she did use a “grainy filter,” she went on to provide video proof that Davidson’s face wasn’t edited, writing, “How do you photoshop a live photo? Asking for a friend.”

After calling out false accusations, Kardashian confessed to one major photoshop fail: she did indeed photoshop her niece True Thompson into her daughter Chicago’s Disneyland photos in a December post, as many had speculated. The reality star shared a screenshot of an article about the viral TikTok video exposing the blunder, writing, “Ugh this one needs some serious explaining.”

She confirmed that Kylie Jenner’s daughter Stormi was in the original pictures, but Jenner “wasn’t really feeling posting at the moment and so I respect that.” However, Chicago’s outfit perfectly lined up with her carefully curated Instagram feed and she was determined to post them no matter what. “My IG feed is pink and blue lately. Isn’t it so cute and well planned out!” she asked. Therefore, True came to the rescue. “You know how much a good aesthetic means to my soul, and I will be damned if Kylie will ruin that for me and mess up my IG grid,” she wrote. “I didn’t think it would be that big of a deal if her own mom questioned if I snuck her to a Disneyland for the first time.”