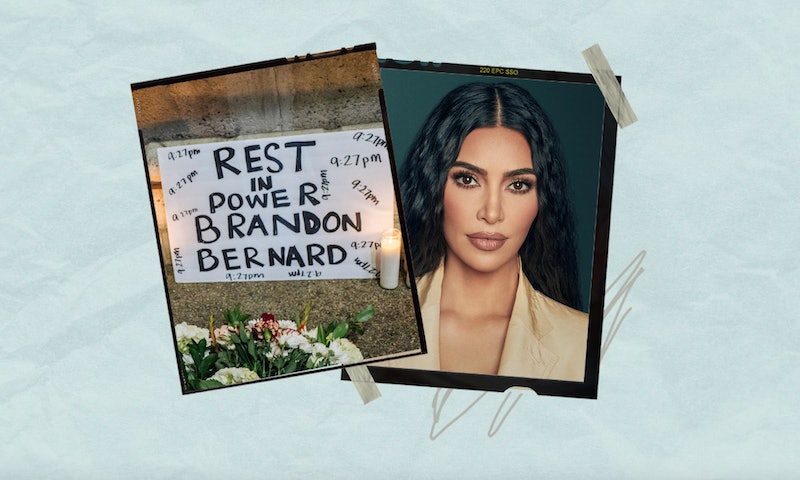 Kim Kardashian isn’t trying to become a lawyer for the clout — her prison reform work has freed 17 people so far and been commended by fans and activists alike. But sadly, her attempts at freeing people don’t always have a happy ending. On the May 19 episode of Hulu’s The Kardashians, the Skims owner recalled her last words to 40-year-old Brandon Bernard, who was convicted and sentenced to death for the murder, robbery, and kidnapping of Todd and Stacie Bagley in December 2000, when he was 18 years old. “I got to know him pretty well in his last few days, and I posted it all on social media because he really wanted me to share his story,” she explained. “But sometimes, we’re able to stop it and sometimes we’re not.”

Bernard was executed by lethal injection on Dec. 10, 2020, despite a national outcry for President Donald Trump to commute his sentence during his final days in office. In the episode, Kardashian revealed she was his last call, and a flashback showed what he told her. “First thing they gonna do is put me in that chair and try to, you know, push me around, and I don’t want to be panicking and stuff so they are going to give me some kind of shot,” he said. “But, you don’t gotta be sad.”

Listening to him, Kardashian started crying. “I couldn’t hold it in, and the fact that he was calming me down from crying really broke my heart,” she recalled in a confessional. “This is why I do what I do, because the system is so broken. I think my goal is just sharing the process so that people can see what our system is really like and how inhumane the death penalty really is. I have to fight harder to make sure this doesn’t happen to someone else.”

Kardashian tweeted many times about Bernard’s situation up until his final hour.

The death of Bernard truly motivated Kardashian to make sure that Julius Jones didn’t meet the same fate. Jones was on death row for 20 years and scheduled to be executed on Nov. 18, 2021 after being convicted for a 1999 murder he insists he did not commit. “I think what got to me is that he was hanging out with his friends, there’s a lot of evidence that his co-defendant planted evidence and pled guilty and got a lesser charge,” Kardashian explained. “I always try to think of a case and think about, ‘What would I do if this was my son?’”

On Nov. 18, the governor of Oklahoma commuted Jones’ sentence just hours before he was scheduled to be executed, assigning him a life sentence without the possibility of parole. While this means that Jones can now visit and hug his family like a normal inmate, it also denies him any path to a release from prison, but Kardashian is now fighting to free him entirely. “Imagine an innocent man stuck in prison for life without the possibility of parole,” she said. “Julius has not even been able to hug his mother for 20 years, so the fact that he’s going to be reunited with his family and physically touch them must be such an amazing feeling for a mother.”