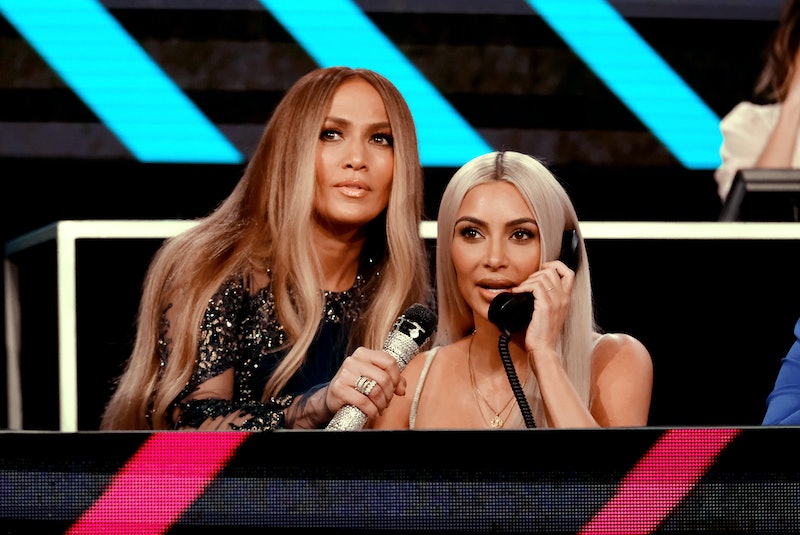 Kim Kardashian is as here for Bennifer 2.0 as you are. Shortly after Jennifer Lopez and Ben Affleck made their first joint red carpet appearance in over 15 years, the Skims founder showed her support by sharing a loving photo of the newly reunited couple at the 2021 Venice International Film Festival in a Friday, Sept. 10 Instagram story. The image she chose showed the pair at the premiere of The Last Duel, a smiling Lopez (wearing a white mermaid-style Georges Hobeika gown) staring into the eyes of a Dolce & Gabbana-clad Affleck, who had his arm wrapped tightly around the singer’s waist.

As for how Kardashian fits into the picture, Lopez’s ex-fiancé Alex Rodriguez explained to People in November 2019 that the women have known each other “for a long time” and are “very very close.” The former baseball pro, who’s attended Kardashian’s famous Christmas Eve parties with his ex, added that Lopez has mentored the reality star “a lot” over the years. “They mentor each other and they have this really beautiful relationship that goes back over a decade and a half,” Rodriguez added.

Kardashian, for her part, gushed about her and Lopez’s friendship in a December 2018 Instagram post. “My inspiration for everything has always been Jennifer Lopez,” she shared in the video. “I would always try to see what shoes she’d wear, what makeup, what hair ... I, like, became obsessed with glam because of Jennifer.” And apparently “dreams do come true” because the women became friends and visited each other’s homes.

“If you would have said to me 10 years ago, ‘Jennifer Lopez is coming over for your house to watch a movie and to have dinner’ ... I never would have imagined this would have been my life,” Kardashian added in 2018, before Lopez entered the frame to hug her.

It’s no wonder that the Keeping Up With the Kardashians vet gave her seal of approval, given how close Lopez and Affleck seem to have gotten since reportedly reuniting romantically in May. In recent weeks, the pair has been spotted all over the globe, doing everything from yachting off Saint-Tropez, to taking a cozy stroll in the Hamptons, to having an intimate sushi date in Malibu. While promoting Affleck’s new medieval Ridley Scott movie in Venice, they weren’t shy about kissing for photographers, either.

“They both have a busy fall coming up and enjoy spending as much time together as possible now,” a source recently told People. “Jennifer is very happy that she is able to join Ben in Venice. She is excited to be by his side and to support him. She loves the movie. They are still very happy together.”

And friends like Kardashian seem to be very happy they’re together, too.