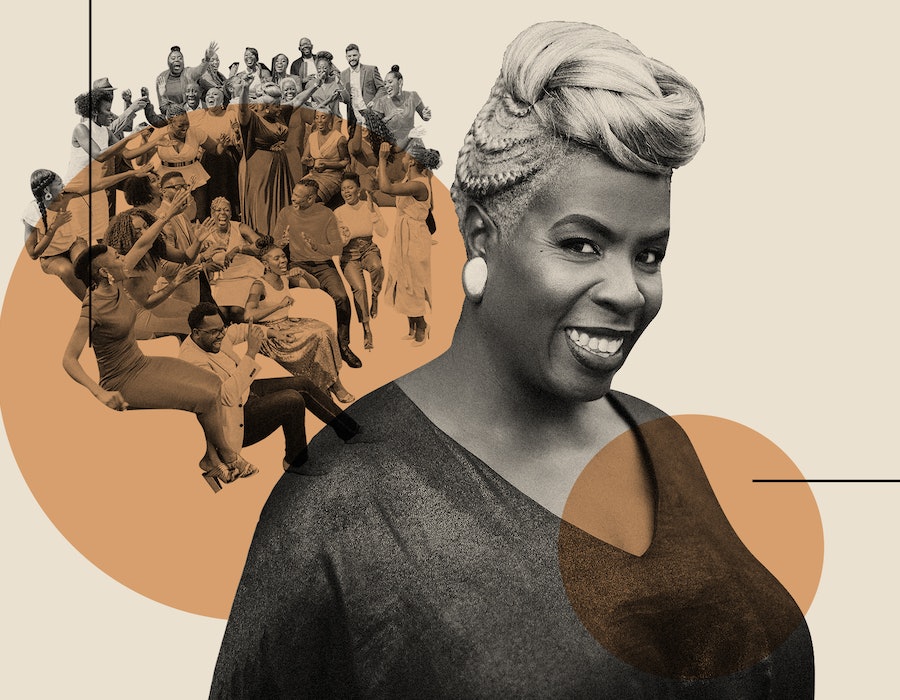 Though that wasn’t exactly how we felt in May 2018, at the wedding of Prince Harry and Meghan Markle. Although, to be honest, we just thought we were going to have a nice day out. We thought it might cause a little bit of a ruffle – a Black gospel choir at a royal wedding – and then we thought it would die down. We didn’t imagine that life would never be the same again.

Performing at the royal wedding definitely changed a lot for us. A lady who used to sing with us about 12 years ago happened to be good friends with a member of Prince Charles’ staff; she called me out of the blue, and said, “Karen, you’re going to get a call, I can’t tell you what it's about, but it's big.” That’s all she said. I didn’t get a second call for a good few days. Being in the music industry you get used to things falling through, so I thought it wasn’t going to happen. Then I got the call on the bus. I was so shocked. I didn’t see it coming at all.

[Prince Harry and Meghan] requested Stand By Me, and while it wasn’t my decision, I was happy for us to sing it. Everyone knows the song, particularly Ben E. King’s version, so usually we would’ve taken it up from there, with more rhythm, in a more percussive style. However, they said, “Can we have ‘less beat’ please?” Which I took to mean a more pared down, stripped back version.

We were really off the mark at first. They wanted it very, very pared down, which was quite hard. So much so that it took us 12 versions to get right. In the end, we went down to Kensington Palace to meet the couple themselves. I took some singers and a keyboard player with me, and we went through the song. I just said, “Alright, Paul, you do this. So-and-so, do this. When this bit comes, we do ‘oohs’ and ‘aahs’.” It really was very basic, but as soon as Paul opened his mouth to sing, it was like something shifted in the air. You could feel the obvious, palpable joy of the couple. When we finished singing that version, I felt like: “Yes. This is the one.”

It was quite strange when we came to the performance, as gospel is usually so passionate, this felt sort of restrained in comparison. There was no clapping, no dancing, everyone holding themselves still. It was only in the aftermath of the wedding that we realised the extent of what it meant to other people.

We'd get stopped in the street by people saying thank you, particularly myself because I'm very recognisable with my hair. I'm always clear that the wedding included people from all communities, of all colours, but I feel that the people of colour really took ownership and felt included. Someone once stopped me to say that they felt like it was our wedding.

I feel that gospel music enables people to access the spirit. Even if you are not a believer, people are moved by the music. I have taught people who are Muslim, people who are Buddhists, I’ve even taught witches who love gospel music. And there's something about the spirit of it that keeps people coming back week after week. Black or white, people of faith, people of no faith, old or young.

I have seen the power of gospel music to change people's lives. I've had teachers write to me to say singing gospel, even for just one hour a week, has saved the lives of quite a few young people who were going down the wrong path. It's very spiritual music, obviously, but it’s able to reach outside the church and religious boundaries to be completely inclusive. That's the power of music. It's a community, it's sharing.

One of the most powerful images I remember seeing at the beginning of the lockdown, was people in Italy, standing on their balconies and singing to each other. It showed me that music is really what keeps us going. When people can't hold on to or control anything else, they always have music; it grounds us. It is about community, and for me that’s been a really important lesson.

The Kingdom Choir normally meets once a week, on a Wednesday, which we now do virtually. We don’t rehearse because of the time lag when it comes to video calls, but we have been making a lot of virtual videos together. It has been tricky to stay motivated, but the weekly meet ups and getting together to make music has been helpful. We sang for One World: Together At Home, the concert curated by Lady Gaga and Global Citizen, and we also sang at Ascot recently.

I've always known music is important, of course, but I didn’t realise people’s need for music was quite so profound. That’s partly why we decided to release our single, Real Love. We thought: “What can we do to make people feel better? What can we do to lift people's spirits? Why don't we release a single – and further, why don't we donate the proceeds to charity?

We actually wrote the single some time ago, but produced the video during lockdown, which was quite a mission. We have amazing visual and audio editors who helped us to put everything together. Before COVID-19, we had been talking about the groups that we would want to support, and domestic violence charity Refuge was one of them.

I'm very proud of it – we just wanted it to be filled with joy, because we’re all in this together.

As told to Orla Pentelow. This interview has been condensed and edited for clarity.