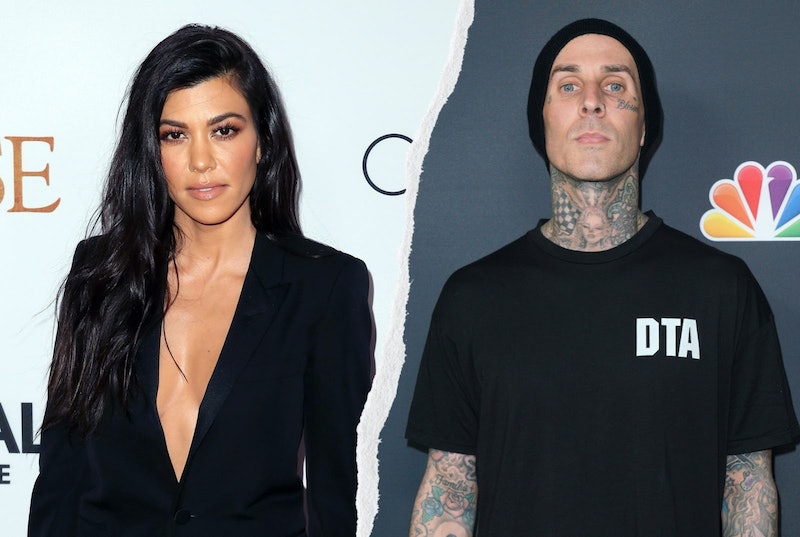 Kourtney Kardashian and Travis Barker have only been dating for a few months, but new reports suggest that their relationship is more serious than anyone thought. According to Entertainment Tonight, the 42-year-old reality star and the 45-year-old Blink-182 drummer have already talked about possibly tying the knot. And although things are moving quickly, this does feel like the obvious next step following the couple’s PDA-filled desert vacation in late April.

“Kourtney and Travis are in love and have talked about their future and the possibility of getting engaged and married,” a source told ET on Tuesday, May 4. “Kourtney hasn’t felt this strongly about anyone in a while and can see a forever with Travis.” Bustle has reached out to the couple’s reps for comment and will update this story as soon as we hear back.

“Although the couple hasn’t been together for a while, they’ve known each other for years and have a strong connection,” the outlet’s insider continued. “Kourtney's family hasn’t seen her this happy in a while and they love Travis. The couple’s kids get along great and that has made things much easier for them.”

The pair’s recent Instagram captions and comments only support the insider’s claims that marriage might be around the corner. Last week, for example, the musician shared a series of pictures from their recent vacation, which included a photo of Barker’s hand caressing the Keeping Up with the Kardashian star’s bum. “Anywhere with you,” he captioned the post. “EVERYWHERE,” Kourtney commented.

The Poosh founder also took to social media following their romantic getaway to share a steamy photo. “Just like heaven,” she wrote alongside an image of her kissing the drummer with her legs wrapped around him. “EVERYTHING,” Barker commented alongside a black heart emoji. And now that we know that the couple might be considering walking down the aisle, we can’t help but wonder if “EVERYTHING” includes a marriage proposal.

At this point, it’s too soon to tell what the future holds for Kardashian and Barker. However, all signs point to the couple being head over heels in love. Just last month, Barker posted a series of NSFW photos on Instagram in honor of Kardashian’s birthday. “I F*CKING LOVE YOU!” he captioned the post, which included pictures of them making out in public. “YOU’RE A BLESSING TO THIS WORLD. HAPPY BIRTHDAY @kourtneykardash.” A few days prior, he tagged Kardashian in a photo on Instagram of him throwing drumsticks in the air. “All day I dream about sex w/ you,” he wrote, proving that subtlety isn’t his strong suit.

Earlier in their relationship, Kourtney wrote Travis a variety of romantic love notes, which proved that the couple had strong feelings for one another from the very beginning. “I love you,” the reality star wrote in one of her notes in her signature handwriting. “To lots of fun adventures,” she wrote in another love letter to her boyfriend. “May we destroy each other completely.”