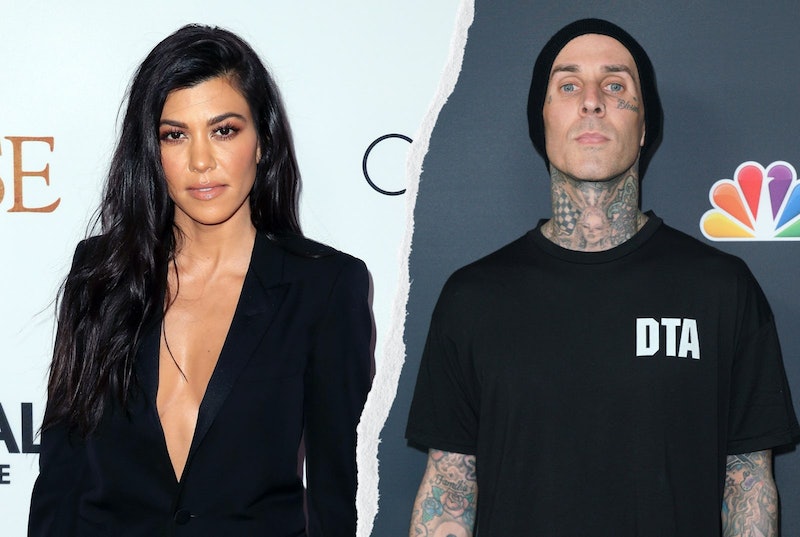 Travis Barker is done keeping it PG while talking about girlfriend Kourtney Kardashian. In a recent photo he shared of himself playing the drums, the Blink-182 member included a very NSFW caption that was definitely about the reality star. “All day I dream about sex w/ you,” the drummer wrote. He also tagged Kardashian in the post, proving that subtlety isn’t his strong suit.

While nothing could’ve prepared us for Barker’s unexpected and steamy caption, the 45-year-old drummer has made it very clear in recent weeks that his relationship with the Poosh founder is serious. On April 9, for example, People reported that the musician was photographed with a “Kourtney” tattoo located above his left nipple. It’s also likely that this is not the only tattoo that Barker has gotten in Kardashian’s honor.

Late last month, the drummer took to Instagram to share a photo of some new ink on his upper thigh, which reads, “You’re so cool.” The quote is from Quentin Tarantino’s True Romance, a film that seemingly means a lot to the couple based on their social media history. Before they were even confirmed to be dating, Kardashian shared a still from the movie on her feed in January, which she captioned with a red heart.

Barker’s latest Instagram caption and chest tattoo suggest that the days of playing coy about their relationship are over. However, even before he got the KUWTK star’s name tattooed and started publicly expressing his sexual fantasies on social media, the drummer would gush over his girlfriend publicly in a more family-friendly ways.

In early March, Barker spoke openly about whether or not he prefers dating women with children on The Drew Barrymore Show. “I’ve done both up until now,” he revealed, adding that dating women without children has been a challenge in the past because he couldn’t give those relationships the time and attention they needed. “Now I’m spending time with a woman who’s a great mom, who’s a great friend, and you don’t have to worry about any of those things. It just comes natural, it’s like a maturity thing.”

People first confirmed their relationship in a report published on Jan. 24. “They’ve been dating for about a month or two,” an insider told the outlet at the time, adding that “Travis has liked her for a while.” On Feb. 17, Kardashian confirmed their romance herself when she shared a photo of them holding hands on Instagram. Barker later reposted the photo to his Instagram story and dropped a heart emoji in the comments.

Most recently, the pair went took their kids on a joint family ski trip. And in a TikTok shared by Barker’s 15-year-old daughter, Alabama, Kardashian officially referred to the drummer as her “boyfriend.” Then, on April 5, Barker shared some additional footage from their trip, which included clips of the couple holding each other close at the resort and going tubing down a snowy hill together. “Real is rare,” he wrote.

More like this
Khloé Kardashian Writes Touching Instagram Tribute To Tristan Thompson’s Mother
By Alyssa Lapid
Kim Kardashian & Kylie Jenner Squabble Over Skims On Instagram
By Alyssa Lapid
Travis Barker's New Tattoo Is Causing Some Awkward Confusion Among Fans
By Stephanie Topacio Long
Kourtney Kardashian's Daughter Penelope Rates Mason’s Sneakers On TikTok
By Alyssa Lapid
Get Even More From Bustle — Sign Up For The Newsletter
From hair trends to relationship advice, our daily newsletter has everything you need to sound like a person who’s on TikTok, even if you aren’t.